Holocaust in the Indian Urdu Press

The Holocaust (Shoah) is one of the darkest chapters in modern history. India has its own history of communal riots and organized violence but little academic or general interest in studies of genocide and violence. Hence, there is only a limited awareness about the Holocaust, both among intellectuals and the public. Indian Urdu press, however, does at times refer to the holocaust but it largely sees it through the prism of the Israeli-Palestinian conflict. As one looks into the way the Holocaust is portrayed in the Indian Urdu press, one finds a general lack of awareness and at times a degree of contempt. There are also instances when one finds subtle denials or minimization of the Holocaust.

Urdu is a major language in India and is identified as the language of Muslims. Though all Indian Muslims do not speak Urdu but a dominant section of Urdu speakers are Muslims. Urdu is widely spoken in north, east and central parts of India as well as in some pockets in southern and western India. According to the Registrar of Newspapers for India in print media, Urdu press is the third largest in terms of circulation and readership.

Exclusive coverage of the Holocaust in the Urdu press is not frequent and largely comes within the context of Israeli-Palestinian conflict whereby Israel is portrayed as a usurper and occupying state that was illegitimately imposed on Palestinians by the colonial powers. Significantly, criticism of Israel is colored in religious undertone so much so that Jews are at times referred to as the divinely ‘condemned’ community. Prolonged Palestinian statelessness and sense of victimhood evoke emotional reaction in the Urdu press. Serious concerns about the status of Jerusalem and the Al-Aqsa further complicate understanding of the conflict. 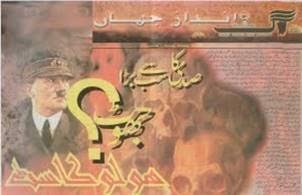 Discussions on the Israeli society offer insights into how the Urdu press views the Holocaust. Frequently the Israeli society is referred to as degenerated leading to a majority of its Jewish population feeling disenchanted with the ‘Zionist homeland’ and migrating to Europe and the US. In the same breath, it is argued that young Israelis do not care about the Holocaust and do not relate with the sentiments of the older generation that came to mandate Palestine to save themselves from the Nazi atrocities. Implicitly, it is suggested that the Holocaust was an excuse to migrate to Palestine and establish a ‘Jewish’ state. One also sees speculations that Israel is losing its sheen among the international community and its supporters are abandoning it because of its inhumane and oppressive behavior against the Palestinians.

As noted above, one rarely finds exclusive coverage of the Holocaust but subtle denials are hard to miss. Broadly, minimization and denial revolves around three themes: a) Jews used the Holocaust to usurp Palestinian land and claim a national home; b) number of victims in the Holocaust was utterly exaggerated to gain international sympathy; and c) the Holocaust did not take place.

One finds a number of examples of suggestions that Jews claimed persecution at the hands of Nazi Germany to leverage their claim for a ‘National Home’ in Palestine. For example, while discussing the freedom flotilla incident (May 2010), an editorial in Roznama Munsif, a Hyderabad-based daily, argued that, “The worst incident in history of the world was the creation of the Zionist state of Israel in 1948, a slap in the face of Islamic world. The so-called story of the holocaust against Jews at the hands of Nazis was made an excuse to establish Israel, the cursed nation, in turn, has made life of Palestinians a hell and has pushed them out of their home forcing them to live in refugee camps (emphasis added).” Similarly, Roznama Sahafat in its editorial on June 3, 2010 refers to the Holocaust as a tool to leverage global sympathy for Jews. In a column in Urdu Times on June 27, 2010, the author argues that younger Jews do not care about the Holocaust and are migrating out of Israel because they do not relate to such incident. One can see a clear suggestion that perhaps the Holocaust is either a myth or at least was exaggerated in its magnitude to gain global sympathy for the creation of Israel.

One can find similar examples in other newspapers too; for example a popular Urdu daily Rashtriya Sahara on October 20, 2012, while discussing the Iran Nuclear issue and Israeli opposition to any deal argued that Israel is trying to evoke controversy and wishes to play victim as it did with regard to the Holocaust to gain sympathies of the international community. It said: “Israel has made it an issue [Iranian nuclear program] of existential threat and the Jewish lobby has started to put pressure on US Senate to act against Iran … Obama is well aware of the situation but cannot go against the Senate even then he has refused to declare a ‘red line’ against Iranian nuclear program … The point is that Israel wants to use the Iranian nuclear program to gain international support as it has always used the Holocaust (emphasis added).”

The problem can be placed within the context of lack of resolution of the Israeli-Palestinian conflict and unwillingness on both sides to find a solution. Continued occupation of Palestinian territories, settlements, wars in Gaza, perceptions about oppression of Palestinians and concern about Al-Aqsa propel many in the Urdu press to join the bandwagon of the Holocaust denial or minimization. Though marginal, there is another angle to portrayal of the Holocaust, that is, justification of the mass killings of Jews at the hands of Nazi Germany as a deserved “divine punishment.” It is argued that Jews are a “cursed” community and the God keeps punishing them because they have been “disobedient” of his injunctions, and hence deserved to be killed. In other words, the Holocaust was justified.

One can understand a religious or ideological affinity with the Palestinian cause, and hence, a legitimate and rational criticism of Israeli actions or policies against Palestinians or in the occupied territories. The portrayal of Jews as “violent,” “inhuman” and “lunatic” people, however, seems to emanate from religious zeal, especially because many cite the Islamic Holy book, Quran, and Hadith (prophetic traditions) to condemn Jews and argue that they are the people who have been “condemned” for their disobedience to the wills of Allah. This leads Urdu newspapers to often use a diabolical language and religious-historical symbolism to condemn Israel. At times it is argued that the Bani Israel (Quranic term for Jews) are indeed a “cursed” people and a divine intervention will lead to the end of Jewish occupation of Palestine and the Holy city of Jerusalem. There are frequent instances when the Holocaust is referred to as “so called” implying that it never happened or at least raising doubts about its occurrence or magnitude.

The Holocaust is an important issue but its awareness is minimal in India and it attracts little attention in the mainstream media. It does, however, attract some attention in Indian Urdu press but is largely qualified within the context of Israeli-Palestinian conflict. India, despite suffering from problems of mass killings and communal riots, does not have academic or research institutions focusing on the study of causes, consequences or prevention of genocides, and hence there are no institutions that focus on the Holocaust education either. In the Urdu press, one finds a serious lack of awareness and antipathy towards the Holocaust. Being associated with Muslims and Israeli-Palestinian conflict being intertwined with Jewish-Muslim problem, the coverage of the Holocaust in the Urdu press becomes more complex and problematic. Whenever references to the Holocaust are made, they are done so with the sole purpose of presenting the Holocaust as the primary reason for the current state of affairs of the Palestinian people. Though compared to the Pakistani press the denial and minimization of the Holocaust is less, it is nevertheless present.

Bio:
Dr. Md. Muddassir Quamar is an Associate Fellow at the Institute of Defense Studies and Analyses, New Delhi. The essay is an abridged version of a paper presented at the international conference on “Mass Violence and Memory” held in May 2016 at O P Jindal Global University, Sonipat, Haryana, India, co-convened by Dr. Navras Jaat Aafreedi, the guest editor of this special issue of Café Dissensus.

Tags: Holocaust, India, Israel, Jews
From: Issue 1/ Beyond Mumbai, 2012
← Indian Muslim Denial of the Holocaust: Who are these Muslims?
What India Learns about Hitler and the Holocaust →
No comments yet