Revisiting the ‘Karachi Resolution’: The Genealogy of Reintroducing Capital Punishment in India 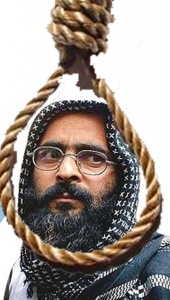 “Now nobody can accuse me of being weak”

(The Union Home Minister, Govt. of India, said this in the aftermath of Afzal Kasab’s execution on 21st November, 2012)

In March, 1931, All India Congress Committee held its annual session in Karachi; a decisive meeting for Indian politics. Vallabhbhai Patel shot to political limelight in that session and the entire session was conducted in the backdrop of the execution of Bhagat Singh, Sukhdev, and Rajguru on 23 March, 1931. That session is also reckonable for a very incisive and prospective resolution drafted at the end of the conference, one which is counted as the precursor to the Indian constitution. In this piece on capital punishment and its socio-political trajectories in independent India, we fall back on that resolution, especially the penultimate proposition under the header, “Fundamental Rights and Duties” where it was unanimously stated, “There Shall be no Capital Punishment”.

A more informed knowledge of history indicates that these Fundamental Rights were induced by the Gandhian philosophy of Swaraj for the masses. Gandhi failed to save the lives of Bhagat Singh and his colleagues from capital punishment, in spite of his untiring political maneuvering. This overwhelming sense of failure and the disgust against colonial subversive politics were discussed in that apex nationalist party consortium. The outcome was the resolution which reflected the need for an alternative politics premised on tolerance and sacrifice as encapsulated in the Indian tradition of ahimsa (non-violence). This pursuit of alterity in political dispensation amidst calls for a straight rupture from the colonial punitive system and its coercive mechanism is inspirational. The independence of India was not a mere political transition; it was conceived as a paradigmatic shift towards a totally new mode of governance. Unfortunately, however, this idea of differential political formation gradually disappeared from the political imaginary as India achieved its freedom from colonial rule. The question is how this seminal aspect of juridical and governance system, one which is diametrically opposed to the precepts of Gandhi, became lodged in the constitution of sovereign India.  Should we read this disregard as a shift away from Gandhian precepts towards an India after Gandhi? The “after” in this phrase signifies both the continuation and discontinuation of the Gandhian fervor. In November 2012, when India voted against the UN General Assembly draft resolution to ban capital punishment, this enquiry turns into a pressing question: how and why?

There are several ways to analyze this seismic shift in perception regarding the format of punishment over a span of twenty odd years. Our Home Minister might feel immunized from being jeered at by the opposition after the execution of Kasab. Questions, however, remain as to how this shift is to be understood, especially given the fact that this honorable Home Minister also belongs to the same political outfit which once abnegated this form of punishment on grounds of the negation of colonial jurisdiction. To understand this, we have to return to the famous Nehru-Patel debate that ranged from issues of development to the drafting of constitutional procedures. The basic point of difference between them was on issues related to the Gandhian prescription and their economical and sociological justification in the changing scenario. Patel was a stickler in some sense for Gandhian ideals. After his death in 1950, India gradually shifted towards the Nehruvian era.

Even though Nehru was equally obliged to Gandhi, he gave all freedom to the committee which was entrusted to draft the constitution. As many critics including Sudipta Kaviraj and Partha Chatterjee have pointed out, this drafting committee which retained the IPC (Indian Penal Code), 1860, derived many of the rudimentary principles from the British constitution. The bitterness Ambedkar harbored against Gandhi’s alleged bias towards politico-religiosity that smacks of Hindu hierarchy might also explain the discontinuation of Gandhian ideals. The Gandhian ideology of non-violence is therefore subsumed in the “culture of cruelty” that has since been perpetuated. This “culture of cruelty” can be likened to the idea of “public revenge” described by Francis Bacon, the noted empiricist of 17th century, in his essay, Of Revenge. The revenge on the convict wrapped in the palliative of justice and security is sanctioned both by the state and the public and thus it is celebrated and fed by the popular imagination. But the major moot point is that decolonization as a political process became sluggish after Gandhi’s assassination. Ashis Nandy describes Gandhi’s assassination as “annihilation” as it was an attempt to destroy not just Gandhi, but the ideology as a whole.

The question is: was not that “annihilation” also committed at the level of ideological abstraction? The adoption of IPC 1860 is a further corroboration of this transition/continuation of colonial rule in postcolonial India. Partha Chatterjee and Dipesh Chakraborty have substantially argued that this façade of “postcolonial” was a kind of “anachronistic” force that cohabited with colonial lineages. The constitutional framework duly substantiates this polemic. It is true that execution as a punitive process had several pre-colonial linkages, but its legal institutionalization is an outright colonial construct. The Vedic scriptures, Manusamhita and Bhagvada Gita talk of capital punishment in a supportive vein but they insist that capital punishment should be performed by the right person of character. In fact, they are more in favour of the karmic justice which the convict will suffer in the next birth for his Karma, his sin. The notion of capital punishment and the question of the character of the executer is problematic in the religious scriptures. However, when capital punishment was institutionalized during the British regime, it was not based on Hindu scriptures.

Like several ideas of law and governance this continuation of the colonial influence helped the new political dispensation in liberated India. Atul Kohli has shown how a discrepancy occurred between two opposing political and economical imperatives. The new regime wanted to uphold a moral ground of justice and equity through penetration of the governmental institution in remote areas, but its economic capacity to implement such projects was stymied by its political obligation to secure vote. The point that needs to be highlighted is how this political imperative and the economic incapacity gradually opted for a law-generating discursive power for a new hegemony of consent. The law was planned to secure political goals and to thwart any possibility of insurrection. Of course the huge nationalist legitimacy in a way contributed in evoking the stringency of law in the guise of protection and justice. Gandhian ideas of cooperative development, the politics of bare self, and its philosophic orientation was an obvious victim of that real-politik in the late Nehruvian and the following regimes. During Indira Gandhi’s regime this logistic process was further reinforced and the law was ascribed the highest moral authority. Therefore it is arguably a proven fact that more executions were committed during the period between 1970 and 1985, excluding the large number of casualties in political encounters.

This discussion begets the following speculations/conclusions: For one, should we say that the declining Gandhian influence also led Congress to compromise with their anti-colonial ideology, with the obvious indication of this being the unhesitant adoption of death penalty? Moreover, the nationalist legitimacy and political hegemony were combined to reinforce the idea of justice and punitive ethics as an extension of the colonial rule, the derivative logic of the Indian postcolonial thinking. Apart from these two points, we can probably further argue that today we can bargain with the state about its incomplete agenda of decolonization and its neo-colonial state apparatus to carry an inflated nationalist balloon to garner ideological and popular consent for capital punishment. But that bargain would perhaps take years to yield results in the present context.

Tags: death penalty, Gandhian Philosophy, Karachi Resolution, Manusamhita, Swaraj
From: Issue 5/Death Penalty
← Who is the Real Criminal? Questions after the Punishment
An Endangered Clause: The Death Penalty in Zambia →
No comments yet