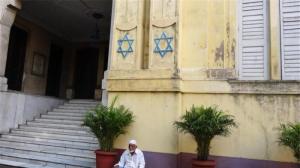 Kolkata, India – Generations of Muslim families have been taking care of the maintenance of three synagogues in the eastern Indian city of Kolkata, which was once home to a thriving Jewish community.

The city’s Jewish population has dwindled over the decades to just about 20 as compared to 3,000 at its peak before the country became independent from British rule in 1947.

Khalil Khan, 71, has been working as caretaker of Beth El synagogue, one of the city’s three synagogues, for the past 55 years. His two sons – Anwar and Siraj – have chosen the same job.

“It takes a week to clean the entire structure, its furniture and artifacts. By Friday afternoon, the work has to be complete,” said Rabbul Khan, whose father and two uncles have also previously worked at the Maghen David synagogue.

“This is necessary for the namaaz [prayers] that they perform on Saturdays,” he told Al Jazeera.

However, there are no regular services conducted on Saturdays nowadays: only one person from the Jewish community visits each of the synagogues on Friday evenings – to light a candle.

Naseer Sheikh landed the job 56 years ago after his uncle left for his native village in neighbouring Odisha state, where all the caretakers come from. He is 80 years old and is still working, and is joined by his son Osim.

While Siraj, his father Khalil and Osim are entrusted with the work of cleaning and maintaining the synagogue, Naseer’s job is to collect the rent from about 100 shops in the vicinity, since the property still belongs to the Jewish community.

Several large and landmark buildings, including the city’s synagogues, tell the story of Kolkata’s Jewish heritage. According to Jael Silliman, a Jewish resident of Kolkata who has put together a digital archive of the Jewish community in the city, the Maghen David synagogue is one of the largest in Asia.

Beth El, NevehShalome and Maghen David synagogues are each taken care of by four men whose forefathers have also had the job.

The recent bombarding of the Gaza Strip by Israel did not quite affect their religious sentiment or their relationship with the synagogue.

“The wars are taking place in other countries. If the Jews had any issues with our religion, they wouldn’t have hired us. Religion has its own place, while we have ours. This is something that we never think of. The Jews respect us and we respect them,” Rabbul said.

“The Quran, the Torah and the Bible have similar origins. How then could we be fighting?” Naseer said, before he walked away to perform his namaaz under the shed in the synagogue’s compound.

Noor Singh, the lone Hindu caretaker, spoke about the synagogue’s role in his life. “My father raised me by working here, and today I have the same job. It is God’s home, and it is my livelihood. I would give my life for this place,” he told Al Jazeera.

According to Professor AmlanDasgupta from Jadavpur University, the realities of daily life are very different from the politics being played out, especially in Kolkata, which has always welcomed immigrants.

The city, he said, “is a product of the resulting multiethnicity and multiculturalism”.

“Communal coexistence has been common across India and hence we don’t think of it as important. Yet, there is also a problem in becoming conscious about it,” Dasgupta told Al Jazeera. His students collaborated in the creation of the digital archive.

According to Silliman, the Jews and Muslims have a common history because of their roots in the Middle East.

“In Kolkata, Jewish families hired Muslim cooks because they ate only halal meat. Hindu families would not want to work in Jewish homes because of the meat being cooked. Our music, food habits are also very similar and people tend to forget that the Arab world is the seat of the Jewish community. Even the early immigrants looked like present-day Arabs, before they began to reflect a Judeo-British identity,” she said.

It is no wonder then that the Jewish Girls’ School’s students are mostly Muslim.

According to Silliman, the area around the Jewish Girls’ School, in its original location on Pollock Street, was where the affluent Jews once lived.

Today, the only remnant of a Jewish heritage in the school is the “Star of David” on the school uniforms, and having holidays on three Jewish festival days.

The Jews in Kolkata came from Baghdad about 220 years ago, and established themselves as successful businessmen. They were also major exporters of opium.

The Beth El synagogue was built in 1856 on Pollock Street to meet the needs of, at the time, a rapidly expanding community. Its construction was funded by two of the wealthiest men in the community – Ezekiel Judah and David Joseph Ezra.

In the 1940s, Kolkata’s Jews began to leave because of the violence preceding the partition of the country into India and Pakistan. Fearing the loss of their businesses as India began to nationalise its banks after independence, they emigrated to western countries in large numbers. Today, there are just about 20 Jews left in Kolkata – the oldest resident died last month at the age of 97.

A religious service was performed at the Maghen David synagogue last September, the first in 25 years, when a rabbi visited from the capital, New Delhi.

The six-member Jewish board manages the synagogues, as well as the affairs of the remaining Jewish sites in the city – several properties, a school each for girls and boys, and a cemetery.

All of the men employed at the synagogues reside alone and visit their families every three to four months. With their meagre salary, they said that it would not be possible to make ends meet if they were to bring their families to live with them in Kolkata.

Dasgupta said that it is evident that the sense of trust and security that they share with the Jewish community is stronger than the pursuit for better opportunity outside.

Siraj and Osim each have a son and a daughter, and both are clear about not pushing their sons into the same job. Osim’s son is studying in a school in his native village, while Siraj’s 18-year-old son is already working at a hotel in the southern city of Chennai.

“We work here and keep it clean, as we would have done with our mosque. But boys in this generation won’t be interested in such work. We are educating them and they would like to take up better jobs,” Siraj told Al Jazeera.

Author:
Priyanka Borpujari is an independent journalist based in Mumbai, India. She writes on human rights and development. She was the 2012-2013 International Women’s Media Foundation Elizabeth Neuffer Fellow.

Tags: Jews, Muslims, South Asia
From: Issue 1/ Beyond Mumbai, 2012
← For India’s Largest Jewish Community, One Muslim Makes All the Tombstones
Muslim-Jewish Relations in Sidi Janjira →
No comments yet