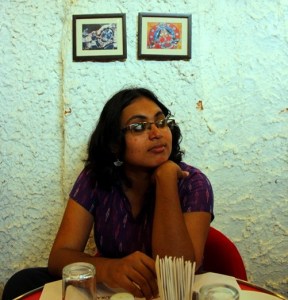 As evening purples into night under a summer city sky which languidly lights her crimson smoke only past ten, they start drifting towards the blue room. Some wander in, parking their bicycles and scuffing their feet, from dusty alleys which while away whole afternoons sipping strong coffee, sitting on sun-drenched wooden benches outside bake-houses with names calligraphed in Arabic. Some, already parked on rickety wooden seats, nursing their beer, grunt and rise to their feet and move towards the little alcove beside the fantastically papered toilet doors. And some carry on with their drinking and their conversation, their newspapers and their football matches, as though the blue room did not even exist.

But exist it does, and any Monday evening if you’ll go through S−−allee, turn right at F−−strasse and dip into this little bar at the corner of D−−strasse, and then just follow the thin trickle of people heading towards the plain backroom door beside the fantastically papered toilet doors − you can’t miss those toilet doors, and anyway you could always ask the bartender for the toilets − you could also enter the blue room. I can’t guarantee that the blue room will enchant you or transport you to a magical destination. That depends on you. But enter, ducking your head, since the programme has already begun and you don’t want people to boo you. Enter, and settle down amicably on a humble beer carton beside amiable strangers who wouldn’t give you the time of day if you were to encounter them in the U-bahn tomorrow. I hope you’ve brought a beer or some drink inside with you; it’s bad form to go out for a refill while a session is on. Place your mug between your knees − you’ll need to nurse it for a while − and light a cigarette if you smoke. Go ahead, take a drag and let out the smoke. Why do you think they call it the blue room? The walls, the floors, the ceiling − all are a decrepit nondescript colour. The blue smoke wafts about the room from a dozen unguarded lips, curling around bottles, murmuring between golden locks.

Some dude is talking, but as you take a couple of sips and a drag or two, you realize you can understand everything he’s saying perfectly. Is this then the magic of the blue room? Are you all smoking some mystical hash that gives you a collective illusion or makes you understand one another’s languages? Before you leap up to propose restarting work on the tower of Babel, take a deep breath and listen again. Carefully. He’s talking in English. In this godforsaken though magnificent city where, every morning, handsome Herr Adler at the ALDI rewards your much-abused danke-schön with an ice-blue smile, in this city where insurance clerks and salesmen have gone into a strange new ritual of silence while typing out their replies to your queries on Google Translate, where you chew down a 3-Euro falafel every evening even though the bratwurst is cheaper because you miss spicy food, yes, here in this city, a brown-haired, blue-eyed man is holding on to a microphone and talking in English, and these cold, chiselled, golden-haired giants are nodding and laughing. And slowly you realize that you, too, are nodding and laughing, and then you realize that this is the magic of the blue room.

But you’re wrong. The room has yet to unleash its true power.

The guy turns out to be Australian – or maybe he’s from New Zealand or Sweden, who cares? – and you’ve already forgotten his features, and even the words he spoke, but you can still remember the distant timbre of his deep but clear voice, and you let yourself sink a little lower against the wall and close your eyes. The beer and the smoke and the warmth of the room enfold you to their bosom. Then a gentle yet sharp sound knocks on your half-slumbering soul – a dragging of a chair, a shuffling of feet, another sharp knock, and then, oh then, that guitar starts to weep. And that deep un-English voice rises aloft in an English paean to all those who wearily move their feet and count their Euros and munch their falafel and speak in borrowed tongues amid the crowded city streets, all those whose sweat and grime add colour to modern-day fairytale lands with names like Kreuzberg and Neukölln.

The song ends, there is an enthusiastic smattering of applause; a few well-manicured hands raise their beer-bottles to their foreheads in a casual salute. You still sit with your temple pressed against the cold, comforting wall. Reluctantly, you open your eyes, tap off your ash, and straighten your shoulders to take another sip. A vacuum envelops you. From a great distance, you can barely hear the singer talking about the writing of this song. You squint at him as through zoom lenses. And yet, after a playful sip of his Jagermeister, when he picks up his guitar again, your chest tightens as though the first note is plucked from the taut strings of your heart. This time, it’s an urban ballad of love and loss, of a road trip in search of pain that is destined to end at the bottom of a well.

It’s scary, isn’t it, to loosen your fingers on the last fragile bits of fabric that seem to be keeping your soul anchored to the earth? I know it is: I’ve been there, done it, and got the T-shirt. Literally. An inappropriately pink “First we take Manhattan, then we take Berlin” T-shirt for 5 Euros sold by a bearded immigrant near Checkpoint Charlie. Some of them think you’re an immigrant. Some are even nice, like the coffee-vendor who notes with crinkled eyes your black hair and dusky skin and colourful scarf and calls you señorita. Who are you if you’re neither an immigrant nor a tourist nor a native? Is that why all those charming smiles seem to wash right off you, because they were never meant for you? Is that why you dance alone, or empty small shot-glasses of Jim Beam alone, alone in the shadows but for the light of the bartender’s encouraging smile? For the bartender is also, by definition, a wayfarer like you. I know why you cling on to that thin black sweater as you lean against the wall, your eyes closed, drinking in the music. I know it’s scary, but could you let it go? Only then will you allow the blue room to work its magic fully.

The group of three on your left moves imperceptibly closer to each other; the girl leans against one guy and holds the other’s hand. The couple on your right does not move, but you can see them relax against each other, letting the warmth spill over and run from skin to skin, tank top to T-shirt. You never noticed, did you, that everyone here is young? As you hold on tightly to your loneliness, the ludicrous thought crosses your mind that immortality must feel something like this. You let out a soft chuckle, then bite it off quickly, apologetically.

Something ebbs out of the room with the blue smoke, borne along by the music. Something washes off you, and off the others lounging in the room. But you can’t relax your fingers gripping the sweater. You’re not letting it go.

When the last note vibrates off the walls, there is silence – a warm, comfortable silence that lasts for a second or two. By the time you open your eyes, the room is a soft blur of motion – shaking hands, swinging satchels and nodding golden-brown hair – and you realize you are stepping back into ordinariness from the brink of something unnameable. Voices rise, beer-mugs clink. The sweater slips through your fingers, but it’s too late. It’s time to don it again and step out into the corridor where you’re the only one who feels an elusive chill. Like a tropical bird blown off-course, you stumblingly navigate the laughter and the tall, warm bodies until you suddenly find yourself in front of the fantastically papered toilet doors.

It is in front of those toilet doors that I wait to waylay you. But you don’t notice me. You’re looking at those doors, with not a symbol to guide you to the right one but the plethora of glossy paper cuttings pasted all over them. The smiling faces of celebrities cut out from magazines announce that one door is unambiguously for men while the other is for women. You push open the latter and enter. I lean against the wall and wait.

I’m just considering rolling a cigarette when the door full of Marilyn look-alikes yields to reveal you again. I’m vaguely impressed that you didn’t stop to powder your nose or brush your hair or just lounge about and chat, but then I remember you came alone. I push myself off the wall. But you recoil. You don’t even look up at my face – I’m probably a foot taller than you – but you recoil from the very shape of me, from my sudden movement, and walk past me with barely concealed nervousness. I notice the sharp glance you dart towards the beer-bottle in my hand and the involuntary clench of your fingers on your black sweater. That stops me in my tracks. I stand around stupidly as you pace rapidly away, your head slightly bowed, your arms crossed tightly across your chest.

Hands clap down on my shoulders and draw me close. Hearty voices hail me. Everyone is happy and vaguely grateful, though the air of the blue room has almost completely dissipated. Someone wants to introduce me to the singer, another wants to discuss plans for an activist group’s meeting next week in the blue room.

The door opens and closes. I catch a glimpse of black passing through. I allow myself to be drawn into the warmth of my circle of friends and acquaintances as you exit into the brilliantly lit night and are lost forever in the maelstrom of the city.

I know you’ll be back. Perhaps next Monday, perhaps years later. You’ll carry the memory of the blue room within, like a word that has been choked off somewhere between your chest and your throat. Perhaps you’ll leave the city with it, perhaps you’ll take it with you to the other side of the globe. But you’ll be back, and this time, your fingers will not clutch your sweater or your satchel quite so desperately. This time, if you let me, I can reveal to you the magic of the blue room in its entirety. For that’s the kind of sorcerer I am, and my brothers lurk in corners of every city where lonesome figures sweep by with bowed heads, wrapping their loneliness tight about their frail bodies, harkening to the music they cannot hear, tormented by the solace they seek yet fear.

Aparna Nandakumar has dabbled in many things – classical dance, amateur theatre, publishing, unpaid content writing and even a travel blog – but she lost her heart to the power of words a long time ago. She recently migrated from her life as a cultural studies researcher in Hyderabad to delve into the passion and pain of teaching young women to love literature in her native state of Kerala. Her work has appeared in Atticus Review and A Story in 100 Words, and is forthcoming in Red River Review. She blogs at https://aparnanandakumar.wordpress.com/.