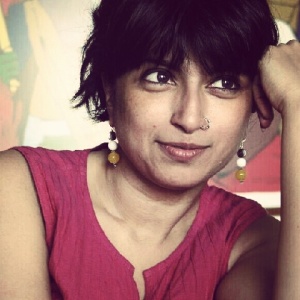 I go to bed with Anwar every night. Ashim doesn’t usually get back from the hospital till eight or eight-thirty in the evening. His workload has increased since his promotion two years ago. He has a cup of tea when he’s back. I give him company as we watch TV. We talk about this and that – new regulations at the hospital, fresh problems that patients face every day, what I did all day long, how the maid’s husband gets drunk, whom I met at the library today… and so on. As the night progresses, we run out of breath, our conversation dwindles and whirls around along a blind lane. He’s in the habit of bathing every night. When he goes to the bathroom I heat the food. Then, after having our meal in near total silence, it’s time to go to bed in our respective rooms. The large bookcase is in my room. Sometimes Ashim comes in to pick a book for the night. I make the bed with great concentration while he’s there. I don’t check whether he lingers at the door before leaving. I wonder how long it will be before I can turn the light out. And before Anwar comes.

As soon as I lower my head on the pillow and switch off the bedside lamp, I’m on the road of a war-devastated city, holding a suitcase, dust flying everywhere, and with it, lime, ash and dry leaves. I’m walking in bewilderment past buildings destroyed by bombs. I used to know several people in this city, but I cannot recognise a single one of the men and women rushing past me with bundled up possessions, clutching their children’s hands. I’m left behind by all of them. Smoke is rising from many of the buildings. Some of them are still on fire. Dogs are running about, howling uncontrollably. A fire-engine drives towards the shops behind me, its siren wailing grotesquely. None of the shops is intact, each of them has had its glass-front shattered. It’s obvious that they have been emptied out. People have taken whatever they could, to survive for a few days. Where am I going? Some days, I remember. On others, I don’t. I’m not even dressed in a sari. I’ve got a blue and black salwar on. Without a dupatta. I think it was a gift from Surajit’s wife on a long-forgotten wedding anniversary. I’ve never worn it before. I keep walking. My slippers are chafing so much that I’m getting blisters on my feet. The sun is burning down on my neck. It’s unbearably hot. Sounds of firing and explosions can still be heard in the distance somewhere. I turn over on my side. I remember that the war has been going on for a month. My friends have all left this city one by one. What have I been clinging on for? It’s not as though I have nowhere to go. Standing at a three-way junction I’m wondering which road to take when, or approximately when, a jeep draws up and Anwar leans out of the vehicle to say, ‘Get in.’

Maybe I know Anwar. Let us assume that the small motor-repairing shop in the Jhingri Mohalla belongs to him. Three or four boys work there, smeared in oil and grime. Some time ago, the front door of our car developed a problem and could not be shut properly. Singh-ji took the car to that same shop on the way back from the market. When told that it was the doctor’s car, Anwar himself came out to examine it. The door was repaired in fifteen minutes, and I observed Anwar, well-built, with blue veins rising on the tight muscles of his hands and arms, beads of perspiration on his forehead. I noticed the firm set of his jaws while he worked. I had met his sister Saira while teaching at a school in Jhingri Mohalla as part of my work with the mahila samaj. Perhaps I saw him again, two or three times, on my way to buy something from Shamim’s shop in the evening. Had he actually stood up in deference when I passed, saying, I hope the doctor is well?

I get into the vehicle without a word. The jeep is quite old. Two or three bags, bundles, plastic packets and gunny sacks are piled in it.

‘Put the suitcase in the back.’ Holding the steering with one hand, Anwar makes room on the back seat. I get another pillow from the other side of the bed and place it near me.

‘How far are you going?’ I know I have to reach the camp by the sea, five hundred miles away, beyond several other cities. Then get onto a ship somehow and sail to a different country. Let’s see how far Anwar is going.

‘The ship is arriving tomorrow evening. I believe this is the last one. They won’t be able to send another. Everyone from home is at the camp already. I have to reach by tomorrow morning.’ Anwar drives, looking at the road.

I watch Anwar’s muscular arms and the hands on the steering wheel, the blue veins, the beads of perspiration on his forehead. Where did you live, Anwar? Whom do you mean by everyone from home? Are you married, Anwar? Does your wife wear pink nail-polish on her toes like Saira? ‘I’m going to the camp too,’ I say.

The jeep has left the city to race along the highway now. Columns of smoke can be seen here and there in the distance, along with intermittent deafeningly loud explosions. The smell of burnt gunpowder lingers in the air. Several cars and a bus abandoned along the road stand terminally. Have the soldiers passed this way? Anwar has put on some music, Mohammed Rafi singing ‘Ehsan tera hoga mujhpar’ – this will be your kindness upon me.’

‘Has your motor repairing shop survived?’

‘Who wants to go back? The house hasn’t survived either, eventually. It went up in fire the evening before last. I wasn’t home. My parents couldn’t be rescued. Couldn’t be buried either. The lord will forgive me.’

Anwar’s jaws are now set tightly, I notice. Which war is it that has set your jaws so tightly Anwar? I want to hold you right now. Place your jaws on my soft breasts. Let my house go up in flames too. I shan’t go back either. I put a hand lightly on the pillow.

‘Didn’t you say everyone at home has gone to the camp?’

‘The rest have. You used to visit our neighbourhood to teach, didn’t you? We would be very happy when you did.’

Why we, Anwar, you, weren’t you very happy? Did you ever see me when I got out of the car under the burning noonday sun and walked into the school? What colour was my sari that Wednesday, Anwar?

‘Everyone used to respect you.’

Back to ‘everyone’, back to ‘respect’. Didn’t you ever want me Anwar, didn’t you want to touch me? I smile.

Anwar gives me a glance before setting his eyes on the road again. ‘It’s not safe to drive at night, we’ll have to stop in the shelter of the jungle.’

Dimming the headlights, Anwar drives the jeep off the road and down a slope to a spot behind the trees. The highway can barely be seen now. The sky is clear, with an enormous number of stars visible. Switching the headlights off, he lays out a gunny sack next to the vehicle. My legs are numb after the day-long journey in the jeep. Stretching them after getting out, I fill my lungs with air. It no longer smells of gunpowder. The sounds of firing cannot be heard either. Have we left the war-zone? We sit for a long time, leaning back against the wheels of the jeep. Some days Anwar takes bread and bananas out of his bag. Other days it’s just puffed rice and fried grams. However, I never have an appetite. But a suppressed excitement makes a hollow in my stomach. And the chill of the wind on my skin. I draw the shawl closely around myself. Anwar and I don’t talk much. We gaze at the stars. Sometimes, out of caution, he pricks his ears up for sounds. Trucks full of soldiers whoosh past us along the highway. Under the dense darkness of the night the war keeps returning to us. Afterwards we open the doors of the jeep and push the front seats back, converting them into a bench. Then we lie down next to each other. In almost total darkness my fingers search out the creases on Anwar’s face. This is exactly how I have wanted to be blind. Moving my kameez aside, I place Anwar’s muscular hand with the blue veins rising on my stomach. The calloused strong hand clutches my stomach. I tremble. Pressing the pillow to myself I sink my teeth into Anwar’s shoulders. Tears are streaming down my eyes, wetting the pillow, and Anwar is weeping. Anwar’s hand has risen from my stomach to my breasts and still hasn’t stopped. I am getting wet, wet. I’m trying to bring my lips to his ears to tell him, ‘The ship is coming only for us tomorrow, Anwar.’

When I get to this point or somewhere close to it, I sink into sleep. We never make it to the camp. No ship arrives to take us away. Still I put my head on the pillow every night, switch off the bedside lamp, and wait. And Anwar comes.

Arundhati Ghosh loves people and places and writes in Bangla.