The RPD Bill 2014: New Frontiers for Disability Rights or Repackaging the Old? 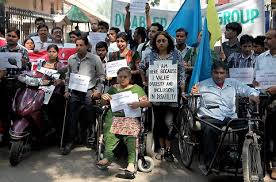 The new Rights of Persons with Disabilities Bill 2014 has been tabled in the Parliament and, instead of excitement and optimism about this new bill, there is serious concern within the disability rights movement. The draft RPD Bill has been on the cards for the last four years and there has been much debate and controversy surrounding the manner in which the final draft of the Bill was made, the inputs made by the government, and the final version presented to the Parliament.[1] How does this Bill serve for the recognition of rights of persons with disabilities? Does it encompass all the requirements of the UNCRPD that it was aimed to have? Does it advance the rights of persons with disabilities significantly from the Persons with Disabilities (Equal Opportunities, Protection of Rights and Full Participation) Act 1995 (“PWD Act”) that is currently in force? I will attempt to answer these questions from the starting point of the definition of persons with disabilities.

Definition of Persons with Disabilities

One of the most controversial and limiting aspects of the PWD Act has been the definition given to “person with disabilities.” Under the PWD Act presently, all entitlements are limited to persons with disabilities, who is defined as persons having 40% or more of any of the seven stated disabilities – blindness, low vision, hearing impairment, locomotor disability, mental retardation, mental illness, and leprosy. This definition was a huge stumbling block as it limits the scope of the benefits under the PWD Act only to persons who fall within this restricted medical definition. By specifying only the above seven different categories of disability with the additional burden of showing that such disability is not less that 40% as certified by a medical authority, the definition of a person with disability becomes extremely narrow, as compared to most progressive disability discrimination legislations the world over.

This definition was a serious issue that was taken up under the RPD Bill drafting where it was mooted that the definition should be inclusive and from a social model as provided under the UNCRPD, which defines a person with disability as “including those who have long-term physical, mental, intellectual or sensory impairments, which in interaction with various barriers may hinder their full and effective participation in society on an equal basis with others.”

Under the present RPD Bill, surprisingly, there are three separate categories of persons with disabilities:

At the very outset, therefore, the law differentiates persons with disabilities into three separate categories.

While the number of disabilities covered under the “benchmark disabilities” is increased from 7 to 19, this is certainly not the way forward for a legislation aimed to address full protection of rights of persons with disabilities. This restricted list of 19 disabilities would still not cover hundreds of other disabilities. For example, under the PWD Act, in the case of Union of India v. Devendra Kumar Pant &Ors.,[2] the Supreme Court had to decide on a matter where a person having colour blindness was promoted to a post which required him to clear a medical fitness test, which included a requirement of colour perception as a minimum standard. The Supreme Court failed to find this as an issue of discrimination under Section 47 (2) of the PWD Act. In doing so, it held that lack of colour perception is neither blindness nor low vision and is therefore apparently not a disability under the Act. The Court held that “it is doubtful whether a person lacking colour perception can claim to be a person entitled to any benefit under the Act.”[3] It was to remove such exclusions from rights guaranteed under the PWD Act, that a broad and all-encompassing definition for persons with disabilities was recommended by the disability rights movement, which was not disability specific, but is only defined as any long-term physical, mental, intellectual or sensory impairment, which hinders a person’s full and effective participation in society equally with others.

This kind of a two definition structure within the draft Bill creates a second class status for all persons who do not have a benchmark disability, as they would not be entitled for any of the tangible benefits listed above. If the Bill is passed in this form, the law would have failed to internalize the key message of the disability rights movement – that disability has to be understood not as an attribute of an individual, but, rather, a complex collection of conditions and barriers, many of which are created by the social environment. From this perspective, disability cannot be medically defined as any specified number of conditions with a percentage of severity. If such a definition of benchmark disabilities is retained in the RPD Bill, it would just be a case of repackaging the old PWD Act in a new bottle.

Jayna Kothari is an advocate practising in the Karnataka High Court and, also, Director, Centre for Law and Policy Research, Bangalore. Her book, The Future of Disabiity Law was published in 2012 by OUP (Delhi).

Tags: Disability, India, RPD Bill 2014, UNCRPD
From: Issue 10/Debating Disability Law in India
← The UNCRPD is common sense
Wither the poor disabled tucked in the corner of their houses… →
2 Comments Post a comment