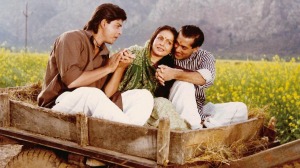 Srija Sanyal (Issue Editor) is associated as a Research Scholar with the Ronin Institute, USA. She has been undertaking research in the field of gender and queer theory in the Indian context. She holds Masters in English Literature from the University of Delhi, India. She is also associated with PopMec Research Blog as Associate Editor working in the field of North American cultural studies. She is currently working on an edited volume on queer representation in Indian films and digital media. As the recipient of Ronin Institute Research Scholarship, her upcoming project includes a monograph on gender and songs in Indian cinema. Her other areas of research interest include gender and visual media, South Asian studies, and women’s writing. Email: srija.sanyal@gmail.com

Aparajita De teaches English at the University of the District of Columbia. Her writings explore contemporary films and popular culture from South Asia and the diaspora to study identity formations through intersectional parameters. She is also experimenting with the personal voice and writes nonfictional and self-autographical accounts that have been published elsewhere. Her academic profile is accessible here.

Aparna Rajesh is a bibliophile who is currently pursuing her second year of bachelor’s in Christ University, Bengaluru. A lover of academia, she is now on an exchange programme in France. Her research interests lie in understanding languages and their representation in mainstream media.

Dr. Shantharaju S is an independent writer and has worked for several documentary films as a cinematographer. He has co-authored a book, Confession, Consent and Hedonism, on OTT and Screen addictions. He is presently teaching in the Department of Media Studies, Christ University, Bengaluru, Karnataka.

Athira Unni is a PhD research scholar at Leeds Beckett University. She completed her MA in English Literature from University of Hyderabad and her first poetry collection Gaea and Other Poems (2020) was published by Writer’s Workshop, Kolkata.

Dr. Debjani Halder is a Filmmaker, Film historian and Film Curator. She has received several National and International Research Fellowship Awards and is a Fellow of National Film Archive of India. She is currently working as Assistant Professor in Department of Film studies and Filmmaking, RV University Bangalore.

Dr. Raj Sony Jalarajan is an Assistant Professor at the Department of Communication, MacEwan University, Edmonton, Canada. Dr. Raj is a professional journalist turned academic who has worked in different demanding positions as a reporter, special correspondent, and producer in several news media channels like BBC, NDTV, Doordarshan, AIR, and Asianet News.

A teacher and a researcher, and a Ph.D. from the University of Calcutta, Dr. Shambhu Nath Banerjee is associated with the Department of Plant Physiology (Ag) as a Guest Faculty. Dr. Banerjee has a great passion for writing and publishing articles on diverse topics from Sister Nivedita to Satyajit Ray and has a liking for English poems, photography and travelling. His works have appeared in Muse India, Borderless and Briefly Zine.

Soumitree Gupta is an Associate Professor of English at Carroll College in Montana. She received her doctorate from Syracuse University, USA. Her research and teaching focus on global literatures and cinema at the intersections of postcolonial studies, diaspora studies, transnational feminism, and trauma and memory studies.

Dr. Suneel Mehmi, who lives in London, has publications in the fields of Film Studies, Critical Race Theory, and Law and Literature. His current projects include a book length study of how the law is modelled on madness in English fiction, an analysis of racist stereotypes of Indian men in Marvel’s Eternals (2021) and how these relate to the idea of legal/sexual judgement, and a study of how a patriarchal and white supremacist law structures contemporary American film by silencing Critical Race Theorists and feminists.

Tracy Jose is an Assistant Professor in the Department of English at Stella Maris College, Chennai, India. Her areas of interest are film studies, food history and food literature, popular culture, and children’s literature.

Dr. Yamini Sargotra teaches English at Dyal Singh College (M), University of Delhi. She completed her doctoral research from the Department of English, University of Delhi. Her doctoral project analyses the significance of political Hindi novels (1940s-1970s) in the Indian postcolonial context. Her areas of interest include Indian literatures, theories of Nationalism, Postcolonial literatures and theory, Gender studies and Translation studies.

Gayatri Aich is pursuing her Master’s degree in Comparative Literature at Jadavpur University. Her research interests include Performance Studies, Gender and Sexuality, and Indigenous Studies. She has performed dance recitals in national and international seminars. She is a dancer and is interested in understanding the overlaps between the performing arts and the everyday.

Joy Chakraborty is an undergraduate student of the Department of Comparative Literature, Jadavpur University. His areas of interest include Filmmaking, Indigenous Literature, Queer Studies and Performing Arts. He was the screenwriter and assistant director in the film “The Holy Immersion”, which was screened at The Lift-Off Sessions 2021 in UK, 11th Dadasaheb Phalke International Film Festival, and 4th South Asian Short Film Festival.

Priyam Sinha is a Doctoral Candidate at the Department of South Asian Studies, National University of Singapore. She holds a Master’s degree in Women’s Studies from Tata Institute of Social Sciences (TISS), India and a Bachelor’s in Sociology from Lady Shri Ram College (LSR), University of Delhi. Her doctoral thesis foregrounds media portrayal, notions of stardom in contemporary Bollywood, questions pertinent to women’s entry in Indian cinemas, semantics and intersectionality of disability and sexuality in cinematic representations. As a sociologist, she foresees the role of media, culture and politics that shape marginality displayed on the screen and maps them within Media and Culture Studies, Sociology, Film Studies, Disability, Gender and Sexuality Studies. Her articles have been published in The Economic and Political Weekly, The Routledge Handbook of Exclusion, Inequality and Stigma in India and The Journal of Indian and Asian Studies.

R Rohit is currently pursuing his Masters in Journalism and Mass Communication at The English and Foreign Languages University, Hyderabad, India. He has finished his Bachelor’s in English, Journalism and Psychology from St Joseph’s College (Autonomous), Bengaluru. His interests lie in politics, cinema, journalism and literature from the South Asian region.

Dr. Rituparna Das is presently working a faculty member in the Department of English in Techno India University, India. She has completed her PhD in Film and Fiction and Indian Diaspora studies from Calcutta University, India, in 2013 and have published several articles and chapters on different aspects of cultural studies in various national and international journals and books. She has been invited to deliver lectures and workshops in various universities including University of Graz, Austria, Cambridge University, and Montreal University. Her core areas of research include Cultural studies, Indian Dance and literature, Indian English literature, Indian Diaspora studies, Indian immigrant culture and cross cultural existence, film and media studies.