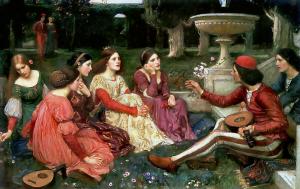 The history of human civilization is replete with instances of battle against outbreak of killer diseases, mostly belonging to the types of Bubonic plague, cholera, smallpox, and flu of varied intensity. Because of their contagious nature, they are able to wreak havoc among the entire population across continents. In the medieval period (between the fifth and fifteenth century AD), medical science was in its infancy and there was hardly any treatment for pathogen borne diseases (like bacterial, viral, protozoan). In the absence of any specific treatment, isolation and quarantine seemed to be the only way to deal with the catastrophe. The transportation system between the continents was not that smooth as we see today, which was a blessing as that helped to confine the spread of the disease into an endemic state. An outbreak of the contagion does not take much time in modern times to assume the proportion of a pandemic, because of the ease of travel. The spread of COVID-19 like a forest fire testifies to this fact.

Needless to say, diseases of such intensity and proportion are bound to have a profound impact on the socio-economic fabric of a region and on the mental health of individuals. Spending long hours at home may serve as impetus for many to resort to writing or practising various art forms. Epidemics and pandemics have found prominent places in the writing of the authors, both unsung as well as more illustrious and reputed across the globe. That the authors and poets are sensitized by the outbreak of a contagion is best reflected in a host of works from the medieval period till recent times. These books have great historical significance, not to speak of their literary value. These literary creations help to pave the way for mingling history with science, redefine the tale of scientific achievement and act as authentic documentary evidence for future generations.

Among the different causal agents, the Bubonic Plague (caused by the bacterium Yersinia pestis) is found to be the most lethal in causing widespread human mortality and is reported to be responsible for three major pandemics in human history: the First Pandemic was the Justinian Plague (sixth to eighth centuries), the Second, that spanned for an extended period from the fourteenth to the nineteenth century was a series of plague epidemics beginning with the infamous ‘Black Death’ (1347 to 1351 AD) and the third one hit in the nineteenth century. First appearing in Egypt, the Justinian Plague spread through Palestine to reach the Mediterranean and subdued the plan of the Emperor Justinian to bring the Roman Empire back, leading to a massive economic turmoil. The Black Death, the most devastating till that time, possibly originated in China and moved westward along the trade routes when ships carrying the sufferers docked at the Sicilian port of Messina. In the past, the Bubonic Plague was believed to have cause the pandemic. However, scientists now believe that a catastrophe may involve more than one pathogen, the most virulent of which might be a virus. The third Plague pandemic originated in the Yunnan region of southwest China, and then spread to other countries including India and Hong Kong through ships (Barbara Bramanti et al. 2019).

Plague came haunting and ravaging London, time and again, during the sixteenth and seventeenth centuries. The London Plague in 1563 and The Great Plague of London in 1665 happened to be the two worst episodes after the Black Death of 1348, for which the city lost a substantial percentage of its population. Apart from these, several cases of epidemics caused by Plague have been recorded, including the Plague of Athens way back in 430 BC, the Antonine Plague (165 AD), also known as Plague of Galen (after the physician Galen, who described the disease), the Plague of Cyprian, which erupted in Ethiopia and then reached Rome and other European countries (249 to 262 AD), causing acute shortage of manpower for farming and the Roman army. Although ‘Plague’ has been the term used to describe these epidemics, the causative agents are speculative and may be of viral origin.

The deadliest flu pandemic, which has gone down in history as the Spanish Flu, infected about one-third of the human population and claimed around 50 million precious lives. The avian-borne flu caused by H1N1 virus, was first observed in a military base in Kansas in the USA and then spread to other countries. The news of the flu was first published in Madrid in late May 1918, as the wartime censorship was imposed by the European superpowers like Britain, France, Germany, from where the nickname found its popularity. Scientists are still doubtful about its origin. Isolation, maintaining physical distance and covering face with the mask were the remedy to ward off the disease. Other major pandemics in recent times have been caused by the Asian flu (1957), the HIV (AIDS) in the 1980s, the SARS virus in 2003 and the on-going COVID-19 due to a novel coronavirus.

From Geoffrey Chaucer to William Shakespeare, from Sir Isaac Newton to Sarat Chandra Chattopadhyay, the life and works of these writers are found to be influenced by pandemics. Black Death figures in the work of Geoffrey Chaucer (The Canterbury Tales), Boccaccio (The Decameron) and William Langland (Piers Plowman). It is, however, interesting to note that Chaucer’s vast corpus of poetry contains few explicit references to the prevalent sickness and social turbulence of his day. Although the ‘Great Pestilence’ (fourteenth century people often called the Black Death by this name) figures minimally in his poetry, Chaucer appears to be philosophical in describing his views on death in two plague texts – The Book of the Duchess, and “The Pardoner’s Tale” (from The Canterbury Tales). The Book of the Duchess, a moving elegy, shows that the crisis does not spare any social class. Chaucer’s portrayal of plague in “The Pardoner’s Tale” was supposed to be inspired by Boccaccio, although England was repeatedly hit by plague in the fourteenth century.

William Langland’s Piers Plowman, an un-rhymed, allegorical narrative poem, considers sickness as an apt judgement against sin through the random mortality brought about by Black Death. The last episode of this satirical poem narrates the social and spiritual effects of pestilence and exposes the hidden danger of pandemic that defies the boundary of time. The Decameron, written by Giovanni Boccaccio just after the wave of Black Death, tells the story of a group of young people who flee the plague-ravaged city for the Tuscan countryside, where they bide the time telling 100 short stories over the course of their pastoral retreat (Millicent Marcus, 2020).

William Shakespeare also had a tryst with destiny when he was only three months old. The Great London Plague reached Stratford-upon-Avon on July 11, 1564, which lost 20% of its population. Shakespeare’s house was untouched, his life was spared – an act of divinity that rules the human existence. The playwright was indifferent to plague and only referred to the epidemic as a metaphorical expression of rage and disgust in a few of his plays – Macbeth, Romeo and Juliet, King Lear (Stephen Greenblatt, 2020). The plague influences the course of events in Romeo and Juliet. His contemporary, Thomas Nashe was deeply involved in the dance of death and gave an eloquent description in “A Litany in Time of Plague”:

Rich men, trust not in wealth
Gold cannot buy you wealth;
Physic himself must fade.
All things to end are made,
The plague full swift goes by;
I am sick, I must die.
Lord, have mercy on us!

During the summer of 1665, Isaac Newton, in his early twenties, moved to his family farm of Woolsthorpe Manor, some sixty miles northwest of Cambridge in order to escape the plague that was ravaging London. Woolsthorpe provided the sort of serene environment that allowed the mind of Newton to begin his journey to the world of unhindered imagination. Newton was found to remember in his later life that intellectually most productive and intense period of his whole life: “For in those days I was in the prime of my age for invention & minded Mathematics and Philosophy more than at any time since.” This period (between the summer of 1665 and the spring of 1667) is now known as Annus Mirabilis, or the “Year of Wonders” (Patricia Fara, 2018).

The Bengali writer Sarat Chandra Chattopadhyay made explicit references to plague and other epidemics in many of his novels like Srikanta, Grihodaho, Pallisamaj and other short stories. The central characters in these novels are described as altruists, who could risk their own lives to take up the rescue act in pandemic-afflicted villages. Epidemics feature in Rabindranath Tagore’s Chaturanga (1916), in which an affluent man turned his home into an infirmary for the poor when Calcutta was scourged by plague and eventually succumbed to the disease while attending to the patients.

In The Eyes of Darkness (1981), a suspense thriller, American author Dean Koontz writes about a virus developed in the Chinese military lab located in Wuhan. Albert Camus, the French Noble laureate, narrates a gripping tale of survival and resilience in his novel The Plague. The plague epidemic broke out in the Algerian city of Oran as thousands of rats began to die in the streets. Responding to the public pressure, the authorities ordered for collection and cremation of the rats, a process that acted as a catalyst for the spread of the Bubonic Plague. The Stand (1978), a fantasy novel by the American author Stephen King, also depicts a pandemic caused by a weaponized strain of influenza that kills almost the entire world, leaving a few survivors. In addition to these novels, “Pale Horse, Pale Rider” (1939) based on the 1918 flu pandemic, revolves around the romantic tale of two doomed lovers caught up in the throes of war and a deadly virus. Another book having almost the similar title Pale Rider: The Spanish Flu, 1918 – How It Changed The World by Laura Spinney also speaks of death due to an apocalypse of a biblical scale, of a vengeful god and of a plague in form (J. Russell Teagarden, 2018).

The harsh reality of living through a pandemic as depicted in literature teaches us how we can stand firm and face challenges posed by the raging pandemic. Although we are better equipped with medical facilities to tackle the disease, the present scenario appears more complicated due to a huge population burden and frequent visits to other countries. The social, economic, and mental instability during a pandemic remains the same as we see in the greatest of literary works. As Millicent Marcus (2020) rightly points out, “I have been reading, teaching, and writing about the Decameron ever since graduate school. But it had never held up a mirror to my own life experience until now. … Although the Black Death was much more deadly than the coronavirus has so far been, I began to see uncanny parallels between our time and Boccaccio’s – rhetorical and thematic emphases in our time that contained unmistakable echoes of Boccaccio’s work.”

Marcus, Milicent. “Pandemic Files: Reading the Decameron through the Lens of Covid-19: The fallacy of “literary distancing”.” The Yale Review: Pandemic Files, 2020. https://yalereview.yale.edu/reading-decameron-through-lens-covid-19. Accessed on 20 January, 2021.

Greenblatt, Stephen. “What Shakespeare Actually Wrote About The Plague.” The New Yorker, May 7, 2020. https://www.newyorker.com/culture/cultural-comment/what-shakespeare-actually-wrote-about-the-plague. Accessed on 15 January, 2021.

Bio:
A teacher and a researcher, Dr. Sambhu Nath Banerjee has a passion for travelling, photography and poetry. A Guest faculty at the University of Calcutta and RCCIIT, Dr. Banerjee has captured the famous Jagadhratri Puja for five years consecutively and is now working on a book on it. He has authored a volume of bilingual poems, Ek Mutho Roddur.