Poem: A Searing Jeremiad on Water Scarcity from Zehra Nigah 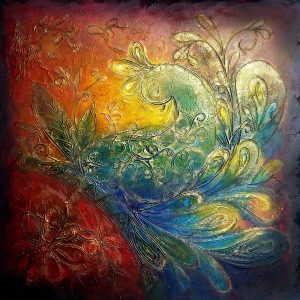 The mother taking the child in her lap
Put kohl in his eyes
Tied black thread in his hand
Then said, now come my moon
Let’s go see the peacock dance soon
The child laughed a lot watching the peacock dance
As if in those large eyes
Filling all the peacock’s colours
The light beating of the awakened tiny soft palm
Broke the swaying jungle’s calm.

Mother told me
The peahen is your sister, son
The peacock her husband
Your relation with the peacock is very old
You too must fulfill it
Do not forget
A poisonous storm arrived
The peacock and peahen both died
All the colours of the wings shrunk becoming dusty
The taut proud necks first bent
And then tipping down they went
Hung among the dried branches.

The child lying in the mother’s lap
Pining for water and every food scrap
Died too like the peacock
Left the black string, the wrist dried
The taut neck too tipping down to a side
The soft palm like a bud became barren.

Empty jungle
Empty lap
Empty branches
Empty swing
All the colours of the jungle scattered
All the mother’s children dead, not that it mattered.

Bio:
Raza Naeem is a Pakistani social scientist, book critic, and an award-winning translator and dramatic reader currently based in Lahore. He has been trained in Political Economy from the University of Leeds in UK, and in Middle Eastern History and Anthropology from the University of Arkansas at Fayetteville, US. He is presently working on translations of the selected work of Sibte Hasan, Ahmad Nadeem Qasmi and Abdullah Hussein, and contributes regularly to Newsline, The News on Sunday and The Friday Times. He has curated and moderated a first-ever edition of Banned Books Week in Pakistan in Lahore in September 2014 and successive editions since then, in collaboration with Olomopolo. He is the recipient of a prestigious 2013-2014 Charles Wallace Trust Fellowship in the UK for his translation and interpretive work on Saadat Hasan Manto’s essays. He is currently the President of the Progressive Writers Association in Lahore. His most recent work is a contribution to the edited volume Jallianwala Bagh: Literary Responses in Prose & Poetry (Niyogi Books, India, 2019). He can be reached at: razanaeem@hotmail.com

Tags: Climate Change, Environment, Poetry
From: Issue 1/ Beyond Mumbai, 2012
← Content: Poetics and politics of the ‘everyday’: Engaging with India’s northeast (Issue 53)
Three Poems by Sukla Singha →
No comments yet