Queering the Everyday: North East India and its Queer experiences 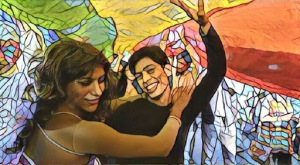 In her TED Talk, Chimamanda Ngozi Adichie talks about the “Danger of a Single Story”, that is how certain stereotypes about people and places are produced and re-produced, robbing the people of their history and their dignity. This problem of stereotypical definition is a chronic case whenever there is an existence of a periphery/mainstream binary. The North Eastern Region of India has always existed in the periphery of the imagination of the people from the mainland both because of its geographical location and also because of the cultural and historical reason. The various insurgency problems of the region have created an impression upon the mind of the people with regards to the NER as being a problematic land mired in violence and terror.

While it is true that for the most part from 1950-90s the NER was a land beset with the problem of terror and violence, this is just one of the many stories that shapes the wholeness of the NER. The region itself is not a continuum of homogeneity; it is the most heterogeneous region in India. Different tribes and sub-tribes forming different cultures and experiences came to make up the reality of the NER which is not a fixed, constructed, and singular reality. It is a spatially and contextually varied reality. Against this backdrop, the literature of the region reflects not only the problem of terrorism but also various facets of the everyday, in all its mundaneness, its bleakness, its simplicity, its complexities and its inexplicability.

The politics and poetics of everyday then is a way of making sense of the predicament without pigeonholing the same within the various binaries that come to define many of the state discourses. The everyday is an attempt to make sense of the life of the people living in the “real” world as experienced by the subject position in its everyday life. As such, understanding the everyday is primary in understanding the multitudinality and multidimensionality of the life as lived, felt, and experienced. Portraying such life requires moving away from the dominant discourses which has come to occupy the imagination of the people. As the oral tradition informs many of the writings and literature from the region, the literature of the North East India (if there is such a thing) is a blend of many strands – from the mystical to the realistic. One important aspect of the writing from North East is their rootedness in their time. Writers such as Chandrakanta Mura Singh, Robin Singh Ngangom, Kynpham Singh Nongkynrih, Mitra Phukan, Mamang Dai, Desmond Kharmawphlang, Temsula Ao, and others have tried to make sense of the situation and the context of the time and place which they occupy. Social realism is a very distinct feature of their writing. The social commentary and criticism of their writing allows the reader(s) to make sense and to paint a larger picture of the lived reality of the North-Eastern Region of India.

Against these developments, the lack of queer writing and the problem of queer  everyday is stark in the writing of North East India. The way Toni Morrison comments about the absence of African-Americans in the historiography and literary imagination of the US, the presence of queer in the writing of North East India is characterised by their absence. The politics of sexuality seems to be relegated to the background. However, queer sexuality is an important postmodern discourse which is immanent in understanding the “logic of late capitalism” which Jameson has theorised. Queer writings from the North East seem to exist within the digital space. One such space is ‘The Chinky Homo Project’ which is described as “a digital and print anthology of queer writing from North East.” Both the terms “chinky” and “Homo” are slurs, the former being used by the people from the mainland India to describe people from the North East India. The term chinky is connotative of someone from Chinese or East Asian descent. As such it confers an “outsider” status to the people from the North East because of their looks and geographical location. The other term “Homo” is also a slur. The reclamation of these two slurs by this site is an important technique of subversion whereby derogatory terms are being co-opted and used as a tool of empowerment. The project name is in itself an attempt to encapsulate the everyday experience of queer people in the North East India. Rummaging through the texts and hypertext of the digital “anthology” one can encounter the panoramic portrait of the everyday experiences of the queer people of the region.

The digital world allows for the existence of a counter-space whereby marginalised discourses and experiences are shared. The publication and sharing of the everyday becomes easier, convenient and accessible. The everyday is not subjected to fossilized scripting within the pages; rather it is transcribed and updated on a daily basis with an extensive cross-referencing system (hypertext) embedded within the text. This fluidity of textual update enables a regular dissemination of knowledge to the outer world. The poetics of digital queer writing lies not in interpretation, re-interpretation and over-interpretation of the text but in the dynamic nature of the text, in its structural conception, whereby the text is not final but can be updated, changed, deleted or hid, within a fraction of time. The text then becomes a simulation of reality, whereby it informs and forms the readers’ sense of the world.

Queer experience, in most cases, is always besets by marginalization. Queer experience in North-East India is no different. The everyday for them is a struggle to fit in or to be “fitted out”. One transwoman Dona Marven, in her piece “A Transwoman’s Hard-hitting Life Journey in Shillong’, talks about her being bullied every day for being a boy who defies masculinity. She writes, “…students started bullying me, calling me out for neither being a real girl or a boy but a ‘fake woman’ or ‘second hand’.” Queer people are always made fun of for not conforming to the strict gender roles of society. Their everyday is a story of constant degradation, denigration, abuse and many a times, mauling and death. Marven is threatened by men with death for behaving like “a woman”. Writing the everyday, for them, is a difficult task of trying to give shape and face to the facelessness of threat and conflict that they face. What is unfortunate is that such queer experiences are outside the purview of mainstream view. Debates regarding tribal rights, gender roles, minority rights, language rights, terrorism and insurgencies, etc. have come to occupy much of the discourse, academic or otherwise, of the North Eastern region. However, the discourse on sexuality and the everyday of the queer people is almost non-existent.

Focusing on the tragic aspect of their everyday is a disservice to the queer people and also to the actuality of their complex existence. Queer experience is not homogenous, fixed and one-dimensional. Their everyday life is also redolent with acts of falling in love, first heartbreak, and most importantly the ability to accept who they are when it comes to their sexuality. An anonymous contributor from Assam talks about her life in an All Girl’s school and her first love. In “Being Gay and Self-acceptance in a Christian State like Nagaland”, Iohborlang Kevin Hansen focuses on his self-acceptance and his journey in finding true love. These experiences are much more important and significant in understanding the reality of queer people and also in expelling the paradox of “a single story”. There can never be a single queer experience and understanding individual experience and the context in which the individual exists and speaks is productive in reproducing the cumulative and collective queer experience.

One important journey of queer experience is their self-acceptance. The ability to embrace the queer authentic self is an important aspect of their journey. All the writings the ‘The Chinky Homo Project’ contain this element of self-acceptance. This acceptance, however, is the result of a long journey of everyday experience. The daily struggle and the experience allows the queer people to reach the conclusion that in order to be loved, they must love themselves first, echoing Oscar Wilde’s immortal line, “To love oneself is the beginning of a life-long romance…”

This conclusion is the result of many years of existing within the periphery or trying to cope and conform to the gender norms. As such their everyday enables them to reach this final conclusion that they will have to be the one who would love themselves first and foremost. The everyday of queer people then is a long journey of a grand preparation of that final stage of acceptance. Queer existence precedes essence; or in other words, queer people first came to exist as individuals devoid of identity. As they struggle through their lives, they come to a point where they could make sense of their essence.

Queering the everyday is an attempt to see and read the everyday through the eyes of queer people. Their everyday is a farrago of conflict and the mundane. It is an adventure full of threats being received, forbidden love being made, forbidden kisses being shared, forbidden thought that crossed their minds, and all the baseness and smallness of life. But this everyday life is significant enough in understanding queer experience. The politics of the everyday focuses on the way in which queer people navigate the problem of their life. Some like Marven search for a community and find one which results in activism of different vibrant colours. Some move out of the closet and into the anonymity of the city life. However, these are made possible by that one realisation that their everyday is in fact a dress rehearsal for their ultimate acceptance of who they are, and it plays a prominent role in shaping their resolve, their poetics and their politics.

Bio:
Lede E Miki Pohshna is a PhD research scholar in the Department of English, North Eastern Hill university. His research interest is on Queer writings in general and South Asian Queer Fiction in particular. He enjoys writings that try to understand the human predicament and its darker side. He writes poems, short stories and is trying to complete a novel. Currently he divides his time between Shillong and Sohkha Mission, his native village.