An excerpt from a forthcoming novel, ‘Funeral Nights’ 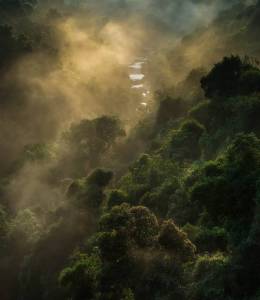 The Miraculous Prayers of Liaw

Liaw was a little fellow from the Shillong locality of Mawkhar. Nobody knew his real name or why he was called Liaw, which is another of those meaningless Khasi nicknames. Some people said it was because he was so small – about four feet eleven – though nobody could be sure.

Liaw was only a daily-wage labourer but was well-known throughout the locality because of his excessive fondness for praying before mealtimes, especially whenever there was a big audience. However, he was not a religious person in the conventional sense and did not even go to church. But at funerals and feasts, when you happened to eat together with him, you had to listen to his loud prayers first. Thankfully, though, his prayers were quite unique, and not very long, because they directly addressed the issues at hand, the things he could see or could not see on the plate.

For instance, once during a naming ceremony, he and his friends were given a dish of rice and a beautifully prepared beef curry. For dessert, they were given a plate of gulab jamuns, which, as you know, are dark brown sweets, the size and shape of golf balls, or slightly smaller. Looking at the food before him, Liaw began his prayer by saying, ‘O Lord, thank you for this plate of rice; thank you for this tasty-looking beef curry; and certainly, thank you for these liang kulai [horse testicles] that I so love to eat. Amen.’

At another feast, Liaw was given a plate of rice and pork curry. But by an oversight, he was served only the gravy, pieces of potatoes and some bay leaves used to flavour the curry. There was not a single piece of meat on his plate, whereas, on his friends’, there were four or five pieces. When Liaw said his prayer, therefore, he began with a loud appeal: ‘O Lord! I thank you for this plate of rice and I appeal to you to bless our generous hosts for it, but at the same time, as you turned water into wine, I also fervently pray that you kindly turn these bay leaves on my plate into pork!’

Hearing that, the red-faced hosts quickly produced a separate plate full of pork for Liaw. And Liaw said, ‘Prayers can work miracles.’

Once a friend of Liaw called Knung – because he was so tall and thin – came running to his house in the middle of the night. Knung had recently married the youngest daughter of a wealthy family after lengthy consultations with Liaw and his cronies, whose plan was to make Knung very rich, for as per the Khasi custom, she would inherit everything. The union, they hoped, would bring them great benefits as well. But unfortunately for Knung, his mother-in-law became pregnant again after a gap of many years. The man was in a tizzy. ‘What to do, what to do?’ he said to himself. Not knowing what to do, he went running to Liaw’s at the dead of night.

When Liaw opened the door, Knung said without preamble, ‘Golmaal, bhai sub golmaal! Trouble, big trouble! You have got to help me, man! Please, man, please!’

‘What happened? Why are you crying?’ Liaw demanded in a stern voice.

‘What else can I do? My mother-in-law, man, she’s pregnant! Can you believe it? Pregnant at her age! It’s shameful, man! But what if she gives birth to a girl? She’ll be the youngest daughter, no? Short of murder, what can I do?’

Liaw told him to get a grip on himself. He rubbed the stubble on his chin and asked, ‘When is she due?’

‘She just learned about it.’

‘Then maybe it’s not too late. Don’t despair. We’ll organise prayer meetings every day, after all, prayers can move mountains, no?’

Liaw and his friends met at Knung’s every day after work and prayed for almost nine months, demanding from God that Knung’s mother-in-law must on no account be blessed with a daughter. During these prayer meetings, they abstained from drinking and only indulged themselves when the prayers were done, and that too, not too much, just a glass or two, to wash off the cement dust from the construction site. And believe it or not, after nine months, Knung’s mother-in-law gave birth to a baby boy. Liaw’s fame as a praying man rose phenomenally among his friends.

Liaw’s friends were also never tired of telling a story about what happened to him once during a prayer. They were all sitting together at a building site, their jasong lunches, packed in betel nut leaves, spread on the ground before them. As always, Liaw did not allow them to eat without praying. He closed his eyes and began to pray, but perhaps because he was more hungry than usual, he opened his eyes at the time when he was about to say ‘Amen’. And when he did that, he saw a little chicken shit just in front of his jasong. The sight so muddled his thinking that instead of saying ‘Amen’, he said, ‘Ah, i eit!’ (‘Ah, shit!’).

Only once did Liaw refused to pray. That was during the funeral of a close relative in a Sohra locality. Liaw had gone there with his usual band of friends, and because they were all daily wage earners by profession, they were thought to be the fittest people to dig the grave. As a result, the whole morning, till about noon, they were made to work non-stop at the graveyard, digging and generally preparing everything for the burial. When it was done, they sated their thirst with a few drinks. But tired and hungry, for they had not eaten anything for hours, they decided to return home and not to wait for the food that was supposed to be brought to the graveyard. On arriving, they immediately headed for the kitchen. The woman helping at the kitchen ladled rice and pork broth onto their plates. But in Sohra, people were used to slicing their rice very thin, like slicing a piece of cake. Thus it was that the woman gave them thin slices of rice and a piece of pork each. When she had done that, she said in a friendly tone, ‘Okay, Bah Liaw, now you can begin your prayer.’

Tired and hungry, Liaw looked sourly at the small helping of rice and the single piece of pork on his plate. Suddenly he lost his cool and shouted, ‘Pray!? Pray for this measly rice and this tiny piece of pork! You pray, you miserly woman!’

The woman fled the room in shame and was replaced by another who immediately ladled up more rice and more pork onto their plates. Seeing that, one of Liaw’s friends said, ‘Hey, Liaw, even refusing to pray can also work miracles, huh?’

Liaw had been staring fixedly at the food in front of him as if trying to make sense of what had just happened. His friend’s comment, however, broke the spell. Giving a low grunt, he said, ‘Let us pray.’

It was the shortest and most cryptic of all his prayers. He simply said, ‘O Lord, for this miracle too, we thank you. Amen.’