Strange Fruit: Or, to be Dalit, and Eat 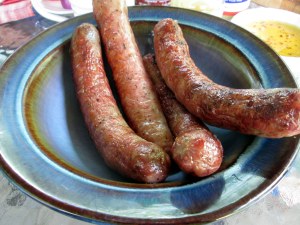 “[T]ender pork cooked only with water, salt and black pepper; chicken cooked only in beer; and mutton cooked only in rum…Vegetarian food was also to be cooked, but again in Dalit style.” – Chandra Bhan Prasad, Dalit Diary

Today, the Dalit culinaire faces a curious paradox. On the one hand, she feels like she has to discard practices from a past life. On the other hand, the alternative often means the pressure to gentrify her taste-buds to suit an order of things that she feels is out of place. All her life she has had to negotiate with this double-edge, hiding her own culinary identity as she navigates the new-found urban-public spaces, often, at a great cost.

On the one hand, she must fit in, assume a screen upon her tongue, consume what they have established in their local markets, in their restaurants, in their cafeterias, in their occasionally magnanimous offers to share a meal with her. She must not let her lunchbox or kitchen smell too pungent, lest the neighbors complain, and the difficult act of landing a rented house in a decent neighborhood slips away from her. She must buy their over-glorified blends of ten thousand different spices which end up tasting like none of them, but perhaps most closely resemble powdered chalk, to cook her meat. She must cook her meat until it loses its own flavour and becomes thoroughly doused with the taste of that powdered chalk. Onions have been for her an integral ingredient that stood by itself; as its own curry; roasted in the fire; preserved, fermented, and pickled to be an accompaniment for days when there is nothing else to go with the starch. She can, at the back of her head, think of an entire fine-dining menu established to celebrate the Onion. In an elsewhere world, an alternate reality, she would be such a chef, in a posh restaurant, and serve an entree titled, “Seven Textures of an Onion.” But she must now use it only as a base for her curries, copious amounts too, to make her chalk-flavored gravy thick. She must now use ginger.

On the other hand, she recognizes that this civilisational project has its clear and obvious fault-lines. That its structure crumbles upon itself when she realizes that the very they who pin her down to this vision of civilization have a very different vision that they actually aspire to, that of the global elites. She recognizes the dramatic and perverse irony of the undeniable thesis that grows inside her head, that her food is the obscure culinary object of the elite’s desire. Everything she is made to sacrifice, forced to forget so that she could belong, is precisely what is seen on a global stage as a prized culinary artifact. The world she now occupies is populated with images, phrases, and objects that seek to luxuriate with what was essentially her daily grub, the food of her home.

She chances upon an article in the Sunday supplement of an English daily, which carries an interview of a French-trained Savarna chef, who zealously propounds the merits of nose-to-tail eating. She chuckles, of course. But to her immediate outer world she could never reveal that her people, either out of scarcity or innovation, were the original proponents of the same in this land. That they have, since forever, experted how to roast the snouts and the ears and the cockscombs and the intestines; and to fry the skins and make cracklings which will be had as snacks on a rainy day; to make the collagen taste as good as meat itself; to boil and spice blood and make cakes out of it, or add it into the pot and create a stew that tastes like velvet. She is confounded by first world-chefs who (now?) seem interested in how the organy flavour of the innards renders a unique complexity to a dish and how it is a good thing. If she were to be a second generation immigrant in the city, her parents would probably tell their upper-caste neighbours that they are making chicken/ mutton for their kids. But there was a conceit, was there not? What she grew up on was in fact a steady diet of organs, bought for a pittance compared to what the actual meat would have cost. This act of masquerading these organs within the broader term for the meat was, for her parents, an act of simultaneous pride and shame. Their children ate well, they belonged to a well-fed household: this is the secret image which they tried to maintain, and the ingrained casteism of the neighbours, more often than not, let this conceit linger unexamined. And now, suddenly, she is made aware that her secret organ diet, which still fills the Savarna with disgust, is seen in global culinary establishment as elevated flavor.

If she were to belong to inland Maharashtra (or even swathes of the broader “Hindi Belt”; but let’s not talk about that), chances are she grew up knowing margarine before she knew any other cooking oil. She nods in agreement when a chef on a YouTube video fries things with beef drippings for an additional depth of flavor. She understands exactly, when “dry aged meat” is described by food writers abroad as “earthy” or “fruity,” having experienced versions of such “putrefied” meat (as the Savarnas would call it) as part of her cuisine, herself.

She feels amused when she listens to chefs from noma and other “Best Restaurants in the World” consistently emphasize on the laborious process of foraging – which, no doubt, she is familiar with – as being crucial to the respective construction of their seasonal menus. In lieu of being Dalit, and not having had enough land to engage in profitable farming, there have been tiny quantities of seeds which have passed down her generations, to grow meager quantities of vegetables and fruits in the small corner of land beside her ancestral village settlement. She realizes that this produce, which tastes or looks nothing like what one gets in the market, is referred to in the higher echelons of the culinary world as “heirloom.” In a life that has been lived with the anxiety of being fundamentally devoid of what is conventionally seen as heirlooms, she tries to seek solace in a handful of seeds that were once owned.

If she were to belong to pockets of Western Odisha, she grew up with cured fish roe being shaved on her rice gruel to give it an exceptional flavor; the very same cured fish roe she finds now in an Italian fine-dining menu, as Bottarga. She finds that, in Italy, this preparation is given a special status. The government places it in a unique category, “Traditional Food Product,” and that this status elevates it to a prized good, often fetching exceptional prices and providing its producers with a model of abundant sustainability. The idea that the government in this country, the very same that has notoriously been built upon a systematic exclusion of small-scale farmers and food producers since the day it was founded, could perhaps one day facilitate something similar makes her laugh aloud.

And besides, who would do the task of bringing each and every such ingredient to the fore, who would compile an anthology of “Traditional Food Products” that her people make? The Savarnas will never stoop to the level of actually doing the hard work, or celebrating these ingredients in their posh restaurants. The very idea of Dalit food being served to them would turn away all their patrons. The unprofitability of the premise would be truly immense. And for people like her, the unprofitability lies in a radically different but far more fundamental axis. Her whole life, her entire socio-political being has been about trying to get out. The common axiomatic principle that she follows, the singular ethic that she lives by, is the wholehearted rejection of the very roots within that oppressed village ghetto which symbolizes a life of discrimination and humiliation. At the crossroads that she finds herself at, that gesture at a global relevance of her unique culinary identity, she cannot but ask herself whether an(y) act of owning her food, or even eating it, is in fact symptomatic of a betrayal to the principles she has lived by all her life. What will be its worth, what will it cost?

If our subject, the culinaire, was born from a Dalit ghetto at the edge of the Chilika Lake, she would have heard a fable from her grandfather, the fable of a strange fruit. The fruit whose name she conspicuously can’t remember, except that it started with a “tha“, possesses a taste which is absolutely incomparable to anything else that is edible in the whole world. It has no seeds, its flesh is pure surface; one bite of it, her grandfather must have told her, “makes your entire soul content”. It grows deep in the marshes, ahead of the swampland (where all the shit piles up), where the upper-caste man is ritually forbidden to go. Only her people know how to look for this rare fruit, he would have said. But you have to go alone. And yet, every time one would go in search of this fruit, they would encounter a difficult task, which would divert their attention, and ultimately reward them with a life-altering gift instead. This is how, her grandfather would have said, he managed to rescue a princess from a tiger, and got gifted the land that they live on. A distant uncle would have found a perfectly new cycle inside the swamp and rode it into a life in the city. She would grow up hearing so many such tales of her people searching for this strange fruit but getting a better life in return. The obvious metaphoric nature of the fable would not be lost on her now.

Yet, she feels, if there is, indeed, such a fruit, then it must represent the essence, the very soul of Dalit food. She hopes that one day it would be possible for her to look for it. That day, the act of going into the marshes and back into the shit-by-the-swamps will be rid of its oppressive and humiliating implications. That she will not have to fight against herself, against her baptism by the act of getting out, against what she represents, to go in search of this strange fruit. That day, she would not be burdened by the necessity of the diversion that she will encounter; unlike so many before her. That day, she will not be confronted with the difficult task of the fable, for no reward shall hold the promise of a better life for her. That day, she will have nothing to desire, except the procurement of this fruit itself.

Bio:
Rahee Punyashloka is a Dalit scholar who is currently a doctoral research fellow at the Centre for English Studies, School of Language, Literature, and Cultural Studies, Jawaharlal Nehru University, New Delhi. His undergoing PhD thesis is titled Anti-Novel: A Study. His research interests also include contemporary philosophy, image studies, and the works of Sigmund Freud, Jacques Derrida, and Jotirao Phule. He is also a filmmaker and video artist who processes analog techniques in digital. Some of his works have been screened at New Delhi, Athens, Jakarta, Rotterdam, and New York.