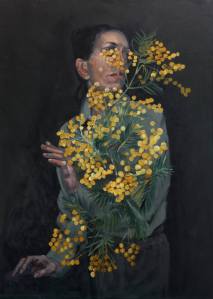 We’re done with tired old terms and the worn-out images they conjure: double burden, glass ceiling, domesticity, exposure, representation, erasure. But even as we occupy spaces, fill them with the music of our voices and the glitter of our ideas, new demons emerge, and old ones re-emerge in modern clothing. We have acquired a shiny new vocabulary that gives shape to old fears and arms us with phrases to sharpen our fight. Old enemies continue to attack and confine our bodies. New ones paint bright wings on our backs and harness us with invisible cords, aided by the market and a new politics that seeps into the very culture we seek to change.

Partha Chatterjee (1989) remarks that the Indian nationalists fashioned modernity such that even while women’s external worlds were changing with access to education guaranteed by law and ease of travel facilitated by urbanisation, their inner cultural and spiritual selves remained untouched and pure. The honor of this “new woman” was made visible through dress and demeanor, amongst other things. As many feminist scholars have argued (Phadke 2013, Thapan  2004 and Radhakrishnan 2009, among others), no matter how much the external conditions of life change, women must continue to make visible their honor in both appearance and behavior. The “good” Indian woman safeguards her honor by not loitering, not announcing her presence in a way that attracts [male] attention or disapproval, and adhering to other culture-prescribed norms.

While the label of “newness” takes on different meanings across communities and geographies, when applied to the urban, middle-class (itself a large, fluid and contested category) Indian woman, it reveals itself to be problematic. In this essay we seek to lay out how our lived experience contradicts and contains notions of newness.

One of us is older, and the other younger – a false binary that nevertheless has its uses. Our bodies, old and young, continue to be policed, and our voices, fresh or seasoned, continue to be moderated even when not silenced. We negotiate our gendered selves within an environment that prides itself on newness (mass transit, roads, the Internet, education, fashion – yes, fashion! – free co-mingling of the sexes, grudging acceptance of fluidity) – so what’s not to celebrate?

A group of women in Bengaluru stepped out to celebrate New Year’s eve. What happened next is what Indian girls and women have been asked not to risk – molestation. Politicians tend to repeat hackneyed phrases like “aping the west” and “boys will be boys” as possible excuses for sexual harassment. I don’t even flinch now. We have heard it for so long, it is the new normal. Funny, right? Women have been a part of both the formal and informal workforce for so long now, yet that doesn’t become the normal. Women’s proper place is still in the ghar. The judging stare of aunties and uncles, categorising young girls by dress and demeanor is normal, but women occupying public spaces is not. The Bengaluru incident spawned a protest movement organized by women’s collectives and organizations across India, ‘#IWillGoOut’, calling out misogyny and access to public spaces.

Ping! Something lights up my desk as I step out of my room. My phone! I cannot believe I almost forgot that all-important device, in case something were to happen on this adventure to reassert my right to public spaces. A notification on Facebook reads: “Please share your live location with a couple of people (just in case) and here on this page. Don’t forget to use #IWillGoOut”. I have that covered. No point being blatantly regardless of the danger that lurks, right? My safety is contingent on factors external to my dressing and attractiveness quotient. Ha! Who am I kidding? Theoretically, they shouldn’t. But as Susan Bordo (1999) says, one must take into account the “concrete contexts—social, political, cultural and practical—in which they are embedded.” The material contexts of my body and environment do not disappear in the layers of theory or the many folds of my chunni. My chunni, the measure of my ‘sanskar’ (culture), a piece of cloth, my friends and I would jokingly (not!) refer to as izzat – it could mean respect, it could mean honor – in this case we meant the responsibility of our honor, chastity, and purity, was on us, literally and metaphorically speaking. The discourse of nationalism is woven into our very clothes; it becomes a symbol of our culture; as long as it is on my person, I won’t be molested or raped.

Hyderabad is a lazy city, its pace slow and its people (mostly) relaxed. My home is just a shout away from the eatery-lined main road, and the lane outside my house has food delivery men parked all day. A sea of men. I have never had a bad experience, though. I have not been “eve-teased”, cat-called, or fat shamed. I ignore the stares. After all, “looking” is not wrong, “staring is not wrong”; being eve-teased gives you the right to shout; molestation, the right to slap, maybe; and rape? Well, rape must be avoided at all costs. But boys will be boys, men will be men. And the level of retaliation can be directly proportional to the hierarchy of crime.

But I have made up my mind to walk these lanes of my neighborhood, familiar but strange in the dim yellow street lights casting strange shadows. I tweet #IWillGoOut. I post it on my Facebook wall and feminist groups I belong to. More such posts start trickling in from across cities. A sense of accomplishment. A shared reality. There are more like me. Women (as Gayatri Spivak reassures us it is okay to use the category of ‘women’ for purposes of mobilization) from across contexts, productive bodies like domestic workers, or non-productive bodies seeking pleasure. Now, public spaces are being reclaimed, and I must be a part of that.

I lived the moment twice: first when I went out, and again, as I followed the media coverage – women with placards marching on to the streets, chanting feminist slogans ‘I will go out’, ‘Azadi’, ‘break the silence’, ‘take back the night’. I had only read about feminist protest marches in the 70s and 80s, and here I was, participating in one. But what were feminists protesting then? Dowry murders and rapes…not much seems to have changed. I am not surprised that there is a sense of solidarity across generations.

5:15 a.m. The alarm on my phone pings – that soft bell that ensures that no one else is disturbed. Except that my significant other has already risen and made the coffee and started the laundry.

I’ve got used to rising with the burden of guilt. Anything other than the half-darkness of early dawn is too late. Virtue is tangled up with early rising, completing one’s kitchen duties well before the sun gets ten degrees over the horizon. So that I have enough time to fit in a yoga class before I leave for work, no morning chore left undone.

8:45 a.m. I’ve packed the lunches and filled the water bottles, with five minutes left for a quick breakfast. Sitting down to chew each mouthful thirty times is out of the question, let alone relaxing over a second cup of coffee (the first taken standing over the stove).

11:00 a.m. In class. I take care to dress just right; conventional but not too. I take care to speak just right. Contemporary but with the right touch of awareness of and sensitivity to what has come before…me, my students, the institution within which I function. Society at large. I take care to relate. As a female teacher I am expected to care, counsel and also educate, although I often quip that students come to me for a sympathetic shoulder and to my male colleague for intellectual input.

12:30 p.m.: At the staff meeting, a colleague mansplains something I just said, helpfully adding with a smile, “If I were you, I would….” But he is not, and I would not. Yet, I remain quiet, looking down into my neat notebook and filing away a sliver of resentment.

1:30 p.m. At lunch with colleagues, I hear about another administrative appointment, another man. Apart from a fistful of deans and heads of departments, there are no women in senior administration at the University. Firmness is too often mislabeled as stubbornness, confidence misrecognized as arrogance. As with women who laugh too loudly in the Indian Parliament, those who make their point loud and clear in meetings meet with subtle disapproval, rendered unsuitable for office that gives authority – such as is exercised – over men.

5:00 p.m. I am anxious about beating traffic and getting home in time to slip into other roles, meeting other expectations. Even after all these years, I’m uneasy about being the first one to leave the office, even though I know I’m going to be back on my laptop later in the evening, even though I know I have a longer commute than most.

7:30 p.m. A casual remark about the taste of something at dinner makes me wonder if I should have paid more attention while cooking. A casual question about a child’s wellbeing makes me wonder if I should call more often or ask more probing questions. Am I involved and interested enough? Casual questions, but I refuse to lay down that burden of guilt I picked up in the morning.

10:30 p.m. I am at my laptop, willing myself to produce…words, ideas, arguments. The house is quiet with the silence of minds at work, reading, editing, rewriting, commenting. Output is everything. There has to be something to show for all those hours spent away from home, away from the duties of the hearth. There has to be something to show for the early departure from office. Something more than the average colleague, who is seen all day, whose voice is heard in the corridors and whose name is spoken of with awe by students.

The guilt that is so familiar to women of my generation is fed by old and new expectations. I am the keeper of tradition in the home, I am the mover of the daily machine that is family life. I am the sole feeder of my ambitions, such as they are, and I must face their consequences, consequences that the world throws back in my face as being of my own making.

Then who is this new Indian woman? Is she the intrepid conqueror of spaces, who stakes her claim to the streets, to the bahirs of the world, just as she asserts herself in the ghar? Or is she continually limited and shaped by the market and the state (Vijaykumar 2013), in ways that make her a reactive rather than creative being? Within the structure of family and society – even when the luxury of choice has been claimed – the responsibility for realizing newness, it seems, rests with the one who has claimed it. So even as a cellphone advertisement celebrates the wife who is her partner’s senior manager at work, it firmly puts her back in her place as the one who rushes home early to keep dinner ready for him. And even as a woman might win a seat in Parliament, she must speak softly, and avoid loud laughter – for, as Margaret Atwood famously said, “Men are afraid that women will laugh at them. And women are afraid that men will kill them.”[1]

So really, what is new?

Bios:
Usha Raman is a professor of communication and media studies at the University of Hyderabad. Her research and teaching interests include feminist media studies, digital culture, science and health communication, and children and media. She is also a columnist for The Hindu, and blogs at mayanotes.blogspot.com