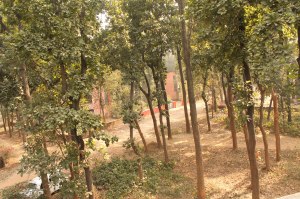 I associated a part of me with the word ‘flaneur’ much later in life, in my mid-twenties to be precise. An evolved and strong in vocabulary soul was trying to fit me in a box like people do over conversations in the warm, aesthetically pleasing glow of vintage table lamps in comfortable living rooms over hors d’oeuvre. I had nodded absentmindedly and reflected on how I have been walking aimlessly, observing all that is around me since I was nine! I just wish I knew exotic French phrases to combat adults who questioned and tut-tut-ed the curious girl and her aimless wandering nature, back then.

Mapping the flaneur: A collage of walking through three distinctly different Indian cities/towns

Kathak (a form of Indian classical dance) classes were held on Tuesdays and Fridays of every week, barring two months every year during summer and Pujo vacations. All I had to do was convince Ma that my presence was required thirty minutes earlier in the class. She knew the main reason, of course but thankfully she was one of those mothers, who let her child find what they want to, instead of mollycoddling them. Armed with the dance-class wala best friend (one so believed in these terminologies at the ripe age of eight/nine), the wandering feet would cross lush paddy fields, Sal forests, and cowsheds, where the Jersey or ‘phoren’ cows munched cattle feed nonchalantly as their swooshing tail swatted flies.

I learnt free hand tightrope walk as I balanced myself on the mud boundaries that separated paddy fields, sometimes these fields separated by mounds of earth belonged to brothers, sometimes to strangers. Mother earth gets divided. In fractions and more fractions, humans claim ownership of what will never be theirs.

There were well-maintained gardens one could enter climbing certain walls and meet The Selfish Giant in form of educated, taant saree draped aunties, who frowned rather vehemently at ‘gechobaccha’. The nameless birds chirped as our delicate feet hurried inside the Sal forests as dusk would set in. In the same mysterious forests, the seniors from schools hastily untwine the fingers that played first love games with someone of opposite gender, when we crossed paths, aware of a society that would rather have teenagers meet in secret than hang out publicly.

One recollects numerous scenes from these days. There was the friend of my Dadu (paternal grandfather) who would relish his jalebi, away from home at a certain spot trying to show the middle finger to his blood sugar levels. The fist fights that started over something as inconsequential as kite-flying, buffaloes that copulated on the edge of fields, the monkeys which once sneaked up three puppies on a well-to do banyan tree and dropped them while the mother dog howled. The innumerable sea shells which mysteriously appeared among a huge pile of sand at a field rather far from home, the long morning walks with parents which ended once we reached a bottle brush tree a certain distance away from home. And blood. There was always coagulated blood in one of the rustic paths I roamed in my quest for a new feather, a different shaped pebble, or anything new. Even as a pre-teen one understood acts that caused bloodshed must be undertaken in places with lesser footfalls.

Varanasi, one of the oldest continuously inhabited cities of India and the world, is for seekers of all kinds – whether Moksha, perfect Benarasi sarees for the wedding trousseau or good quality bhaang. Varanasi is a potent mix of the predictable and unpredictable just like life.

Varanasi has been romanticised, criticized, revered in literature, films, and other mediums. I have a different definition in my heart for it. Someone once referred to Bombay or Mumbai as a whore city, the city that repels and attracts one at the same time. Not to sound derogatory about a profession at all, Varanasi is the only place I hate-love-hate-love, a sort of loop in the mind.

The first time I landed in Varanasi, what struck me was how unclean it looked, followed by the unpleasant smell that hung over the entire city. It was all rather overwhelming, the politics of being a city in one of India’s infamous state, UP, the massive university, the student-cum-hostel life and taking the first steps towards living on your own, away from everything familiar for the first eighteen years of life – at a glance it was more than one could chew. But Varanasi grows on you as you walk the same lanes over and over again and yet remains different every time.

As a Bengali kid growing up on Feluda, Satyajit Ray’s fictional detective character, I tried retracing Feluda’s steps as I scouted Varanasi. Did I meet Maganlal Meghraj, one of the charachters in the book? Not really, but an array of characters stood out here. Sharmaji whose sweet shop was not the most popular but as one took a spoonful of Rabdi that he rustled up himself one felt closer to God than visiting the crowded Viswanath Gali. The blue-washed family lodge run by one Mishraji whose smile turned vacant as one asked him about his son, while the young widowed daughter-in-law played with her toddler in the courtyard. The unpretentious restaurant I had chanced upon as I walked towards Assi Ghat which served English tea in a breathtakingly delicate tea-set. The lingerie shop whose cutout models attracted attention from both the genders. The men who size you up were not at all concerned about their paan-stained teeth and uncomfortable stares. It made me realise how not to dress and how to merge with the background when one is born a certain gender in our society.

Then there is, of course, the Ganges. She flows relentless having accepted she will be worshipped but treated badly on an hourly basis, making it difficult for the waters to breathe. One could walk from one ghat to another, a soul lost in time, stand mesmerised as one watched the Ganga-aarti or inhale the smell of flesh turning to ash as one nears Manikarnika – the holiest of the ghats, where the soul from the dead finds moksha.

The feared Aghoris who on a good day allowed me to touch the first skull (I have only seen skeleton in Biology lab in school), the chillum-sharing Babas, the boys who dived down to collect coins and then giggled when we paid them extra for chocolates, the mist that hung over the winter season as you sat on the steps of the ghat sipping on Bhang, trying to decode life. Varansi is trance.

Delhi has multiple personalities. While walking on its roads, it can be who you want it to be.

As an art-addict, I have been lucky to have seen some great installations and paintings by talented artists as I moved around from one gallery to another. One could walk from IHC to Lodhi gardens, soaking in the winter sun on weekends. Or get off near Max Mueller Bhavan, walk towards Banga Bhavan and relish a much missed homely Bengali meal and then stop by at Agrasen (or Ugrasen) ki Baoli located on a narrow lane off Hailey Road. I would normally spend half an hour just sitting on the steps, flanked by thick walls goose bumps caressing the skin as I imagined the number of humans whose feet possibly touched the same spot.  Surrounded by high rises in an upmarket area, many did not know about this spot till an Aamir Khan film made it famous. This was one of the hidden gems Delhi offered to people like me, who could look beyond the flashiness and political power-play the capital of India is known for.

I have walked from one end of Chankyapuri to other, appreciating the modern architecture of the sparkling embassies and obsessively neat mansions, lined one after another on either side of the broad tree-lined road. This part of Delhi is terribly different from the crowded and always bustling Lajpat Nagar situated just 10 kms away. A mish-mash of houses and shops offering branded and international fashion trends at reduced prices, humans and two wheelers co-exist in these narrow lanes, where the families who live on second and third floor always send their baskets down tied to a rope for the local subziwallah to share his daily fresh ware.

Then there is Purani Dilli that is great for nostalgia junkies and foodies. A wide range of food – paranthas to jalebis to Biryani – jostles here. There are people here from all kinds of strata: the friendly bangle-sellers, the pigeons that hover at Jama Masjid, the old havelis which you can visit if you know someone who knows some family member and can show you certain brass items which are only available in antique shops, the gaggle of women as they negotiate prices while shopping for their niece/daughter/neighbour’s daughters, buying trousseau as you still sit on the gaddas instead of impersonal chairs.

There is then the majestic Lutyen’s Delhi, the Christmas goodies at Wenger’s as one strolls around Cannaught Place, the breathtaking view from Rajpath, the India Gate as it glows in warm sunset lights, the well-dressed people frequenting GK markets, the backpackers in the lanes of Patparganj which is the same place where the battle of Patparganj was fought between Marathas and British, the swanky cafes in Khan market, the fish markets of CR park. The difference in food, accent or style of clothes just few kilometres apart gives Delhi the amazing vibrancy that can be mind-boggling and charming at the same time.

Besides all this, the walks through the city make you fall in love with the tombs of various Mughal kings, the magnificent architecture, art film and Sufi festivals, which you can simply slip into while wearing the choicest of Pashmina even while visiting the narrow by lanes or slithering gullies that house the Hazrat Nizamuddin Dargah or the tomb of Aamir Khusrau. As you walk here, you soak in the atmosphere that sometimes seems from another era altogether and learn to ignore the glances of men on women. You take in the sights and sounds of stalls on both sides of the street offering sherbets, prayer beads and mats, golden thread embroidered chaddars, sweets, and lamb delicacies – a locality known for pilgrims and weekly qawwalis, where God is invoked through music and music alone.

As I walk through such different cities and towns in India, one common observation that constantly hits me is that the ones who have less always try to share more and the underprivileged children smile more when you talk to them. The dogs you meet on the streets are the same everywhere: they include you in their packs, wag at you, and sometimes even follow you around nonchalant about your status and who you are.

Bio:
Gargi Ray Chakraborty is a communications professional, nostalgia junkie, crime thriller and coffee addict. She lives the suburban life with multiple pets and plants and hopes that one day non-humans will have equal rights to mother earth.

Tags: flanerie, Flaneur, flaneuse
From: Issue 1/ Beyond Mumbai, 2012
← Meandering through Vertov’s ‘kino-eye’ and City Symphonies of the 1920s
Flaneuse in an Indian city →
No comments yet