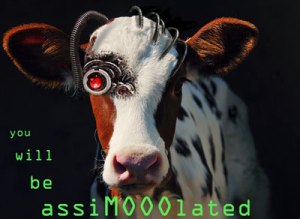 The Chthulucene needs at least one slogan (of course, more than one) … I propose “Make Kin Not Babies!” Making kin is perhaps the hardest and most urgent part. (Haraway, 2015)

… We have grown in numbers and disturbance to Gaia, to the point where our presence is perceptibly disturbing … the human species is now so numerous as to constitute a serious planetary malady. Gaia is suffering from Disseminated Primatemaia, a plague of people. (John Gray in Straw Dogs: Thoughts on Humans and Other Animals, 2003, p. 15)

The project before us is not an extensionist one (expanding the definition of the human to allow a few racialized groups or preferred ape species in) but rather a reconstructive one (reimagining humans, animals, and nature outside of systems of domination). In ecological terms, time is indeed short. But there is still a chance to open ourselves to each other, to see each other. There is still time to become and act together (Kim, p 287). [Claire Jean Kim, Dangerous Crossings: Race, Species, and Nature in a Multicultural Age, Cambridge University Press, 2015]

The ape comparison was more than just a forceful metaphor meant to denigrate or express difference; it was an indicator of whites’ uncertainty and ambivalence about how to think about the Negro and their imaginative placement of him in the human/animal borderlands where he was variously seen as subhuman, not quite human, almost animal, actually animal (Kim, p. 35).

This issue of Café Dissensus is an attempt to locate the chain of equivalence between various creatures and that prompts us to think of the human as the humanimal, who can inspire us to re-write history not as human history but as what Dipesh Chakrabarty says, “species history” that includes the history of all the other creatures apart from the human. The hubris of human supremacy and the resultant greed for human developmentalism reached its height in modern times and “Modernity is a deal,” according to Yuval Noah Harari, the author of Homo Deus: A Brief History of Tomorrow (2017) and this deal or “The entire contract can be summarised in a single phrase: humans agree to give up meaning in exchange for power.” That power, he suggests, may in the near term give us godlike attributes: the ability to extend life spans and even cheat death, the agency to create new life forms, “to become intelligent designers of our own Galapagos … The new longevity and super-human qualities are likely to be the preserve of the techno super-rich, the masters of the data universe… Homo Deus is an “end of history”… there is a new religion: Dataism.”

Our proposed Cowborg manifesto imitating, of course, Haraway`s Cyborg proposal written in early 1985 is an attempt to defy this new religion of data-empire and human manipulation. The symbolic numinous code of philosophy and metaphysics around the practice of animal worship in ancient India is being redesigned today in the form of animal-nationalism and that suggests the murder of metaphysical meaning to gain political colonization of the life-world. For Haraway, the Cyborg manifesto was an attempt to expose the shortcomings of traditional Western rationalist philosophy as it is premised on rigid norms of binaries and dichotomies between humans and non-humans, man and machine, secular and post-secular, etc. Such divisive ontology, according to Haraway, is fictional and opposing such conventional binaries she proposed the idea of the cyborg which, in her view, is an amalgamation of human and the machine or the human and the non-human. In fact, her objective in scripting the Cyborg manifesto was far-reaching as by conceptualizing the cyborg she was actually trying to constitute a new form of consciousness and political activism. She envisaged a hybrid or mixed state of being, a more, complex, ambiguous, and fluid identity. She even characterized her position as ironic and irony is about humour and serious play or ludic that can liberate us from the tyrannical closures of binary. Irony is also therefore a rhetorical strategy and a political method and this ironic method should be honoured by any avant garde or progressive future political mobilizations. For Haraway, at the heart of this ironic strategy lies the figure of the cyborg.

For Haraway, the “cyborg is our ontology; it gives us our politics”. It is an image of both imagination and material reality and the cyborg is a creature of the post-gender world. It has no origin story and hence does not depend on any origin myth of original unity, it is oppositional, utopian, and completely without innocence, it “would not recognize the Garden of Eden… it is the illegitimate offspring of militarism and patriarchal capitalism … [and] illegitimate off springs are often exceedingly unfaithful to their origins” (458). The cyborg appears in myth precisely where the boundary between human and animal is transgressed (459). In cyborgs, the “transcendental authorization of interpretation is lost and with it is also lost the ontology grounding Western epistemology.”  Who cyborgs “would be is a radical question; the answers are a matter of survival (460). A cyborg world “might be about lived social and bodily realities in which people are not afraid of their joint kinship with animals and machines, not afraid of permanently partial identities and contradictory standpoints” (462). Cyborg society is made of affinities related not by blood but by choice. Our proposed cow-borg society can be the one that deepens greater creaturely cosmologies, better conviviality among others, something that deepens kinship and tentacle-like thoughts among all in a creature-democracy. If Hindu mythology coalesces the cow and the image of the mother, then this cow-borging must enfranchise all in a non-hierarchic ontology of immanence. In other words, cow-borging would be the Deleuzian ‘becoming minor’ or ‘the becoming animal’ and cannot be selective cultural protectionism.

Closely connected to such idea of choice or radical opening is Deleuze`s notion of ‘becoming animal.’ It helps us to think about animals and human-animal relations outside a strictly human vantage point and to decenter human subjectivity in a radical way (9). From Speciesism to Becoming Animal: Logos, Care and Zones of Indistinction? (Before the Law: Humans and Other Animals in a Biopolitical Frame)

All the contributors in this issue have focused on various aspects on human animal conviviality. Brainne Donaldson in her lead essay “Becoming “Before” The Damned: Radical Religious Vision/s for the Animals, Earth, and People to Come” philosophises on creative use of metaphysical insights on human animal indistinction. In his essay, “Humanimality” Felice Cimatti foregrounds the central issue of humanimality by defining and elaborating on its various arguments. Richard Iveson`s piece “Wo und Ob: Heidegger’s Animal Differently”, as its name suggests, revisits an unexplored work of Heidegger that engages with the animal issue. Manas Dutta and Tirthankar Ghosh in their reportage-based work, “A Parliament for Elephants: Encroachment, Laws and Animal Rights”, raises the serious issue of elephant deaths on railway tracks in North Bengal. Their report testifies to the immediate implementation of animal rights based laws and reformulation of our attitude to animals. Bashabi Fraser’s cat trilogy poetically renders the shared respect and the affective response to one of our co-beings, the cat. This issue also contains two interviews, one with Matthew Calarco and Dipesh Chakrabarty. Calarco`s views throw fresh light on critical animal study. Dipesh Chakrabarty spoke in detail on “species history” that decenters human supremacy.

Guest-Editor:
Anindya Sekhar Purakayastha is Associate Professor, Kazi Nazrul University, India. His current research engages with issues of the Anthropocene, radical political theology and postcolonial governance. He has been a fellow in the New School for Social Research, New York in 2017. He co-edits Kairos, the Journal of Critical Symposium and is one of the founding members of the Postcolonial Studies Association of the Global South (PSAGS). He can be contacted at anindya.purakayastha@knu.ac.in

Tags: Anthropocene, Humanimal, Planet Earth
From: Issue 1/ Beyond Mumbai, 2012
← Becoming “Before” The Damned: Radical Religious Vision/s for the Animals, Earth, and People to Come
Contributors →
No comments yet