My tribute to Sir Syed: Translation of both editions of ‘Asār-us-Sanadīd’ 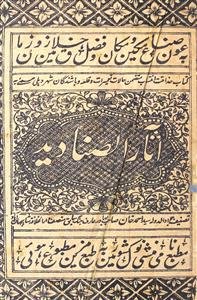 It was destined that I become a chronicler of Delhi’s stories for I had no connection with Delhi whatsoever and had never intended living here. However, a passion for heritage developed into a desire to write about Delhi’s monuments.

I went about buying books to research my subject and I bought Asār-us-Sanadīd (henceforth AS), which I had been told was a seminal book on Delhi’s monumental heritage. At that point of time I was not very fluent in Urdu and that was another work in progress. The terms used by Sir Syed Ahmad Khan in describing architectural features were beyond my understanding, so I tried finding a translation. That led me to Prof. R. Nath’s translation of AS. This book is out of print and I managed to get a photocopy after great difficulty. I later found out that this book was abridged in many places and since it was not easily available and there was a lot of misinformation floating around the work I decided to translate it. During the process I discovered an article by Prof C. M. Naim, which said that there were two editions of the book and the first was full of fascinating anecdotes.

Sir Syed Ahmad Khan (1817–1898 AD) was a munsif (judicial officer) in the service of the East India Company, posted in Agra. In 1846, after the death of his brother Munsif Syed Mohammad Khan, he was transferred to Delhi from Fatehpur Sikri, Agra. Here, apart from his official duties, he took charge of continuing the newspaper, Saiyyad-ul-Akhbar, that was started by his brother and also began working on a book on Delhi. In 1847, the first Asār-us-Sanadīd (The Remnant Signs of Ancient Heroes) was published in the Saiyyad-ul-Akhbar printing press.

This was Sir Syed’s seventh book, but it was very special as it was a fulfillment of his dream to write about ‘the buildings in and around Shahjahanabad, the Red Fort, and about the people of the city and their ways’, something he could not do earlier due to various constraints. He hoped that this book would be a source of enlightenment and bear witness to the impermanent nature of the world, and that it would caution a negligent person and make a wise man even wiser.

This book had four chapters:

This first edition was presented to Mr. A. A. Roberts, who took it to England and presented it to the Royal Asiatic Society. It was much appreciated by the Board and one of the members, a person named Colonel Saxon, suggested that a translation be done in English. At this point, it appeared imperative to Sir Syed that this book be rewritten with additions and improvements.

For the first time in India, a book had lithographically produced illustrations. These 130 illustrations of Delhi’s monuments were drawn by Faiz Ali Khan and Mirza Shahrukh Beg.

In 1856, Sir Syed published the second edition. I call it the second edition because that is what Sir Syed called it but in reality these two editions are two separate books. It was not easy to find the first edition. It was only after considerably long struggle that I got a pdf from British library and got the file printed. The first was an interesting, anecdotal book, which described not just the stones but stories behind the stones. While the second edition is written in simple Urdu, the first was in Persianised Urdu with Persian and Urdu verses embellishing the overall narrative.

The first edition also had a chapter on the People of Delhi. Though Persian honorifics to describe each person and exaggerated praise and extremely Persianised Urdu were music to the ears, it was very difficult to translate. It took me almost 6 months to do it that too with the help from the Mufti sahib of my local mosque. Very soon the life sketches of ulemas, mashaaikhs, poets, khushnavees (calligraphers), huffaaz (memorisers of the Quran), qurra (reciters of the Quran), painters, musicians, and artists started unravelling. His description enlivened them before my eyes. A world of people from a bygone era suddenly came back to life.

Unfortunately, given my lack of knowledge of Persian, I had to abridge the section on life sketches. The rest of the first and second edition I have translated, to the best of my capabilities and understanding, faithfully. It took me 3 years to finish the work but it was worth the effort.

The first edition also had a taqreez or foreword by luminaries of the age. Nawab Ziauddin Nayyar Rakshan, Mirza Asadullah Khan Ghalib, Maulana Imam Baksh Sahbai and Maulana Sadruddin Sadr Azurda wrote these. These were in very difficult Persian and have never been translated before.

I could only translate the one by Mirza Asadullah Khan Ghalib with help from Prof. Aleem Ashraf Khan, Head, Department of Persian, University of Delhi. He translated that specific foreword into Urdu which in turn I translated into English.

Both the volumes are invaluable as they were written before 1857, the year that witnessed the First War of Indian Independence. The volumes are also important because they were written before the British, in the name of suppressing and responding to the rebellion, restructured Shahjahanabad and, in particular, the Red Fort. The work describes the buildings and monuments prior to the informed colonial intervention in the realm of architecture. The glimpses it provides have their own have their own credibility in terms of acquainting the reader with the glory of a bygone age.

The second edition was written in 1854, when the Mughal Emperor was still living in the Qila-e-Mo’alla (Red Fort). The two editions also highlight Sir Syed’s change in perspective and style of writing. His association with Archeological Society of India made him write the second edition in a more scientific manner, which resulted in deleting all the interesting anecdotes, a portion that had a decisive presence in the first edition. In the second edition, he adds the dates in Anno Domini along with Hijri and gives detailed notes on the builders of the monuments. In the first edition, on many occasions, Sir Syed has mentioned that he could not find historical reference about the builders. However, in the second edition, a more detailed perusal of historical texts resulted in finding these details.

The second edition does not include the fourth chapter with the description of the notable people of Delhi. It starts with the description of dynasties of India, and a chart of rulers from Raja Yudhishthir till Empress Victoria. It also describes the origins of Delhi and the various Forts that were built by rulers through the ages. Even Qila-e-Mubarak built by Shah Jahan is described in greater detail. The third chapter has a chronological description of monuments built by nobles and rulers of Delhi. As is well known, in the aftermath of the events of 1857, much of Shahjahanabad was changed. The British broke down many structures to make governance easier. When Lutyen’s Delhi was being built, many more changes were brought about. In my translation, I have added an appendix on the present state of the monuments as mentioned by Sir Syed and have also highlighted the ones lost to us forever.

Translating this book has been a monumental task, as it was the first such book on Delhi’s monuments and history to be written on this scale. Moreover, it has formed the basis of almost every work attempted on Delhi’s monuments in the late nineteenth and twentieth century. Through this translation, I am fulfilling a dream of mine to be able to make this book available to all those who are hopelessly in love with Delhi’s history. It is being published by Tulika Books in association with Sir Syed Academy, AMU.

It is my tribute to the founder of the University I owe so much to.

Bio:
Rana Safvi is a writer, blogger and translator. She holds an MA in Medieval History from the prestigious Centre for Advanced Studies, Department of History, Aligarh Muslim University. After retiring from teaching, she has come back to writing about history, her first passion. She documents India’s Ganga Jamuni tehzeeb via its food, customs, festivals, monuments, and clothes. She writes for various newspapers, magazines and web portals such as The Hindu (fortnightly), Daily O (weekly), Qaumi Awaz (monthly) and The Wire Urdu. She has authored three books and her translation of Asar us Sanadeed is about to come out very soon.