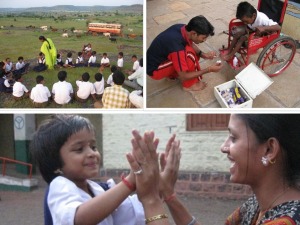 By Manoj Joseph and Srilatha Juvva

The experience of stigmatization is likely to shape the meaning that parents attach to caregiving and its outcomes. One of the classical accounts of stigmatization by Goffman (1963) posits that the possession of “attributes that are deeply discredited” reduce the person or groups who bears it to “a tainted one” (p.3). Anand (2009) points out that contemporary disability theory (which emphasizes the individual with impairment as the principal subject of disability identity) does not offer much insights about how families experience disablement because of their association with the person with disability. Ryan & Runswick‐Cole (2008) state that parents in disability studies were positioned as neither disabled nor non-disabled (p.199). While on the one hand, they do not have impairment, on the other hand, they experience, by proxy, most of what their child with disability goes through, and this impacts their life trajectory. Often, they are in a state of being neither here nor there, due to this betwixt position, representing both the stigmatized person and being the stigmatizer (causing stigma) simultaneously. While analyzing the notion of impairment and disability in domestic sphere, Das & Addlakha (2001) note that the experience of impairment and disability “can be located not in (or only in) individual bodies, but rather as “off” the body of the individual and within a network of social and kin relationships” (p.512). They also note that kinship is an important space “in which the family has to confront ways of disciplining and containing contagion and stigma” (p.512). The research conducted by the first author on caregiving experiences of parents affirms this argument. The study examined caregiving experiences of parents having children with developmental disabilities in a rural setting. It explicated the experience of stigma that the parents encounter in private and public sphere.

Stigma manifests itself in many forms and is often referred to by many terms to distinguish its unique characteristics.

Self Stigma: refers to the process of internalization of stigma by an individual in which individuals endorse cultural stereotypes in relation to a group (Ali, Hasssoits, Strydom & King, 2012).

Courtesy Stigma: Goffman (1963) pointed out that stigma has the “tendency… to spread from the stigmatized individual to his close connections” (p.30). He employed the term, ‘courtesy stigma’, to refer to stigma that some individuals experience because of their association or relationship with a stigmatized person – the stigma experienced by the individuals such as friends, extended family members, and even professionals, who are closely associated or work with a person who is stigmatized.

Affiliate Stigma: The nature of stigmatization that parents, siblings, and extended family members face. Mak & Cheung (2008) coined the term affiliate stigma or family stigma to refer to the process of self-stigmatization in family members. Here, the family caregivers internalize negative evaluation about them by the larger society.

Caregiving Stigma: Stigma is experienced by the family/caregiver where the family not only evaluates itself negatively but also manifests discriminating behaviours due to role strain (resulting from performing multiple roles), lack of reciprocity in caregiving relationship, and multiple caregiving roles. The caregivers experience burnout due to the complex interplay between caregiving interactions and competing commitments in their multiple roles. Therefore, they are forced to make choices that necessarily displease one or the other actors. We noted in our study that parents experience caregiving stigma as a result of multiple influences and mediations in the course of caring for their child with disability, consequently internalizing negative societal evaluations imposed upon them.

We also noted in the study that stigma occurs through interplay of attributes and actions of actors who either act as perpetuator or as a victim of the stigma. Actors who are victimized by stigma can act as perpetuator of stigma. For instance, family members who are subjected to stigma may victimize mothers, who give birth to a child with disability. Thus, the analysis of stigma needs to consider not only discredited attributes of the actors who possess it but their actions and association Parents, especially mothers, having children with disability experience vulnerability to stigmatization from child rearing practices (stems from the image of bad parenting due to the failure of the child to behave in socially acceptable ways) and gestation (disability is genetically transmitted makes them think that they are potential contaminators of the disability) (Davis & Manago, 2015). The identity of the family members is often enmeshed with the disability of the child. The moral grounding of stigma becomes more obvious when people attribute disability to metaphysical explanations, that trace back the causation of disability to the past actions and moral ‘corruptness’ of the caregiver. Further, it challenges the moral integrity of the caregiver.

The parental accounts from our study indicate that it was not unusual among the parents to be accused of ‘culpability in contaminating’. For instance, a few mothers who participated in the study shared that they were blamed as a contaminating person who transmitted unhealthy bodily attributes and dysfunctional cognitive attributes to the next generation. We noted what Davis & Manago (2015. p8) called, “womb blame and womb guilt”, mothers in the study experienced moral devaluation evoked through the belief that they passed on the disability to their child. Many parents, especially mothers, who participated in our study, internalized the view that the disability of their child is an outcome of the health issues during the prenatal and postnatal care. They perceive that illness during the pregnancy and breast-feeding period has resulted in disability of the child. A sense of guilt was noted in the narratives of mothers. For instance, Dilshad[1], mother of an adolescent with cerebral palsy, believes that her child’s disability was the result of the Chikungunya illness she had at the time of breast feeding. She was blamed by the doctors for breast feeding her child during this illness. Thus, she believes that she is solely responsible for the disability in her child.

The gender and biological proximity of the caregiver shapes the nature of parental blame that they are subject to. Research participants shared that there is a widespread belief among the people that the genetic predisposition of mother of the child and her family lineage are responsible for the birth of a child with disability. Hence, they must accept the blame. Such beliefs put mothers in a vulnerable situation where they experience stigma of contamination. It can influence future parental choices with respect to pregnancy and abortion.

It is often presumed that technological advancement can minimize the intensity of stigma that parents experience (Singh, 2004; Blum, 2007). However, the advancement of genetic technology provided a different perspective to the causation of autism. It has resulted in shifting the locus of blame from “mother blame” to “brain blame” (Singh, 2004; Blum, 2007). In a way, the new medical explanation reduces the chances of mother blame (Ryan & Runswick-Cole, 2008). It is equally important to note that the technological advancement has the potential to exacerbate the experience of stigma. Landsman (2009) argues that the advancement of reproductive technologies has increased the chances of parental blame. Her ethnographic study with mothers of children with developmental disabilities documents in depth how parents internalize the blame and live with perpetual guilt feelings. We noted in our study that those parents who made a choice to proceed with the pregnancy, despite knowing that something could be ‘wrong’ with the fetus, experienced ‘the stigma of being a bad parent’. The choice of accepting a child with disability imposes additional parental culpability for bringing suffering to the child with disability and other family members.

Our study further indicates that multiple role expectations from caregivers can be another source of caregiving stigma. The multiple roles that the mothers play is often underestimated and often little space is given to them to express themselves. This stifles her and restricts her choices to act, thus causing strain in her performance of the role as well as in accepting the current situation that she is in. In such a situation, the mother may feel compelled to withdraw, engage in unhelpful social interactions which are recursive as they generate more negative energy rather than healthy adaptation.

Caregiving stigma is mediated by gender and proximity of the caregiver. It is noted that mothers’ caregiving proximity and powerlessness make them easy targets for stigmatization. Not only is the caregiving stigma internalized and acted out, it influences subsequent interactions, actions and consequences of the process of stigmatization. The intersection of disability, gender of the child with disability, gender of the caregiver, and overall socio-economic status of the parents work in tandem to impact the gravity of stigma and stigma aspersions on parents. This has implications for generation of knowledge, practice, and policy.

[1] Pseudonyms have been used to conceal identity of participants of the study.

Bios:
Manoj Joseph is associated with the School of Rural Development, Tata Institute of Social Sciences, Tuljapur, Maharashtra. He teaches courses on Social Work at graduate and post-graduate levels. His research areas include disability, caregiving, and inclusive education. He can be reached at manoj@tiss.edu .

Srilatha Juvva is a social work educator with experience in research and capacity building in the sectors of training in mental health and disability. She has recently co-edited a book on Spirituality, Culture and Development: Implications for Social Work Practice (2016). She currently works with the Centre for Disability Studies and Action, School of Social Work, Tata Institute of Social Sciences as Professor.