The Citizen and the Constructed Other − Bangladeshi Migrants in West Bengal

South Asia has witnessed massive population movements across the national boundaries since 1947, especially across the borders of India, Pakistan (both East Pakistan as well as West Pakistan), and later Bangladesh. Migration from Bangladesh to India at various epochs is characterized by dynamism and complexity. The divide needs to be contextualized within the centuries-old shared history, an acrimonious partition of territory in 1947 on the basis of religious identity, and the division of Pakistan in 1971, and, subsequently, the emergence of a smaller, less secure state of Bangladesh, surrounded on its three sides by an assertive regional power like India. Migration from Bangladesh has assumed to be an indispensible phenomenon in the last few decades owing to the large-scale resourcelessness resulting from not only environmental factors, but also politico-religious factors hinting at seeking refuge in India, that is perceivably a solution to the crisis. However, any attempt towards catering to the need is threatened by alerts around questions of national security and identity, and invariably thrusts into the domain of high politics. A silent diplomacy operates as clandestine migration takes place devoid of objective records.

Mobility of population in the Indian subcontinent and across Bengal represents a pre-existing phenomenon. Borders defied the objective demarcation of territories since there are stark differences between the imagination of a nation and the objective existence of it. This ambiguity over objective categories has shaped Bangladesh-to-India migration in all decades. Partition added a politico-religious context to it since political boundaries and borders were created, primarily on the basis of religion. The de facto citizenship for Hindus has assumed a continuous phenomenon since partition.

After partition of India and the emergence of the states of East and West Pakistan, migration of individuals to India from Pakistan was regulated through documentary regulation, on the condition that there was evidence of threat to life in the other country. It resulted into a de jure othering of the Muslims in India as it had been hard to convince one about the potential threat of a Muslim in Pakistan. This implied that only Hindus would be granted accommodation within the territory of India, which continues to the present decade. The migration certificates, introduced by the government in 1956 to permit entry only to people ‘in certain special circumstances such as split families and girls coming into India for marriage’ also involved religious bias and was exposed to subjective interpretation regulated by the politicization of religion, which may be termed as a politicized Hinduism. The concepts of hyphenated citizenship of Gyanendra Pandey (2006) and proxy citizenship of van Schendel (2002) assume specific importance in this context. Hyphenated citizenship refers to a hierarchy of citizenship practiced by all nation-states, which is manifested in a distinction between its unmarked, seemingly ‘axiomatic’ or ‘natural’ (Ibid.) inhabitants and its marked, ‘hyphenated’ (Ibid.) minorities. In defining ‘proxy’ citizenship, Van Schendel conflates religion and nation in explaining how one’s religious affiliation confers citizenship, moving beyond the objective paradigm and understanding how citizenship is re-defined and experienced. Hindus in Pakistan would comprise proxy citizens, similar to the status of Muslims in India. The right-wing political group’s mandate that differentiates legitimate refugees and foreign infiltrators, aiming to deport the latter, thus, does not mark any major break in the politico-religious attitude, but represents a continuum.

The separation of the migrant from its citizen has persisted over the decades, and the distinction is largely based on the construction of a migrant vis-a-vis the citizen. The lack of an objective framework deters the creation of a legal frame against which legality and illegality can be determined. This results in subjective definitions of legitimacy and illegitimacy. The undocumented exists beyond a universal law that also speaks about their exclusion from any well-defined category; defining would imply counting on them, which in turn implies accountability towards them on the part of the state, both Bangladesh and India. Mechanisms to control would thus exist in informal forms.

The lack of a concrete framework to categorize Bangladeshi migrants has resulted in subjective conceptions about their identity. Individuals may be perceived as actors, whose own definition of the situation forms a significant point of departure. It helps us understand the situational definitions and fluidity and ambiguity of the categories in everyday life. This complicates the constitutional definitions of concepts, as in the common sense usage, the definitions of categories largely depend on subjective constructions, influenced by one’s own definitions, and ideas of determinants, mediated through language, religion, appearance and region. The collective signs create frames of reference to identify individuals with attributes that construct an illegal migrant. These influence suspicion not only among the plebeian, but also within the bureaucratic procedures. The officials of the BSF ‘understands about an individual’s origin by looking at’ (as a participant puts) her or him, relying upon signs that leads them to suspect, resulting in arrests, the act being based on a homogenized frame within which one situates an undocumented Bangladeshi migrant. The point of convergence of these signs forms an interesting locus of understanding. 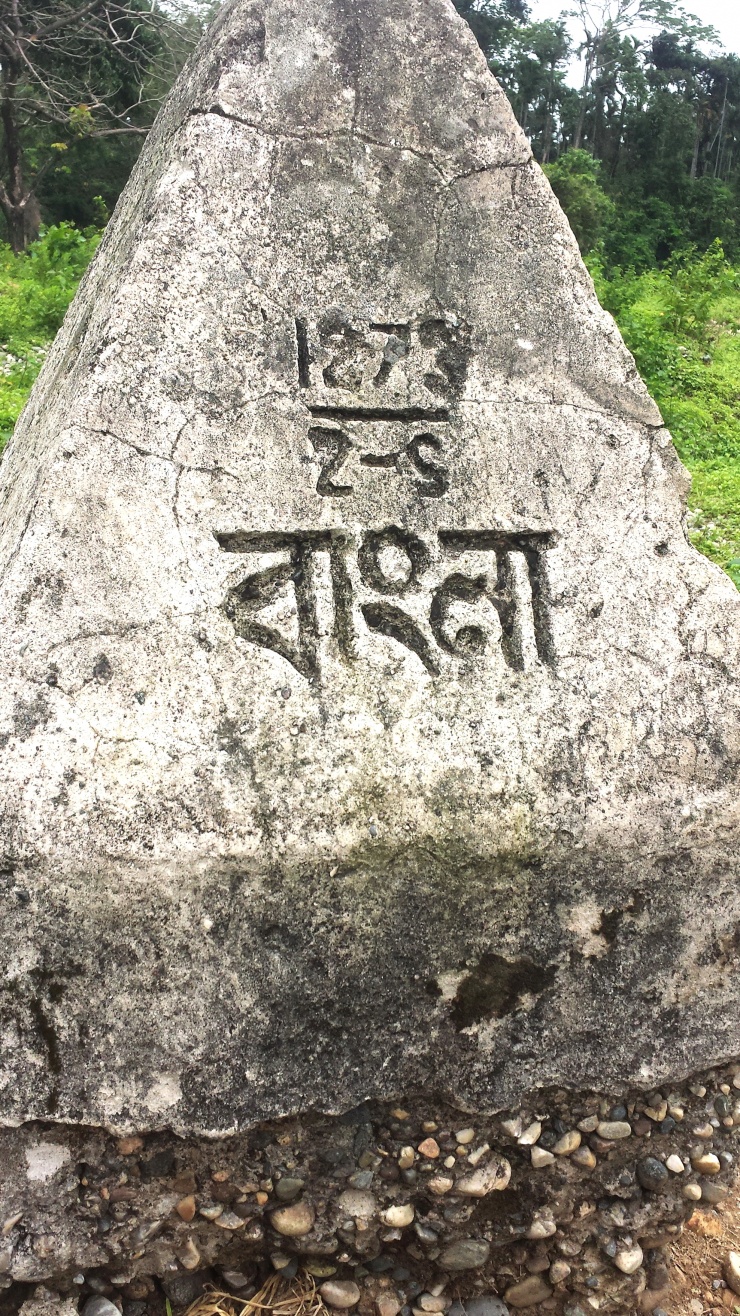 Language, as a facilitator or a mechanism to integrate is contingent upon the relative nature of instances. While the native dialect of the Rohingyas helps them to claim citizenship in Bangladesh, it assumes a negative connotation in India as it aids the frames relied upon by the BSF for carrying out the majority of the arrests of Rohingyas infiltrating through the India-Bangladesh border. While some resist by adopting ways of speaking, deviating from the typical dialect, that a Rohingya speaks thereby being able to escape detainment others would be subjected to branding as trespasser (drawn from an interview with a researcher). This is how language becomes an easy determinant of origin and nationality, amounting to the assumption that Bengali in a twisted dialect would entail suspicion about one being of Bangladeshi origin.

Association of region with the dialect is experienced not only at borderlands, but within the urban metropolis of Kolkata, where an apparent non-urban woman speaking in the Bangal dialect would be taken as being either from Assam or from one of the adjoining districts of Bangladesh (drawn from a participant’s experience, shared during an interview). The symbolic relationship between appearance and language is important. When religion is added to the mix, the situation becomes even more complex. Individuals who would not be placed within the semiotic frame, would be deduced and identified as Hindus and would be treated with lenience by the officials of the BSF and their tales of struggle would be perceived sympathetically as they are taken as the natural citizens of the country. In contrast are the visible Muslims who would be subjected to stringent surveillance. This explains the lesser number of Hindus being reported as infiltrating borders.

Signs exist and operate in the absence of any legal framework and results in discriminatory measures. These discriminatory standards used to persecute undocumented migrants from Bangladesh in India receives state patronage as is manifested in activities the state takes recourse to during various epochs in the form of periodic outbursts of nationalist sentiments and xenophobia. Bengali-speaking Muslims, identified as Bangladeshi undocumented migrants, have encountered recurrent victimizations. Such instances have occurred in Delhi at Amar Colony Basti, as traced by Anupama Roy (2010) on her work on citizenship and in Mumbai in April 1995 following mandate of the Shiv Sena Government (Ahmed, 2000).

The categories of legality and illegality exist through the coinage, designed through governmentality. This framework effaces our self-beings, replacing them with those formulated and operated through a universal, pre-conceived paradigm. The structures often lead to local constructions of identities that follows from the process of othering of these migrants as is brought out by Petra Dannecker (2005), and Anupama Roy and Ujjwal Kumar Singh (2009). The othering process of the Bangladeshis in India operates through multiple layers, falling back upon linguistic differences, manifested in teasing one for being a native Bangladeshi and not being able to master the ‘clean’ (as a participant puts) dialect of Kolkata. It operates through layers that include the time or means of migration. Those who migrated through legal means and attained legal citizenship would not patronize those who took recourse to clandestine means. Such divisive relationship also exists among those, who migrated recently and those who arrived earlier, and among those with differences in religious affiliation. A participant explained that the ‘sons of the soil’ would not accept Bangals, whose stature may be compared to those of the Mohajirs of Pakistan.

Exclusion from multiple spheres is a usual phenomenon for the migrants, who are territorially limited to Amar Colony of Delhi, as Anupama Roy (2010) has explained in her work on citizenship, or the Raey Road of Mumbai, as a researcher (participant in my research) explains, or the colony near the railway station of Basirhat in the north 24 Parganas of West Bengal, as I located during my field work. Their territorial location makes them vulnerable to state action, signifying the stigma attached to the place as is brought out by Loic Wacquant (2008) in his classic study of the ghettos of Chicago and balieus of France. The act is an example of how individuals are deliberately relocated by framing them as migrants, irrespective of their place of origin or nationality. The stigma operates through labels, the place being branded as a locale witnessing rampant nuisance on account of the Bangladeshis living there.

The lived experiences of a migrant does not depend so much on one’s status as a documentary citizen (as Sadiq Kamal [2008] explains), but on subjective realities. It is here that the notion of dignity percolates as Oommen (1997) explains, stressing on the importance of dignity in everyday life, necessary for survival. The dignity is determined by the subjective dimension of identity construction. It is particularly pertinent in relation to Bangladeshi migrants, whose identity is largely contingent upon their fitting into constructed frames of a citizen beyond the objective, thereby defying claims of documentary citizenship.

Schutz, A. (1967). The Phenomenology of the Social World. Evanston: Northwestern University Press.

Bio:
Anindita Chakrabarty is pursuing her Ph.D. in Social Sciences at Tata Institute of Social Sciences, Mumbai on Undocumented Bangladeshi Migrants in India.

Tags: Bangladesh, India, India 70, Pakistan, Partition 70
From: Issue 1/ Beyond Mumbai, 2012
← Bureaucratizing “choice”: Longing, belonging, and not knowing in the India-Bangladesh exchange of enclaves
“We want freedom” ~ Kashmir, a photo essay →
No comments yet