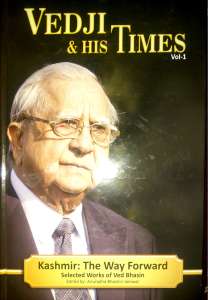 Ved Bhasin Jamwal, fondly called Vedji by people, was the founder of the reputed newspaper Kashmir Times, published from Jammu. He was known for his intellectual honesty. Following his death in 2015, his daughter compiled a book by collecting his thoughts. His neutral posture on the Kashmir dispute is remarkable. Admirably, he managed to maintain this sense of objectivity even in the most difficult times when people in Jammu favour the status-quo, while a frozen anger is exploding in Kashmir against India.

Vedji has always been the sane voice of people seeking justice. Peace, even if it means only silencing of guns, has been eluding the valley of Kashmir since it hitched its knot with India.  But Vedji was ill at ease with this perspective of peace. He welded peace with justice and demanded that it has to be people centric. He held the view that for ushering in the peace in South Asia, the resolution of the Kashmir dispute, the bone of contention between two nuclear-armed states is imperative. Ever since the Partition in 1947, India and Pakistan continue to have an arm’s length in their relationship with each other. The horrible reminiscences that partition produced continue to be narrated orally and through distorted social science textbooks, often with communal tinges. Both nations are obsessed with the Westphalian state system and Kashmiris, who constitute the majority in the state, are living between the devil and the deep sea.  Kashmiri people are sandwiched between the integral part doctrine and jugular vein theory of India and Pakistan respectively. But both the narratives reflect the obsession of countries with the land. Therefore, Kashmir dispute, for Vedji has been the cause as well as the consequence of their perpetual enmity, and with both India and Pakistan going nuclear, it has become a potential flashpoint as well.

Why is it that both the nations have failed to resolve the conflict despite having the prescription of plebiscite recommended both by India and the United Nations? In the early years, India suggested Plebiscite but Pakistan dithered; now Pakistan is insisting on it, India is hemming and hawing. Kashmiris figure nowhere and they continue to be traded off just like they were purchased by the oppressive Dogra rulers from the British through the Treaty of Amritsar for 75 million rupees. Both the nations have created erroneous narratives regarding Kashmir. For India, it is the sine qua non for its spurious secular models that it has come to represent, while Pakistan naively believes it is guaranteed to it under the truncated two-nation theory. The Kashmir dispute and the tragedy that has befallen on the divided people living under the regressive control of both nations is the post-colonial condition.

According to the Indian narrative, Kashmir has merged with India, but for Vedji, the bare truth has been that only accession was signed, and that too was a conditional one. India made accession conditional for sending troops to Kashmir. Accession was accepted with its fate to be decided by its people, a promise yet to be fulfilled. Hence the accession has not only been conditional but is also limited in scope providing little leeway to the Indian Parliament to control Kashmir. The commitment of India to plebiscite may not be a legal or constitutional requirement but still, it is certainly a moral one. If India and Pakistan don’t agree on plebiscite, it can’t be denied to people of the state of Jammu and Kashmir.

Vedji stated that one of the objectives for the formation of the Constituent Assembly was to consider the future of state but the blatant rigging of elections for it, against which even the Jana Sangh protested was followed by the dismissal of Sheikh Abdullah; therefore, the Constituent Assembly suffered a lack of representative character. Until the final decision is to be made by the people, the state was to enjoy full autonomy. But as the years rolled on, India’s stance was to extend its powers in Kashmir through a rigged election process. This process has generated a new layer of complexity to the already deteriorating New Delhi-Srinagar relationship. Vedji argues that the much talked about Shimla Treaty, which considered Kashmir dispute as a question of bilateral dispute between both nations, failed to yield any payoff because as the principal party, the people of Kashmir, were neglected. For him, the Kashmir conflict is not a land dispute but concerns the people of Jammu and Kashmir and two countries figure only because it is both cause and consequence. Primarily it is the people of Jammu and Kashmir who have to decide its future and final settlement.

Bengal and Punjab are often considered as the epicenters of communal carnage during the Partition but a similar tragedy of communal slaughter occurred in Jammu. Vedji was a witness to the gruesome and horrible massacre, for which he put the blame squarely on the goons of the RSS and the armed forces of last Dogra king, Hari Singh. The trouble in Kashmir can’t be dismissed as inspired by the Inter-Service Intelligence of Pakistan or a proxy war by Pakistan. Pakistan only exploited the situation. The truth is that it was a popular movement widespread in the Valley. The policy of suppression pursued by India has not succeeded in Kashmir but only besmeared India’s reputation. Even if suppressed, it is bound to recoil.

For Vedji, militancy is a consequence, not cause, of unrest and alienation. Unless the Kashmir conflict is resolved, alienation will continue to grow. It is a political problem that can’t be dealt with military forces. It is only through political solution that aspirations can be fulfilled.

Failure to reconcile Kashmiri nationalism with Indian nationalism and reconcile divergent aspirations of different regions is the cause of Centre-state and intra-regional conflict. The elite of both countries has vested interest in the perpetuation of the conflict even though the people are interested in peace. The present inter- and intra-regional conflict is the result of the centralized political system India has created in the State. Erosion of autonomy, failure to uphold the commitments and promises made to the people to ensure free and fair elections, and the imposition of puppet regimes are the root cause of increasing alienation. The RSS’s demand for the division of Jammu and Kashmir is in tune with the concept of Hindutva definition of who is Hindu. It flows from the RSS mistrust of Muslims in general and Kashmiri Muslims in particular. It has never reconciled to the end of Dogra dynasty; transfer of power, or land reforms.

The colonial approach of New Delhi has resulted in grave human rights violations, killings, rapes, and extortion. Kashmiri people are made to believe in the secular model of India, repeatedly asked to believe in Kashmiryat, the Hindu-Muslim bonhomie in Kashmir, while Muslims are killed in communal riots outside. Such a spurious model can’t inspire Kashmiri people.

The alienation of Kashmir is worse than its secession. Vedji’s cogent argument has been that if Kashmir remains friendly as an independent nation, it is a better proposition than staying in the federation by force. At one time, he believed Kashmiri people were reconciled with accession, but the imposition of regressive regimes and undemocratic conditions created by India changed all that. Kashmiris elected one set of people but India put another in power, and they were forced to take guns. Pakistan was in search of an opportunity and India readily supplied it. Pakistan is not leading a proxy war; it is basically a people’s war and Pakistan has exploited it. It has been to the advantage of India to present the struggle as a fundamentalist struggle and engender fear psychosis to take advantage of the prevailing anti-Muslim sentiments around the world.

The book is a brief, lucid and pithy narrative on the Kashmir conflict. The assertions by Vedji lends credence to the fact that alienation in the Kashmir valley against India is not because of Pakistan but have a rock-solid base due to the ill-conceived policies of India.

Bio:
Ahmad Zaboor is lecturer in political science, and a freelance journalist in Kashmir. He has got papers published in South Asian politics. He has been a regular contributor to Kashmir Images, Kashmir Reader, Milli Gazette, and Café Dissensus.

Tags: Bangladesh, India, India 70, Pakistan, Partition 70
From: Issue 1/ Beyond Mumbai, 2012
← “We want freedom” ~ Kashmir, a photo essay
The Dogs of Tithwal: Imagining Animals in Partition →
No comments yet