Musical Tales of Choices and Sacrifices: A Review of Mitra Phukan’s ‘A Full Night’s Thievery’ 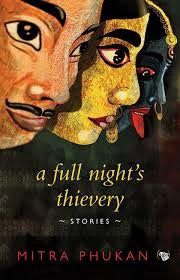 A Full Night’s Thievery (2016) is a collection of thirteen short stories by the renowned Assamese writer, Mitra Phukan. Written over a rather long period of time, it is a pleasurable experience to both senses and emotions. While going through the stories, one cannot miss the melodious tone, the variety of notes, and the resonant language with which the musician-cum-writer treats us. The stories are diverse in terms of theme as well as setting. Subjects such as a struggling artist, an agonised mother, an upcoming musician, a local thief, a devoted wife, a superstitious businessman, a young widow, a victim of insurgency, a betrayed wife, a hypocrite guruji give the collection a note of familiarity as well as wide range.

Seen closely, these are stories of common men and women, who at some unusual juncture in their lives must make those choices and even sacrifice which would alter their lives forever. These underline the unbound capacities of human beings to bend, to negotiate, to manage, and to cope and, also, to come out of the dark bog, sometimes successfully, and sometimes irrevocably changed. However, what stands out in these dramas of human life is the jijivisha, that indomitable spirit we all have within us.

Thematically the world of music dominates three stories, titled, “The Choice”, “The Tabla Player” and “Eklavya”. “The Choice” is about a successful musician who must give up his beloved instrument, his most valuable possession, the Rudra Veena, for the sake of something much more precious. Written in the form of a dramatic monologue, which is quite unusual in a prose work, the narrative moves languidly and there are notes of procrastination, which perfectly suit the subject-matter in hand. “The Tabla Player” records how the protagonist unintentionally loses most of what matters in his life in the pursuit of his art. “Eklavya” is the story of an upcoming musician whose devotion towards his supposed master fails him utterly. Despite their differences, the stories play upon the fundamental binaries between art and life, art and human values, and finally between reality and illusion.

The ingenious strategies of women to deal with the infidelity of their husbands are at the core of other three stories. “The Reckoning” represents how a wife after years of humiliation from the cheating husband finally hatches a plan to settle a score sadistically in the fashion of a detective fiction. “Jogeshwari” is denser in psychological depth and is about the working of the alter-ego of the suffering wife, who takes recourse to black magic to get rid of the insensitive husband. In “The Revenge of Annapurna”, the woman chooses to become too good to be cheated for long, to become the goddess of plenty to fight injustice and to “not only survive, but to live with dignity.” Coming from a woman writer about the predicaments of women and how they bend, twist, undercut, and subvert the norms of being a “good wife” reminds one of Anita Nair’s Ladies Coupe, where six women share the stories of their negotiations and survival in life. However, this collection cannot be called only musically layered or women centric – the two identities that we generally associate with the author, Mitra Phukan. A range of human emotions and experiences have been covered in these thirteen stories and each story in itself offers much more than just one broad brushstroke. For example, stories like “The Homecoming” and “The Gift” depict the experiences of ageing and loneliness, but also assert how memories of good times and the rhythm of everyday life can give a sense of solace in difficult moments. The significance of parent-child relationship is, in fact, at the heart of many other stories. However, the most poignant and at the same time disturbing one is “The Journey” that deals with a less touched upon subject and still lesser opted choices and sacrifices. In contrast, “A Full Night’s Thievery” and “The Ring” are lighter and humorous in tone, and attest to the writer’s capacity to retain the interest of the readers without taking recourse to serious emotions and feelings.

If one believes that the narratives by Assamese writers should be Assam-centric, then this collection may disappoint them a little. While stories like “The Choice”, “The Journey”, “The Tabla Player” are not set in Assam, in many others, like “Eklavya” “A Full Night’s Thievery” Assamese history, folk culture, and Assamese lore form a part of the background only. “The Spring Song” and “A Long Journey” are the two stories where the local flavour is foregrounded and there are direct references to the unrest that mar the state of Assam. Both are about young and vigorous Assamese women, who make unconventional and even risky choices for themselves, despite being fully aware of the dire consequences. While one decides to move away from an incarcerating relationship, the other decides to fight back those who extorted much more than just money from her. “The Spring Song” gives a beautiful picture of Bohag and the Bohagi songs, something which every Assamese holds very close to his heart, and the other one with references to bomb blasts, violence, and extortions become an equally familiar experience for the locals. Frequent allusions to familiar Indian myths and mythological figures like Eklavya, Kali, Durga give the collection a kind of broader range, and at the same time the use of local Assamese terms like Daktor babu, Tridib ukil, daroga babu, the mastor and mastorni, Ajoy Dukani, etc. give a local favour to the stories.  In fact, regional Assamese words like dhuti sador, alna, mekhela sador, Biya-Naam are used unapologetically and rightfully, too.

Here we have stories of unique individuals, who are surely shaped by the society, but do not represent any specific social issue. More than being stories of social problems, these are stories of personal life that unfold without ever being registered in histories. The protagonists are commonplace people with their own virtues and weaknesses, and their unique capacity to deal with a challenging situation in life. This is one of the reasons why even when the distinction between rationality and irrationality, reasons and superstition is blurred at times, as the readers go through the stories, the choices and actions of the characters come across as the most natural responses to their lived experience. For example, in “The Choice” the myth of the curse upon the Rudra Veena becomes real for the musician who finally chooses his son’s life over the Veena. The protagonist of “The Reckoning” is sure that by indulging in her craving for revenge, she has invited disaster, “Tempted Fate. Given ideas to the Gods.”  Rationality is challenged at much larger scale in the story titled, “Jogeshwari”, where a medieval devotee of Kali successfully performs black magic to avenge her wronged mistress.

As a whole, this collection, just like any other artistic form, offers a lot and misses out on many aspects at the same time. Most importantly, coming from a woman writer from Northeast India, it comes as a breath of fresh air, for not being solely about women and other clichéd aspects, like insurgency, terrorism, and violence per se. Mitra Phukan deserves accolades for doing this offbeat job with a sense of musicality. A Full Night’s Thievery is not only starkly inviting, but it also has the power to leave a lasting impression on the minds of the readers with memorable lines such as: “Music is a harsh taskmaster, one that does not acknowledge the ties of friendship or family”; “Like any other self-respecting town, it [Rupohi] had a thief as well. For having a local thief was a marker of the affluence of the town itself”; “One can battle injustice, evil, badness. But how can one battle a sense of duty, and just plain goodness?” and many others.