Manhood in the Age of Hindutva: Notes from the challis of industrial Ahmedabad 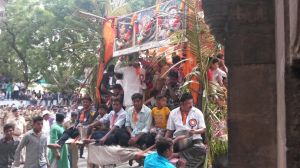 In the context of Ahmedabad, research has demonstrated how collective violence brings together the nation, the neighbourhood, and the bodies of participants and how public spaces are being expansively appropriated by the Hindu right to display violent rewriting of the mainstream city’s landscape as a sacred, national, and Hindu space. This essay attempts to locate Dalit men within this narrative of the city, in order to understand their relationship to the Hindutva ideology.

The RSS and VHP had started working in the Dalit-Muslim areas of the city from the 1980s, altering food habits, lived religiosity, and transforming the physical space by introducing their own form of urban organisation – naming neighbourhoods as ‘prakhands’ (Sanskrit name for units) and calling the city Karnavati and claiming India as a Hindu nation. Saffron billboards renaming and reclaiming the neighbourhoods with clearly established links to the Hindu nation had taken over both the upper class Hindu part of the city and the mixed mill areas of the city. Makeshift borders and boundaries between neighbourhoods were being redrawn with temples and shrines being used to mark these boundaries. Not only was the (Hindu) nation brought to the neighbourhood, a new administrative order was being established under the various wings of the Hindu nationalist organisations and divinity was incorporated into the project of reclaiming the Hindu nation and seducing Dalit men and women into the project.

Hanuman, the loyal dutiful servant of lord ram, a symbol used by Bajrang Dal to claim loyalty and subservience from the lower castes, became the symbol of this new divinity. In 2005, I counted 63 makeshift Hanuman shrines in the area that were developing into mini temples. Hanuman was also being reincarnated into ‘hulladiya hanuman’ (riotous hanuman), sankat mochan hanuman (the one who takes trouble away), vignahari hanuman (the averter of all trouble); this new incarnation of divinity was having an impact on lived religiosity in the area. The emotional connection was appealing to the young men imagining themselves as ‘soldiers’ in Hanuman’s army and playing a role in saving the Hindu Nation. Hanuman’s martial, masculine and Brahmacharya /bachelorhood were celebrated virtues and local akhadas or martial training camps were opened for free access. This played a crucial role in incorporating working class masculinity into the revivalist upper caste idea of Hindu nation while simultaneously maintaining caste and class hierarchies; the latter was achieved through cleverly managed circulation of posters showing Hanuman dutifully taking instructions and blessings of Ram. These images reinforced the hegemony of the Aryan/upper caste race and the subjugation of the lower caste in the area as order receiving servants. It was normal for family shrines to have images of local Dalit deities that travelled from the village of origin in Gujarat alongside images of Ram, Hanuman, and Ambedkar. The presence of Ram and Hanuman demonstrated the gradual Hinduisation of Dalit identities. It was difficult to establish when and how these images made it into Dalit households and neighbourhood shrines. While Dalits residents acknowledged it as an organic process and a part of their Hindu identity, anti-reservation activists acknowledged it as a deliberate process on behalf of Hindu Nationalist organisations.

These practices not only influenced how the city was being reclaimed in order to give it a nationalist flavor, but also how  these men viewed  themselves. Young boys in the area told me – ‘Hum Hindu hai’ (we are Hindus) – with considerable bluster; this kind of assertion was alien to their forefathers who claimed their Dalit identity over Hindu identity. This was definitely a response to the aggressively Hinduised and masculinised discourse that sought to keep the status quo by controlling space and imaginations of divinity, gradually incorporating Dalit bodies as soldiers into the idea of a Hindu Nation.

I argue, however, that this pat explanation is inadequate to explain Dalit men’s participation in the violence. During my field research, I struggled to see an overarching ideological cause which could rally these young men together into a cadre nor was there a visible cohesive leadership that was bringing them together into an idea of a unified cultural life. The image of Hanuman, while influential, was not entrenched like the cultural icon of Shivaji was among the working class youth of Bombay. There was fluidity within the positions that these young men took and these positions changed depending on the context. Previous research has shown that participation in violence is a fiction of negotiated half-truths; in this case, the immediate half-truths were circumscribed by the ongoing Hindutva propaganda within these neighbourhoods and the emotive appeals made through watching corpses being brought into the city on the day Godhra happened. However, we also need to place it in the broader context of ideological positions, personal histories, personal relations with people killed, boredom/fun and, importantly, the fear of the city, owing to Dalit men’s physical and structural location in the city.

I was alerted to this aspect in an interview with young boys in 2013, who had looted a factory out of boredom and because it provided an opportunity for wearing and selling jeans. These young boys admitted to not being afraid of death, when questioned about the risk of doing something like this. Vikas[i] said that if he died, his family would have one less person to feed and look after. Sharan admitted that when he was breaking open the locks, he did think that if he was killed, his family could pay off their debts from the compensation money they might receive. Lack of work and opportunities to move out of the areas they were born in further alienated them. Takya was another such third generation migrant Dalit; three generations of his family lived in a one room home in the mill challi as the family struggled to survive after his grandfather  had lost employment in the mills. He said: “The city is expanding, new businesses are coming in, but, we are in a worse place than we were when our parents were in work. We just sit in the area. Run around here and there. I applied to Pizza Hut and to another restaurant in the mall, but I was rejected. We just don’t fit into that environment. We don’t dress like them.” I heard similar stories which illustrated how these young men wanted to be a part of the development narrative of the city; but unable to find work in the new avatar of the city, they saw themselves as outsiders to the city, choosing to hang around at the ‘addas’ and gamble. There were many like Takya who mentioned that their sisters had gone into prostitution and mothers were selling alcohol illegally from homes to keep the family going. Poverty coupled with the pressure to be ‘useful’ and seeing women from their families taking up work that compromised their honour made them even more aggressive in their fight against Muslims as participation in violence became a tool of self-validation.

It is thus evident that some of their actions were conscious, some unconscious, but always pragmatic and were about surviving the city and their marginal spatio-historical location within the city. I contend that young Dalit men’s participation in violence was a function of a complex process of reclaiming a sense of masculine control, marked by ambiguity and contradictions, rather than a seamless support to the hegemonic Hindutva ideology. The idea of the violent Hinduised Dalit ‘foot-soldiers’ who participated in the riots of 2002 has to be questioned by locating the narratives of their participation in violence within a larger context of de-industrialisation in the city and the anxiety they experienced about their place in the city. It is crucial to bring the city and their geographical location within the frame of this analysis. The emasculation that the city made these young men feel forced them to displace some of the powerlessness the city made them feel on to instances of violence.

My research also indicated that Dalit men who participated in the violence were remorseful and were aware that the Hindu Nationalist forces had used them. However, in the light of the continuing strength of the mass base of Hindutva in Gujarat, I find it worth investigating why this remorse has not converted into political action or resentment against the Hindutva forces. My visit to Ahmedabad later in 2014 provided some rudimentary clues to understanding this conundrum.

In 2014, I spent a summer in Gujarat writing up research that I had been conducting on the city on young Dalit men. Since I was in the city, I decided to frequent the mill district to try to interview he ‘foot-soldiers’ that were recruited into the killings of 2002. On arrival at the local office of a theatre activist, my conversation with the young men was hijacked by a Dalit man in his mid-30s. Later the rest of the young men told me that he was a “gone case” – his breath stank, the skin on his face was peeling off, his hands were shaking, and he kept interrupting our conversation. I was told that I had not met him during my earlier visits because he had been sectioned under 302 and 307 for rioting, arson, and attempted murder. He shared stories about how only upper caste men in the prison system were allowed to get food from home, while the lower castes had to eat what was provided inside. He was also unhappy that the promise that Hindutva forces made about protecting them if they were arrested was not kept and his family had to find the money to bail him out. According to him, the BJP enjoyed 90 percent of support in the area and alcohol trade played a big role in it.

While the young man could not explain how BJP had mustered so much support in this predominantly Dalit neighbourhood/ area, he was convinced that it was linked to the control of the liquor and gambling business in the area. He explained that there were 46 addas (liquor dens) in the area, which were owned and run by non-Dalits. These addas had partnerships with top police officers of the city and these spaces have played a big role in swaying public opinion. Historically the business was owned by Muslims and one had heard stories of how the bootlegger turned don of the area had monopolized the alcohol business in the city. His subsequent killing in an encounter meant that the business was taken over by the Rathods and Rajputs, and the wiping out of all possibilities of opposition to the BJP in this area. It was these ‘addas’ that had incapacitated the men from the area by making alcohol readily available without the fear of being arrested and pumping money into the ‘satta’ gambling trade. The young man further clarified that “every second house has one person that is addicted to it. It is a big game that these men are playing and they have succeeded at it. Use them during the riots and when you have no use, keep them off the streets by keeping them busy in these places. These young people don’t realise what they are doing. I know that I am trapped too and don’t have a way out.” This conversation though not unfamiliar added a new dimension to my analysis by helping me understand why remorse was not turning into political action, and might provide further clues in understanding the place of Dalit men in Ahmedabad’s complex landscape marked by Hindutva based violence and de-industrialisation.

[i] All names of the respondents have been changed.

Bio:
Rubina Jasani is a Lecturer in Humanitarianism and Conflict Response at the University of Manchester. She has conducted ethnographic research on violence and anthropology of suffering in Gujarat post 2002 riots.

Tags: Masculinity, Urban India, Youth in India
From: Issue 1/ Beyond Mumbai, 2012
← Duped by the God-Trick: How feminism changed the way I look at body-image research
Narrating Men, Narrating the City: An interview with Kanu Behl →
No comments yet