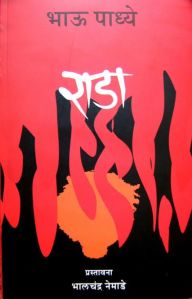 Prabhakar Padhye, recognised popularly in the realm of Marathi literature as Bhau Padhye, has been acknowledged (although rather belatedly) as one of the finest Marathi writers of the city. Born in 1926, Bhau Padhye had a chequered career including being a labour union organiser, a high school teacher, and journalist for several Marathi periodicals including, Hind Mazdoor, Navaa Kaal, Nava Shakti in the mid-20th century.[i] Between 1960 and 1986, he published prolifically, including several novels, short story collections, and non-fiction. Bhau Padhye’s work has enjoyed a revival of sorts in Maharashtra in the last decade, as newer editions of several of his novels are now being published giving younger readers access to his work from the 1960s and 70s. Although by no means a review of his oeuvre, this essay is an attempt to introduce Padhye specifically as a chronicler of men in the city (and as shaped by the city) by presenting a few vignettes from his writings.

Padhye started writing at a time when Marathi literature was saturated with apolitical, embellished prose, limiting its canvass to tender, idealised portrayals of life. These portrayals were shot through with a hint of realism, just enough for its middle class consumers to find the former palatable to their bourgeois sensibilities.[ii] In sharp contrast to this, Padhye’s characters and lives are palpably “un-pretty” and do not conform to the niceties of middle class emotional and linguistic hygiene. It is not surprising that the hallmark of Padhye’s writing continues to be most frequently identified as “ashleel” (obscene) amongst middle class reading constituencies in Maharashtra today.

Moreover, Padhye’s writing reflects a strong, unmistakable sense of place, given that all his stories were set in the unforgiving ethos which characterised Bombay of the 1960s and 70s. For me, Padhye is a chronicler of the city par excellence, not just because of his unflinching descriptions of the city’s underbelly: thus gullies, chawls, naakas (nukkads), factory compounds, Shiv Sena shakhas and liquor and gambling dens which his characters inhabited, were intrinsic to the plot of his stories. However, what imbues these narratives with depth is the insight with which Padhye portrays these narratives and characters as a product of the contradictions arising out of their gendered and classed dimensions heightened in the space of the metropolis. The young, working class men who feature prominently in his stories as “loafer,”  “punters,” “shakha waale” (reference to RSS cadre), “out lainiche” (literally meaning those who have strayed outside the line), “owalun takleli mula” (boys abandoned by fate) or “laal bhai” (communist union organisers) are located precisely on this fault line of the urban experience.

Take, for instance, Padhye’s characters from Vasunaaka, a collection of short stories revolving around a gang of young men and their lives on the street corner of Walpakhadi, a fictional working class neighborhood of Bombay, first published in 1965. The content of this collection evoked outraged demands of banning the book on the grounds of obscenity, by then stalwarts of Marathi literature, like Pralhad Atre. This is how Pokya, the chief narrator and a member of the gang, introduces his gang in the introductory story of the collection titled, “Ishq”:

Once the sun went down, our ‘company’ used to don woolen pants and gather at Vasunaaka, to goof around. There was nothing else to do. We did not have the physique for cricket, nor were we Brahmins, to follow marching orders in the RSS. These days a lot of good-looking girls come for SSC coaching classes. We could flirt with them, but then no one except for me, could manage to go up to SSC. Who can manage to stick around in school? What’s the point of it anyway? One works in an office and eventually stiches woolen pants. Is it ever possible for us to hook up with a flame like Madhubala? Our lives will have some hope only if we were to rob a fuckin’ bank like they do in ‘Highway 301’. Anyway, till then one will just have to goof around and seek comfort in baiting one of the ordinary chics from Walpakhadi itself[iii].

I read in Pokya’s introduction to his gang an acute suggestion of being trapped: in the restricted trajectory of Walpakhadi and its “ordinary chics”, woolen pants, and a regular job. On the other side of this boundary lies the aspirational world of cricket; Pokya’s wry admission of their lack of physique establishes their underprivileged class position. While Pokya also admits to the absence of the cultural capital of being a Brahmin, his remark about the RSS is laced with an unequivocal sense of contempt for those Brahmins who follow orders in this organization.

Madhubala represents the other constituent of the young men’s worlds of desire, a gendered manifestation of the unattainability of approval and value from the powerful class. Unable to find a sense of purpose in school education, but simultaneously hankering for the world outside Walpakhadi, something as extreme (and probably impossible) as a highway robbery, seems to be the only possibility for the young men in pursuit of their fantasies.

Vasunaaka follows the exploits of Pokya and his gang in Walpakhadi, saturated by a shocking level of misogyny, reflected in their language, their forced sexual liaisons, and their intensely objectifying gaze towards the women of their neighborhood. Vasunaaka is a tour de force through the world of subaltern men in the city, as they negotiate their lives on the edge of extreme sexual violence, “immoral” activities (like gambling and buying sex) on the one hand, and small time employment, a moral imperative to protect their neighborhood and a highly localized sense of control materialized in Walpakhadi’s tea shops and its iconic street corner, Vasunaaka, on the other. A large aspect of establishing this sense of control is contingent upon their “taming” and controlling women in Walpakhadi, reflected in their violently objectifying language and behaviour towards the former. In a disturbingly vivid scene in another story titled, “Saamna”, Pokya describes how his “company” taught a local “chic” a lesson for her to remember. Her fault: she had started acting too smart and had actually started complaining to police about being harassed by Pokya’s gang. Pokya describes an evening when they all went to Shivaji Park to see film heroes and heroines shooting there.

Kesharvadi had come with a lover, wearing Punjabi dress. Of course, she looked like a poor man’s Saira Banu. But Kesharwadi was on fire. She was sure to attract attention to herself through her clothes or make up. Sometimes she will wear “narrow bottom” like Christian girls do and sometimes show off her “body” (bra) like those Sindhi girls. Why will the public not go wild then? Crowds mean opportunity for the public. And we always were on the lookout for an opportunity. We suddenly surrounded her and jostled with her. Once she was separated from her lover, we dragged her to the gym room in the corner and then groped her all we wanted.[iv]

Vasunaaka is replete with many more such instances, relayed by Pokya with utter nonchalance. However, any encounter of Pokya and his gang with “educated” and “graduate” characters in their lives in Vasunaaka stands out, for the sense of reverence with which they approach these characters, bordering on obsequious behaviour. The opening up of sudden vulnerabilities in the face of education/class power is also echoed in Padhye’s later novel, Raada, published in 1975, which was also sought to be banned by Shiv Sena in its early days.

Raada tells the story of Mandar, a young rebel without a cause, caught in the crossfire between his Marathi businessman father, Sadanand Sheth and the rising clout of young Shiv Sena workers in the 1970s. Raada is probably the only literary work in Marathi which documents in ethnographic detail the ways in which Shiv Sena captured the material spaces of Bombay, galli by galli, shakha by shakha, through violent, opportunistic tactics. In a brilliant scene in the book, Annasaheb Kharkar, the aspiring leader of Shiv Sena shakha in Goregaon visits Sadanand Sheth in the latter’s office, along with the bevy of his goons.

After promising Sadanand Sheth to protect his rebellious son from any bad publicity in the neighbourhood, the Shiv Sainiks are treated to a scrumptious spread of “chivda” samosa, cakes, wafers and Goldspot in the adjoining room. After demolishing the spread, Fantya, one of the shakha goons claims, “We should thank Mandar. Otherwise who will give us so much respect (izzat)? We are the fuckin’ dregs of this city. Balasaheb started Shiv Sena so now we have at least something to hold on to.” As they are leaving the office, Sadanand Sheth’s secretary hands to each one of them a plastic bucket wrapped in paper. The boys are thrilled. Nanasaheb Kharkar explains righteously, “Plastic bucket…costs seventeen rupees. That’s what Sheth has given us. It is a gift. Memento…that’s what it’s called in English.”[v]

This scene struck me as remarkable: brash young men seeking dignity in the presence of the wealthy, feeling gratified even in a hint of recognition given by the latter, their self-esteem being recovered through a plastic bucket and a treat of chivda and cakes served to them in Sadanand Sheth’s plush office, an otherwise unthinkable proposition in their messed up lives, shorn of respect. Balasaheb’s Shiv Sena seems to be the only way of redemption for these young men, as it opens up for them more and more offices like Sadanand Sheth to reclaim their sense of respect.

As Padhye’s male characters go through such similar episodes, their violence starts seeming less an essentialized characteristic of their maleness or their subaltern identity, and more about establishing control in a context where none exists. These moments of uncertainty and vulnerability do not appear very frequently in Padhye’s narratives, but he inserts them frequently enough to disturb the seamless image of the “violent mawali”. Padhye’s problematizing of the figure of the “mawali” in the 70s speaks to contemporary discussions on gendered violence in urban India, which often veer towards a dangerous equation of working class/low caste men as endangering middle class women’s respectability and access to the city’s spaces. In providing young men like Pokya and Fantya the space to be vulnerable, Padhye’s writing pushed (and continues to push) against a flattened understanding of subaltern young men which blames them as violent and makes them the scapegoat of their own marginalisation.

Another crucial way in which Padhye broke away from the established literary order of his times was through his unapologetic use of everyday language of the city. Padhye’s language not just reflected the city’s ethnic diversity but also an ethos of a city continually turning against itself in its stark inequalities. In making the street language of Bombay as the identifying hallmark of his writing, Padhye boldly moved grimy subaltern lives of the metropolis into the corridors of libraries overwhelmingly stocked with genteel Brahminical literature and life worlds, according the former the dignity of being considered as literature.

Tags: Masculinity, Urban India, Youth in India
From: Issue 1/ Beyond Mumbai, 2012
← Contents – Punjab: Marginal and Central (Issue 34)
Duped by the God-Trick: How feminism changed the way I look at body-image research →
No comments yet