Punjab, the backyard of Chandigarh

At the age of seventy-two, Surjit Singh (name changed), living in a village not far from the Pakistan border, continues to be agile and active. Right now, however, he is devastated. He has just received a phone call from the clerk in the Sub-Divisional Officer’s office at Ajnala that the high-tension wires that were supposed to pass over his neighbour’s fields will now cross above his, since his neighbours have managed to bribe the officer.

Surjit Singh was in the process of negotiating sale of his five acres to sustain the treatment of his drug addict son, who had developed Hepatitis-C. This was a consequence of injecting heroin in the company of his friends in Amritsar, where he had gone to study for a diploma in hotel administration. The diploma would have furthered his chances of a visa to Australia or so the travel agent had said. Nothing slashed the sale value of a field like high tension cables passing over it. In the clerk’s opinion, only the minister in Chandigarh could help. Surjit Singh had never been to Chandigarh, which was at the other end of Punjab. Nor had any of his friends. From his village to Amritsar, it took two hours and a change of buses to reach Chandigarh. Even if he did manage to procure a recommendation from the village sarpanch for the MLA requesting him to in turn write a letter to the minister, the trip would take three days. The only train to Chandigarh left Amritsar in the early morning. Surjit Singh was wary of staying in a guest house in a strange city, even if he managed to find one. He had heard that the police there were particularly suspicious of villagers from border areas.

Dr. Rajveer Sandhu (name changed) swerved his Maruti Swift just in time to avoid being hit by a truck hurtling away on his right. The car was soon covered with swirling dust, a by-product of the road being widened – a work in progress for ten years. For once, he was not amused by the handwritten sign, ‘Pleese Beer Tempary Pain for Permanand Pleasure’. He looked forward to a shower and a hot meal at his home in Gurdaspur, which he had left the previous morning to attend a meeting of senior medical officers with the Health Minister in Chandigarh. Half an hour into the meeting, the minister had been called away by the Chief Minister and the rest of the meeting had been postponed – first to the afternoon and then to an indefinite future date. As his car entered his dusty hometown, his phone rang. It was the assistant to Minister’s PA. The minister desired to resume the interrupted meeting next morning at nine. He cursed and turned into a bye-lane to reverse his car for a six-hour return journey to Chandigarh. His driving license had been given for renewal and the Chandigarh police had already given him a tough time over this in the last two days. 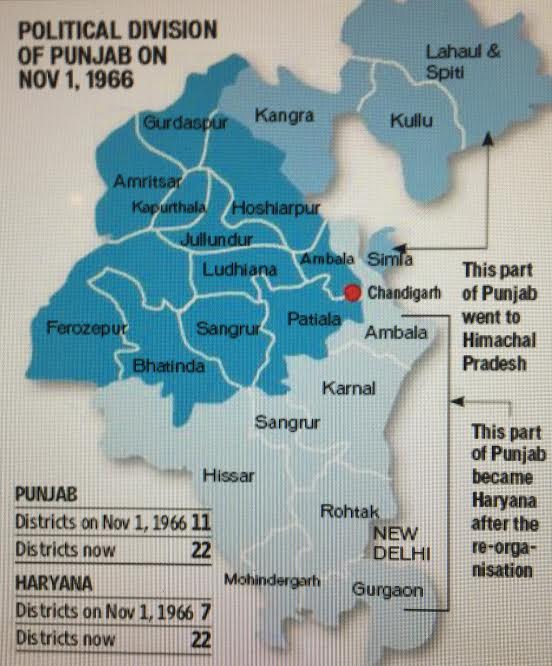 The Partition of India in 1947 had seen the large landmass of the north Indian state of Punjab carved into two. The bigger chunk was handed over to Pakistan and the rest, which had several princely states embedded in it, became the Indian Punjab. This contained the future states of Haryana and Himachal Pradesh.

Shimla was the capital of Punjab till 1960, when Chandigarh, the first successful experiment in urban planning in independent India, came into being and became the capital of Punjab. Location was primarily decided upon by the fact that it was central to the then state of Punjab, which extended from Lahaul-Spiti in the north of the state bordering Ladakh to the areas bordering Delhi in the south.

However, six years after Chandigarh was operationalised, it was time for a further division of Punjab, this time along linguistic lines. Large swathes of the Shimla Hills, Kangra, Kullu and parts of Gurdaspur and Hoshiarpur districts were transferred to Himachal Pradesh and what was south Punjab became the new Hindi-speaking state of Haryana. Chandigarh itself was taken out of Punjab and made into a Union Territory under the central government. In what was a freak ad hoc measure, both Punjab and Haryana were allowed to use the city as their temporary capital, ostensibly as guests till alternative arrangements were made. Fifty years later, the ‘temporary’ measure continues except that nobody now talks of it as being temporary.

There is nothing unusual about a state capital being located in a corner of state. However in a country like India with long distance travel from remote towns and village being an expensive and time consuming affair, it is certainly far from desirable. In any case, the seat of the state government being outside the state under another government is an oddity and leads to unique problems. A farmer from Punjab walking on the wide avenues of Chandigarh sticks out as much as a sore thumb as he would in Europe. While farmers feel quite at home, even jaunty in their tractor-trolleys in all other cities of the state, Chandigarh does not even allow tractors in. The central government-controlled administration there runs a tight ship and is particularly wary of villagers from Punjab reaching in ones and twos and then once in a while coalescing into a protest against their state leaders who live there.

Politicians, for some years, at least before the elections, made faint noises about the need for transferring Chandigarh to Punjab. They quietened down quickly as both the politicians and bureaucrats governing the state realised the huge advantage of living as VIP guests in a modern city without the headache of having to actually govern it. Chandigarh has some of the best educational and health care facilities in the country. It also has a modern airport and three Shatabdi Expresses to Delhi in a day in addition to a slew of fast trains to rest of India. Ironically, till very recently Chandigarh had no rail connection to Punjab.

That their offices and houses are not in Punjab is actually a cosy arrangement for those at the helm of the government. It is quite another thing that the worst problems that the state has faced over the years, be it wars, terrorism, drug addiction, agrarian crisis or disproportionate cancer deaths, had their epicentre at the far end of the state while they, the solution were at this end. In fact, during the eighties, when a savage terrorist movement engulfed Punjab, Chandigarh was relatively a safe cocoon.

Today, even during periods of farmers’ protests, which are quite regular in Punjab, the politicians and senior officers stay put in Chandigarh going about their work and life normally. It is the people of Punjab who bear the brunt of road and rail blockades. The Chandigarh police is quick to put up barricades every time a Punjab protest grows big. During a recent farmers’ agitation, the government of Punjab did not go to Punjab for days and the protesters who wanted to meet the ministers were pushed back from the border by the central police.

Since ministers and officials do not live in Punjab, it makes them that much less of stake-holders in improving day-to-day issues of living – be it traffic, health care, children’s education, pollution or power cuts. It is no surprise that almost none of the senior politicians or officials have settled down in Punjab after retirement in the last fifty years.

And it is not just the politicians or the officialdom. The higher judiciary has been equally culpable of getting too comfy in the City Beautiful (a popular epithet for Chandigarh in local English newspapers). Section 36 of The Punjab Re-organisation Act, 1966, did mention the setting up of benches of the Punjab and Haryana High Court in cities of Punjab and Haryana but in the last fifty years nobody from the judicial side has shown any interest in implementing the provision.

Five decades of this anomalous arrangement has already impacted adversely the lives of several generations. Being a border state, Punjab has attracted minimal industrial investment. A decade and more of terrorism took its own toll. The last twenty years have seen a few information technology and health-care majors set up shop. However, business men like to be near the seat of power and these ventures have clustered in Mohali which is known less as a city of Punjab than as a suburb of Chandigarh.

The people of Haryana on the other hand have little reason to complain since southern Haryana surrounds Delhi on three sides and as a result is a thriving industrial and commercial hub. It is also the main reason why Haryana has rapidly surpassed Punjab in revenue generation, employment opportunities, and per capita income.

It would be wrong to blame one or the other political party for being happy and willing in letting the freak arrangement continue. Politicians like their creature comforts. If the option is between living in Punjab and visiting Punjab on the weekends, they will always choose the weekends. Both the principal political parties which have ruled Punjab in the last fifty years are equally responsible, and it is highly doubtful that if a third political entity comes to power, even they would look at the issue as a problem.

For a political party, planning another capital for the state would always suffer from a serious handicap. While a new capital takes long to come up, politicians elected to power cannot see beyond five years. Any project which is not going to be completed before the next election is not politically cost-effective. Long-term visionary planning has long been passé in India. And having a low cost, functional administrative headquarters somewhere in the middle of Punjab sans the trappings is ego crushing. Politicians of Punjab may not even know that the capital of the New York state is not the glossy New York City in one corner, but a small town called Albany in the middle of the large state. And so while this unique experiment failed years back as far as the people of Punjab are concerned, the denial is going to go on for ever, since it is too inconvenient to even think of an alternative.

Bio:
Anirudh Kala is a psychiatrist based in Ludhiana. He was a member of an expert group which recently drafted the Mental Health Policy of India. A weekend scribbler, his anthology of short stories, Partitioning of Madness, is being published by Speaking Tiger.

Tags: Punjab, Punjab Politics, Punjab Society
From: Issue 1/ Beyond Mumbai, 2012
← Ki Banu Duniya Da? – What Will Happen To The World?
From ‘Punjab University, Lahore’ to ‘Panjab University, Chandigarh’: A Difficult Journey →
No comments yet