My First Brush with Urdu Journalism 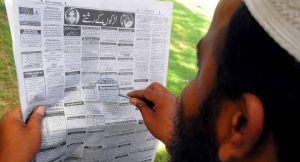 Working for an Urdu paper after getting a master’s degree in mass communication from Banaras Hindu University (BHU) is not the usual course that students go for. It is like landing in a cul-de-sac, for good! Given hegemony of the English language on minds of people in our part of the world, their step-motherly attitude towards the vernacular press is observable at the first sight. When it comes to Urdu, more specifically, mum is the word!

The Urdu press, by and large, is a Muslim press. Over time, Urdu has become the language of Muslims and thus the Urdu press has also got itself confined to the Muslim community. Hasan Kazmi’s couplet captures this sorry state of affairs of the Urdu press in India, which is in my opinion, not different from the state of the community.

[Everyone keeps dear to me, I don’t belong to anyone
Like Urdu, I am also living in the country]

I joined the Azizul Hind Urdu in June 2013. Since I could not get a job in the ‘mainstream’ media houses, I was desperately looking for a job. This desperation was because I wanted to add a feather to my cap as a journalist and I wanted to get a knack of journalism. Finally, I got an opportunity in the Azizul Hind. In fact, I was selected for the Hindi version of this paper, which was about to launch in a month or so. Because of some technical reasons, this could not take off.

There were a few vacancies open for the Urdu section of the paper too. And they wanted someone who could write editorials and articles in the Urdu language. Being born and brought up in an Urdu environment, I can easily articulate in this language. Therefore, it was a done deal.

While working in the paper, I often encountered a few questions by well-meaning colleagues there. They would humbly ask: ‘Why are you working in an Urdu paper?’ And then they would usually advise me, ‘You have got a world of opportunities out there, go and explore it’. ‘Get the hell out of here,’ I would often hear! Given the uncertain times we are living in, it was really difficult for me to explain and defend my work there. I remained there till the newspaper finally closed down after running for almost two years.

I was assigned the task of writing editorials and searching materials for special articles! The editor also used to take my help to find research materials for writing special pieces. I got space on its editorial team soon and started writing editorials. For almost two years, I stayed there despite getting a low salary. Of all the people in the newspaper, I was the only one with formal training in journalism. My colleagues had no training in this craft, and a few were from madrasas.

The Azizul Hind was launched by a popular Urdu journalist, Aziz Burney, who was the founding editor of Roznama Rashtriya Sahara, an Urdu daily. The impression of Burney sahab on my mind was that of a crusader, who had been fighting on behalf of the community through his writing with the outside world. Truth to tell, I felt a sense of satisfaction working with him.

It dawned on me quite early that the policy of the newspaper was pro-Muslim. The paper used to have a tagline: alam-e-Islam ka tarjuman [the spokesperson of the Muslim World]. Hardly any Urdu newspaper claims such a monopoly. We know that post-Partition Urdu has been turned into the language of Indian Muslims. This is how it is accepted by Muslims and non-Muslims alike. Generally, the Urdu newspapers cover the Muslim community-related news. However, Azizul Hind surpassed all other newspapers as it carried every bit of information from the vantage point of the Muslim Community from cover to cover. And it had openly declared that the paper was committed to the cause of Muslims only. There were special pages dedicated to the issues of the Muslim world. The reading constituency of the paper constituted people from madrasas, khankah (hospices), and Urdu-knowing people from within the community. In hindsight, it could be said that the contents of the paper was meant for the consumption of a particular constituency, where the mainstream media is yet to make inroads.

The Azizul Hind flirted with the idea of launching a parallel Hindi edition for readers who could not read the script. In the beginning, the paper had tried to launch a separate edition but failed to do so owing to paucity of workforce and technical incapability. Moreover, the paper could also not afford good reporters and stringers in both the languages. However, it came up with a bi-lingual version of the same for a brief period of time.

My task was translating news and stories from the English and Hindi newspapers into Urdu. This experiment was doomed to fail from the start. The translation was of poor quality given the lack of professionals. The Urdu journalism borrows heavily from the English print media and some other sources. Azizul Hind was not an exception to it.

The target audience, that is, the Muslim community, was always taken into account for writing any piece of information. Consequently, the reports and stories were rather subjective. During the communally charged environment, it gets tough even for a journalist to write in an objective way. It was also very difficult for us to write in an objective and balanced manner. Though I tried to resist and speak my mind, the gate-keepers used to have the last say. I was part of the paper when the infamous Muzaffarnagar riots and the 2014 Parliamentary Election had taken place.

Financial constraint of a particular newspaper also forces it to become politically biased. Urdu journalism is not a financially independent enterprise as most its English counterparts are. It does not get advertisements from large corporate houses, given the low circulation of Urdu dailies and poor purchasing power of the community. Therefore, the Urdu newspapers are mostly dependent for their survival on aids and advertisements from political parties. The political inclination of the owner/editor of a paper decides the political party from which it gets funds. These factors certainly go into making of choices in selecting news items and stories. It was true for Azizul Hind, too.

Sometimes I was given the task of doing stories related to the political party that was backing the newspaper then. I had to do those stories going against my own volition. The journalists were not in a position to challenge the editor and his policy. Low salary as well as the policy of hire and fire makes these journalists a vulnerable tribe. The freedom in the Urdu press is somewhat less than in the English and Hindi press. Urdu newspapers appear to be the mouthpieces of their political parties at the last sight. There is almost no scope for journalists to exercise freedom and speak their mind.

I also came across the practice of lifafa journalism. This particular term is used for bribing news reporters for getting the coverage of one’s choice. Azizul Hind could not pay enough to its reporters and stringers for their hard work. The paper could not stop this practice given its financial constraints. Though it is a wrong practice in journalism, it cannot be curbed for sure.

Azizul Hind projected itself as the spokesperson of the Muslim Community. However, it never bothered to cover socio-economic issues that concern the community. Stories on such issues were few and far between. The Staff were never encouraged to write on issues of employment, health, education, etc. Even on my insistence, I was not given to cover issues that I wanted to. Identity related issues were dearer to Azizul Hind.

After working for almost two years in the Azizul Hind, I had to say goodbye to journalism. I taught in a college for some time, and later got myself enrolled in a doctoral programme.

Tags: Indian Muslims, Urdu, Urdu in India
From: Issue 1/ Beyond Mumbai, 2012
← Growing up with Urdu
What does the slogan say? Violence, Language, and Kashmir →
No comments yet