The Conflict, The Crisis, and the Kashmiri Youth 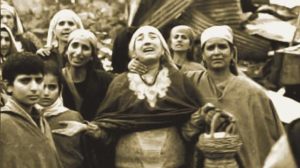 As part of my research work, I had a brief email correspondence with two Kashmiri students last year. Their short replies, I think, afford a glimpse of sorts in understanding those sublime aspects and implications of political uprisings which tend to remain obscured, or be taken for granted. I know just two anecdotes cannot be basis for generalization, but they seem to point to a broader phenomena, which may allow us to understand some of the aspects of the youth activism in the Indian-controlled Kashmir. The messages are produced verbatim here:

…just before 2016 unrest, I was alien to all the dirty kitchen politics and their executors, the freedom movement, the history of my nation, article 370, AFSPA, and so on. It so happened in these few months that I underwent such a psychological transformation that I seem to be more interested in the movement rather than science. (A female postgrad science student from Srinagar)

I am a 17-year-old. Although I have not seen the militancy era of Kashmir during the 90s but I’ve been witness to events like 2008, 2010, and the recent turmoil in 2016 in Kashmir. Like most of other Kashmiri kids, I became interested in words like ‘Freedom’….’Azadi’… ‘Pakistan’ ‘conflict’…etc. from my childhood. I first started writing when I was about 13 years old.   (A male teenage student from Srinagar)

When I read the first email for the first time I thought: here is a young Kashmiri reflecting on and, succinctly articulating, the state of affairs in her homeland. But as I came back to the message later, I realized that it says more. It does not just merely express peculiarities of the Kashmiri politics from a particular individual’s point of view, but it also talks about “a psychological transformation.”

And this concept of psychological transformation is an important one in case of Kashmir. It provides a potential clue about how a person turns into an active participant from being a passive bystander. Of course, this ‘active’ here does not mean political action on the streets but becoming conscious about the conflict, relating with it, and ultimately taking and articulating a position vis-a-vis the conflict.

The second email manifests a conflict narrative, which has its distinct vocabulary and lexicon. This narrative derives as much from the lived experiences of the military occupation as from the culture which enables this narrative.

In the remaining part of this short essay, I will first briefly discuss the idea of passivity in a military occupation, and then I will talk about the narrative culture, which a generation produces in the unique circumstances of its traumatic experience.

Passivity in a Context

When the female student (quoted above) talked about her psychological transformation, we can assume that there was a period of her political passiveness (conscious, cultivated, unconscious?) prior to the 2016 uprising. This preceding period of passivity can be analysed by borrowing the concept of crisis as context from the political anthropologist, Henrik Vigh (2008), who states: “We need to depart from our regular understanding of crisis and trauma as momentary and particularized phenomena and move toward an understanding of critical states as pervasive contexts rather than singular events.”

When a difficult situation (e.g., war, military occupation) perpetuates and normalises itself in a place over a time, it tends to make people, who live under its shadows, adapt to it (some get co-opted). However, that does not mean resistance against such condition terminates itself indefinitely. Adaptation under hard and chronic conditions can be seen as a strategic and pragmatic response imposed by mundane necessities of human survival. Since the crisis state is chronic, such a world is not characterised by order and balance but chaos and disorder, which has come to become ordered.

For at least last two generations of Kashmiris, the massively militarised space around them with around half a million Indian troops stationed in Kashmir in thousands of camps is symptomatic of a pervasive context of crisis, where the state inflicts violence on Kashmiri body and psyche on almost daily basis. For young Kashmiris, who grew up in a condition of chronic crisis, the killings, the shootings, the arbitrary detentions, the humiliations, the protests may not seem a disruption of ‘order’ rather an order itself; these may not be aberrant shocking events in an otherwise smooth flow of things. In other words, these events represent, in Vigh’s terms, “…not a short-term explosive situation but a much more durable and persistent circumstance.” In a similar vein, Walter Benjamin writes in his essay, “Theses on the Philosophy of History” (1950): “The tradition of the oppressed teaches us that the ‘state of emergency’ in which we live is not the exception but the rule.”

From the perspective of the Kashmiri youth, their context looks like as one of constant war – because of the seeming irresolution of the Kashmir conflict and the enduring military occupation – and their own condition a state of helplessness to balance and control the exterior forces that influence and affect their possibilities and choices. This exterior force, from their perspective, manifests itself in the form of the militarized spaces, the securitised administration and policies, and the denial of autonomous politics. And, therefore, “[a]s people have to work regaining their possibilities and positions within their social environments,” two crises interact here: societal crisis and the personal crisis. This phenomenon may explain why there is a mental health crisis in the Kashmir valley, with nearly 93% percent people having “experienced conflict-related trauma.”

While some societies may take a long time to externalise their resistance, resistance does find ways to nurture itself through underground and other activities. For example, the Clandestine Press in the Vichy France of the early 1940s. James Scott calls it infrapolitics, which entails concealed, strategic forms of resistance. And in some cases, after a period of latency, resistance manifests itself, when the ‘normalised situation’ is consciously and forcefully disturbed through direct action and the essential nature of the relationship between the occupied and the occupier made evident, thereby revealing the ‘moment of clarity’. During these moments, adaptively pragmatic attitude to the ‘normalised situation’ (of military occupation) is replaced, en masse, by a more proactive resistant assertiveness.  The summer uprisings of 2008, 2010, and 2016 in the Indian-controlled Kashmir can be regarded as those moments of clarity in which the essentially forced relationship between India and Kashmir manifested itself.

The generation that experiences the moments of clarity potentially also produces a unique culture because many of them might internalise the consciousness related to the traumatic event. In Edmunds and Turner’s (2002) conceptualisation, “a generation can be defined in terms of a collective response to a traumatic event or catastrophe that unites a particular cohort of individuals into a self-conscious age stratum.”[1] It is traumatic events (wars, conflicts, economic downturns, etc.) that produce a profound effect on a generation’s consciousness and self-identity. The experiences of trauma are internalized and get sublimated into a unique set of values, interests, and political activities, separating one generation from another generation’s past and becoming “the basis of a collective ideology and a set of integrating rituals.”[2]

Here one can find echoes of Pennebaker and Banasik (1997), who argued that not all historical events register themselves in collective memory of people but only those events that significantly impact the course of people’s lives in long term and bring major institutional changes. They also postulated that national events of significance have much more impact on people of a certain age group (between 12 and 25). But in temporal proximity of the event, the affected generation tends to keep a distance from commemorating it, because coming to terms with the event itself takes away much of time and energy, and also lack of resources (financial, social, and political) does not allow it. I think in the present age, this latter aspect (of commemoration) has changed as social media has become part of the social fabric affording easy and cheaper ways to document and remember.

Though significant traumatic events like uprisings do not occur frequently, but political resistance through formal and informal networks, general strikes – in the last 27 years, from 1990 to 2016, hartal [general strike] has been observed over 2000 times against many events and incidents – curfews, state-imposed restrictions and other aspects of the military occupation, in general, effects a persistent traumatic condition in which not only this narrative culture reinforces itself but also the self-identity of the youth which gets shaped in the process. Though identities (ethnic, gender, class, vocational, etc.) are fluid which can potentially revise over time among the young adults, traumatic events or moments of clarity may accentuate a core identity.

Ultimately, what I tried to point at with the aid of two illustrative quotes above is that pervasive context of crisis affects the possibilities and choices of the youth and their expectations, convictions, desires, anxieties and fears, reflected not only in the political action (like street protests and stone pelting) but also in the narratives and accounts that they produce in response to this context of chronic crisis, which also shapes their self-identity. In the event of a significant political tumult (like uprisings), pragmatic adaptation to the conflict and the concomitant psychological detachment from its politics seem to get ruptured among some passive bystanders, who eventually become manifestly political.

Bio:
Muhammad Tahir is a PhD scholar at the School of Law and Government at Dublin City University, Ireland.

Tags: Azaadi, Kashmir, Kashmir Uprisings 2016
From: Issue 1/ Beyond Mumbai, 2012
← “Inside Out”: Autobiography, History, and the Comic Form in Malik Sajad’s Munnu: A Boy from Kashmir
Everyday Resistance: An Overview of 2016 Uprising in Kashmir →
No comments yet