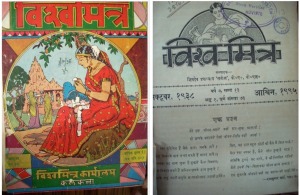 In the standard historical accounts of Hindi journalism, the subject of international politics appears to be a missing theme. On the contrary, as this photo essay will suggest, many Hindi literary journals covered international affairs on a regular basis, albeit depth of coverage varied from one periodical to another. While one finds small news items and columns from the late nineteenth century itself, from the beginning of the World War I the coverage of international affairs becomes a regular feature.

Vishvamitra and the international politics

In this essay, I have selected some cartoons, featuring Hitler and his Nazi Germany, which were reproduced from different international magazines in Vishvamitra (1933), a Hindi literary-political monthly, published from Calcutta. Literally, it means friend of the world. The journal’s circulation figure was around 2,500. Vishvamitra, in comparison with other contemporary Hindi literary journals, devoted more number of pages to cover international politics. This is perhaps reflected in the visual of the first page, where a young [Hindu] man is holding and looking at the globe.

Generally, the standpoint of looking at world politics remained that of a colonial subject, who is a keen but distanced observer of the imperialist power game. Interestingly, Vishvamitra uses the reproduction of visuals, especially caricatures (already published in contemporary international magazines like New Masses, New York and L’Humanité, Paris, and at times in Modern Review, Kolkata) to underline the contradiction of world politics enmeshed in imperialist power struggle. Unlike the reports on international affairs, the cartoons took a more critical stance. They foregrounded the opportunistic and unethical nature of political alignments, highlighted the imperialist rivalry and violence.

A qualifier will be in order here. This is a research work in progress. While we do not know the context of production and circulation in the magazines wherein they were published originally, it is safe to assume that the reproduced caricatures in the new and radically different local context of Hindi public sphere may have had conveyed altered meanings. Following reading is based primarily on the latter context.

Hitler in the Hindi public sphere

Hitler was viewed as one of the many dictators with rabid imperialist ambitions; dictators, who might have been against Britain, by extension British Empire, but had nothing good to offer to victims of imperial exploitation like Indians.

Cartoon 1: Vishwamitra, March 1935. Caption: Dictators of all countries are wearing shirts of one or the other color, but Gandhi has none. 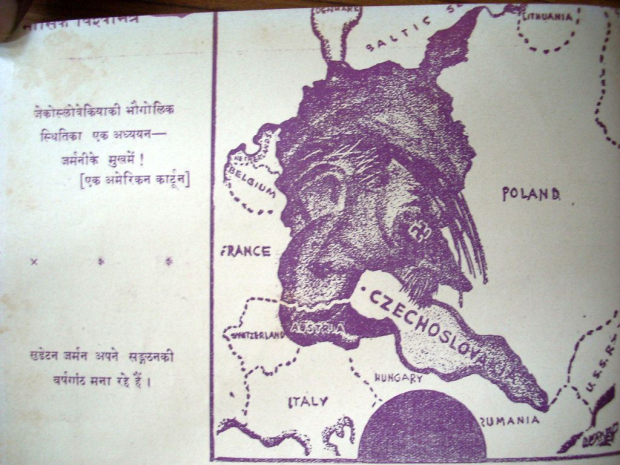 Cartoon 2: Vishvamitra, March 1938. Caption: A geographical study of Czechoslovakia in the mouth of Germany, An American cartoon.

Cartoon 1 is a good example in this regard. It shows a black half-naked short old emaciated man as Mahatma Gandhi, who is sitting in one corner isolated from a group of booted dictators wearing different (ideological) uniforms. They are looking down upon Gandhi with a mixture of frown and contempt.[1]

Cartoon 3 shows (young) Hitler playing with the map of Europe. He is cutting it into multiple pieces while the senior European patriarch is happily watching his destructive activities. 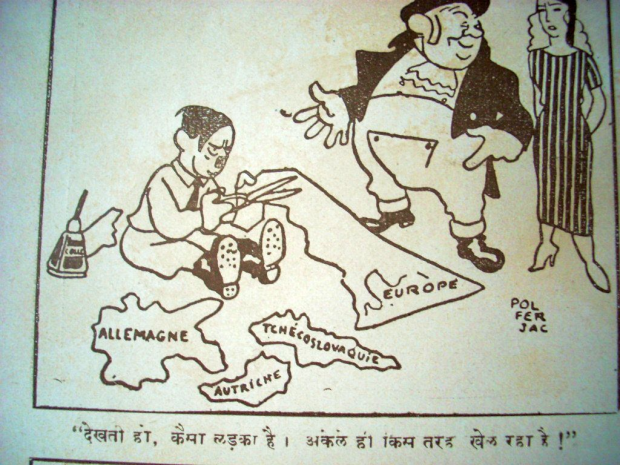 Cartoon 3: Vishvamitra, October 1938. Caption: See, how [intelligent] this boy is! How is he playing on his own!

Active complicity of world powers in pampering the Nazis by various world powers like Britain and its Prime Minister Chamberlain is vividly articulated in some of the cartoons.

Cartoon 4 shows the murder of Czechoslovakia at the hands of Hitler. Hitler is depicted as hanging Czechoslovakia to death by using the tail of a lion representing Britain. 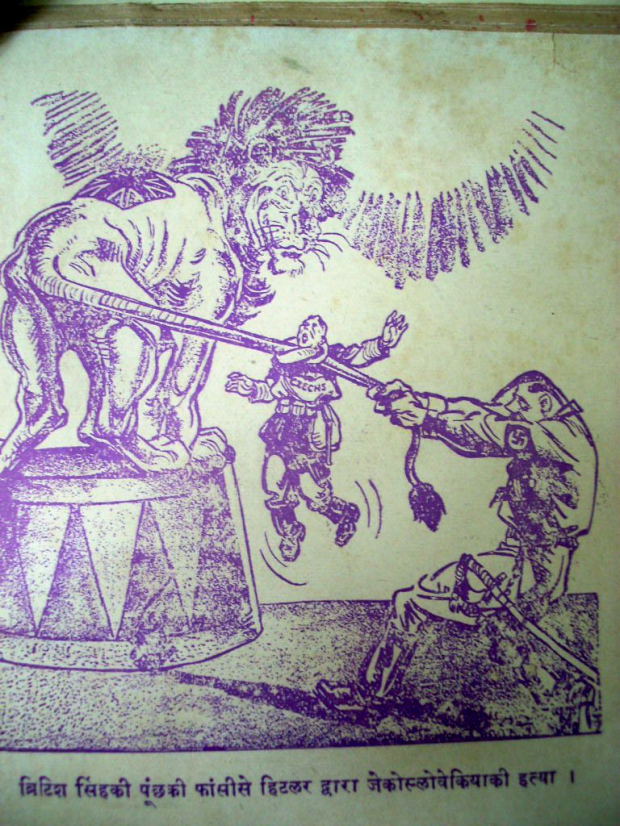 Likewise, Hindi caption of the Cartoon 5, drawn by famous French cartoonist J. Sennep, describes the visual as Hitler doing nigger dance at the tune of Chamberlain. Hitler is depicted as an African native (who is painted black and dressed like a tribal). He is standing with a pierce in his hand looking at an emaciated man with a long (possibly Jewish nose) who is standing with a (paint) container and a brush in his hand. The map of Africa is hanging in the background. The British Prime minister, Chamberlain, is sitting at his feet scrubbing and wiping Hitler’s bottom. He is holding a scrubber and wiping cloth like hand cymbals.

While Hitler and the violence of Nazi Imperialism in Africa is referred explicitly in the visual and the accompanying text, the racist and possibly anti-Jewish subtext of this cartoon, quite vivid to its present reader informed about the contemporary times, goes uncommented in Vishvamitra.

This should not lead us to conclude that the close affiliation of the imperialist ideology in general and Nazism in particular with racism and anti-Semitism was unknown to Hindi public sphere.

Cartoon 6 (reproduced from a Marxist Parisian daily) is a brilliant satire on Hitler’s racist National Socialist ideology (and also militarist Japanese nationalism), informed by social Darwinism. Alluding to the social Darwinism and its popular slogan, ‘survival of the fittest’, Hitler and a Samurai (symbolizing the Japanese militarist regime) huddle together and proudly declare that their superior nationalities will turn victorious by defeating the inferior races/nations. At the same time, the race science or ethnology that informed their ideology is made to appear ridiculous in the cartoon. They are shown to be referring to the evolutionary theory of biology, suggested by a gorilla in the frame, which makes them animals or descendants of ape rather than civilized humans.

Cartoon 6: Vishvamitra, October 1938. Caption: “With our efforts, the supreme nationality of our ancestors (according to Darwinian theory) will be victorious!” (From L’Humanité, Paris) Cartoon 7: Vishvamitra, August 1939. Caption: Roosevelt in the eyes of the Nazis

Not only the racist but also the anti-Semitic underpinnings of Nazi Germany in particular and European political climate in general are captured by the two following caricatures. Cartoon 7 illustrates how the Nazi propaganda against the US projected President Roosevelt as a Jew. In the backdrop of American flag, Roosevelt is standing on a podium of Talmud (the central text of Rabbinic Judaism). He is wearing a dress marked with the Star of David and holding menorah (a seven branch lamp stand). He is looking at a (German) man, who laughs at him.

Cartoon 8: Vishvamitra, October 1938. Caption: How do you know whether he is a Jew?”… “On the basis of his bank balance.”

Cartoon 8 is illustrative of the persecution of Jews in Nazi Germany. In the frontal frame of the cartoon, two men in uniform are chatting with each other on how to identify and mark a Jewish man. In the backdrop, a frail man with a long nose is shown as fallen on the ground and a holy cross lies beside him. In between the two frames, a portrait of a rising sun hangs from a flag, possibly bearing a Swastika mark.

This essay has taken into account only a fraction of material to provide a glimpse on the history of the reception and circulation of Hitler and Nazism in a vernacular public sphere. A rich archive of such material in Hindi can be explored to get a more layered and differentiated understanding of the nature of coverage, reception, and articulation of international politics and globally circulating ideas in general and European fascism in particular.[2]

[1] What is interesting to note in this cartoon is that Viswamitra does not underline the conspicuous resemblance of Gandhi’s iconography with another colonized population, the Africans. One can probe this issue further by tracing the source text and its immediate context: whether Gandhi was represented as such because of his South African political past or whether, in the racialized discourse of international politics, he was projected as the representative anti-imperial counter-figure against racist-supremacist imperialist leaders.

[2] There have recent works by Benjamin Zachariah, Maria Framke, Kris Manjapra, etc., focusing on the itinerant anti-colonial Indian figures and their flirting with European fascism. But they have been unable to tap into the Indian language sources, especially magazines and periodicals through which such ideas circulated amongst the wider public.

Bio:
Dr. Prabhat Kumar is an Assistant Professor in the Department of History, Presidency University, Kolkata. His research on the making of modern literary and visual narrative of satire in Hindi print (especially in the periodicals of late nineteenth century and early twentieth century) from a transcultural perspective earned him doctorate from Heidelberg University. He is a regular contributor to the Economic and Political Weekly and Kafila. He can be reached at Prabhat.His@PresiUniv.ac.in

Tags: Holocaust, India, Israel, Jews
From: Issue 1/ Beyond Mumbai, 2012
← Holocaust and Hitler in Hindi
Indian Muslim Denial of the Holocaust: Who are these Muslims? →
No comments yet