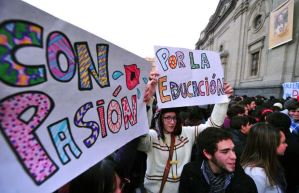 There was a time in the slowly receding past, when higher education was substantially free in most parts of the world. Students who passed difficult examinations would come to universities and study what caught their fancy. They had few worries about the cost of their education. What lay before them were years of learning.

During these years of learning, habits of democracy filtered into the lives of the students. Education might have been mostly paid from the corpus of social wealth, but other problems did interrupt their studies. Students came from many backgrounds – differentiated by class, ethnicity, and region. Inequalities of the world made their way into student lives, and it was to redress these that students became political. Politics is the confrontation between groups over the distribution of power and other resources. It is democratic to be political. Silence is the opposite of democracy.

Then, suddenly, the world changed.

A new order emerged. Higher education should no longer be free. If social goods are free, they are abused. Everything must be paid for – including education. How does one ensure that educational institutions are not merely for the rich? By giving opportunities to those who have no spare money – opportunities of scholarship and of debt.

The model for this pay-as-you-go education is the United States, where free education at the college level has always been anathema. That is why seven million Americans are currently in default over their college debt, while the total college debt in the United States is over $1 trillion. What is good for the US – namely debt – must be good for the world! Therefore, this debt-driven educational strategy finds itself promoted by international development institutions, international financial institutions, and of course capitalists who see in for-profit education an immense opportunity. Few countries have been able to hide behind the culture of social goods in these neoliberal times. Most have had to succumb to fee hikes of one kind or another as a lever to break down the idea of education as a social good.

From South Africa to the United Kingdom, students have revolted against the rise in fees. They have occupied public spaces, chanted till their throats hurt and motivated others to join them in disgust at the profit gouging of this essential aspect of a democratic society. South Africa’s students in 2015 put up immense resistance to the push for an increase of fees by over ten per cent. This was the largest student and indeed youth demonstration since the end of Apartheid in 1994. ‘Our parents were made promises in 1994,’ a student slogan went, ‘We’re just here for the refund’. Disillusionment with the direction of intensified inequality in South Africa and dashed hopes for a socialist future met the sudden rise in fees. The values of the anti-Apartheid struggle informed the students. They would not back down. The government – under immense pressure – had to rescind the policy. Five years before that, British students called for a ‘demolition’ – a demonstration against the fee hike for their university education. The National Union of Students found an ally in the Trades Union Congress – they both saw the fee hike as an attack on the working-class. Debt-induced national collapse in southern Europe was in the air in 2010. ‘Greece, France, now here too,’ went the chant. Crackdown by the police against the demonstrators was met in Parliament with a ratification of the fee hike. There were not even the shared values between students and the ruling class as there is in South Africa, even if only fleetingly in the latter. It helped that the anti-Apartheid struggle was so recent. No such memory unites the classes in Great Britain.

In 2011, in Chile, massive student protests opened up against a proposal to replace the public education system with a for-profit model. These protests continued for two years. They followed major protests against a dam and against rise of gas prices – all part of the slate of neo-liberal policy. Close to two hundred thousand students took to the streets on 30 June 2011 – brought together by the Confederation of Chilean Student Federations, led by the charismatic Camila Vallejo (University of Chile), Camilo Ballesteros Briones (University of Santiago) and Giorgio Jackson (Pontifical Catholic University of Chile). Under the sign of ‘Con Pasion por la Educación’ (Passion for Education), the students held a massive ‘kiss in’ in Santiago on 6 July. The militancy and the creativity brought the students popular support, although the government would not bend. A general strike a year later – on 28 June 2012 – did not move the government, which was voted out of power the next year. The socialist government of Michelle Bachelet promised to take the students seriously, drawing in left wing leaders Camila Vallejo (of the Communist Party) and Gabriel Boric (of the Autonomous Left) into her government. Bachelet’s government did not deliver on her promise. The protests continue and are likely to escalate.

This year, in 2016, the Spanish government attempted to put forward a fee hike for universities. School students – who can see their futures melt away – answered the call of the Students’ Union. They took to the streets for a two-day strike in April. This followed a three-day strike in October 2014 against a drift in fees that raised them by fifty per cent over the past three years. Forty-five thousand less students enrolled in Spanish universities. The hashtag for this protest was simple: #QueHablenLos45000, The 45,000 Speak! In 2016, as the cuts deepened, the anger was much greater. ‘Hijos de Puta’, read a sign – Sons of Bitches. No more needed to be said. Frustration was too high. Fierce clashes with the police came alongside social democratic demands – ‘Tuition, books and free transport for children of workers’ and ‘We want our scholarships’.

These changes – this debt-funded education – are anathema to students in many parts of the world. Their demands are at the level of affordability: they want to be able to enter college. It is beyond comprehension that college – higher education – would be priced out in democratic societies that have a commitment to equality of opportunity. This is not socialism. This is merely an erosion of the low standard of equality – not equality of outcomes, but of opportunity. This is the essence of neo-liberalism – the end to the basic promise of liberal equality.

Education of a wide variety would allow students to open their minds to different kinds of knowledge, to test their own developed skills to see what would be best for them to study. Resource constraints push students early into tracks – so that early in their secondary school careers students have to pick sciences or arts, applied work or intellectual activity. But this is far too early in their lives for students to know what is available, given the immense developments in these fields of study. By the time students make their intellectual choices, they do not yet know how these intellectual arenas have developed. A student bored with introductory chemistry might walk away from it but not realize until much later that bio-chemistry is fascinating for that student. Tracked education denies students the full exposure to what is available. It is merely one of the structural features of the denial of freedom to students.

What determines the choice of study for our students today? Neither their talents in many cases nor their interests drive them, but the monetary rewards that might come from those trajectories of study. Immense fears of debt and social pressure for upward mobility define the terrain ahead for most of our students – from India to Mexico. Students rush to study Economics, for instance, because they believe that mastery of the subject will put them in a good position to enter the financial sector. Their own interest in Economics is not the point; what is the point is the desire for a job with high compensation that would erase their student debt and provide their aspirations in a society where possession of commodities has come to define happiness.

Slowly, surely, interest in pure science and in philosophy will seem esoteric. These are research trajectories that do not necessarily lead to wealth. What they might lead to is personal fulfillment and, as importantly, social findings that improve human knowledge about itself and our planet. Some of this might have an impact upon commerce, but it is not commerce that drives the agenda in these fields of study. Entire arenas of investigation will become sidelined, tolerated for a time but then defunded as money chases after those areas of study that are themselves slated to produce money. Thought will dry up. Universities will become intellectual deserts.

When students at Jawaharlal Nehru University came under attack from the BJP and its tentacles, one of the complaints against the students was the following – they are students, so they should study and not indulge in politics. Red-hot outrage was directed at students regardless of what had raised them to moral protest – whether it was Kashmir or Dalits, conditions on campus or scholarship reductions. The issues mattered surely, but the indignation targeted the student protest itself.

Higher education – which should be universal in a democratic society – is not merely to be designed to prepare young people towards careers. That is the narrowest definition of education. Higher education’s purpose in a democratic society is to create the stage upon which young people learn to ask questions about their society, about their values, about the discrepancy between their values and their social institutions, and about what one can do about that discrepancy. In other words, higher education provides the space for young people to become citizens – to understand the role of political power towards the betterment and transformation of their social institutions.

Student protests from Chile to India have become commonplace not only because of fee hikes – the surface manifestation of neoliberal policy – but also because of what lurks underneath, namely the evisceration of student politics. If one looks closely at the sites of major student unrest, these are also places with major social dislocation because of long-term austerity regimes and because of recent attacks on the public sector and the commons. Broad social claims are being fought over in these societies. Students are merely part of this larger struggle. In 1966, the German students mistakenly chanted – today the students, tomorrow the workers. In fact, even in the mid-1960s, the workers played a social role alongside the students in Paris, Berlin, and London. The range of social protests in our time is even more startling – and positive. Students have already begun to root themselves in these protests. In none of the protests – from Chile to India again – have the students not chanted slogans about other struggles, dispossession in Chile, caste violence in India. Capacious visions emerge in these times. One cannot see these merely as student struggles. These are political struggles by students, who struggle to imagine a world that does not have the constraints of the world they are trying to grow up in.

Bio:
Vijay Prashad, who teaches at Trinity College, is the Chief Editor of LeftWord Books and a columnist for Frontline, Alternet, and BirGün. His latest book is The Death of the Nation and the Future of the Arab Revolution.

Tags: Indian University, Neoliberalism, University Autonomy
From: Issue 1/ Beyond Mumbai, 2012
← In Support of Students’ Political Activism
Is there a Calling on the Left? →
2 Comments Post a comment