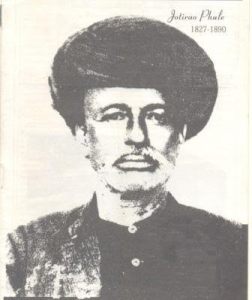 The Marathi speaking region of western India, divided linguistically into the state of Maharashtra since post-Independence times, has been home to two broad dissenting sects within Hinduism, both of which originated around the 13th century. Though these sects count Brahmins as founders and poet-saints amongst their members, yet both were profoundly anti-Brahmanical. The founder of the Mahanubhav sect was Chakradhar, a Brahmin, whose monotheism and radical ideas against caste and ritual practices perhaps forced the practitioners of this sect to use a secret code language to document their beliefs and practices. The more popular, continuous and ongoing, till contemporary times, is the Varkari sect the devotees of which worship the deity of Vitthal at the pilgrimage temple town of Pandharpur. No austere ritual marks the practices of this sect; lower caste and subaltern householder men and women are its members; the only ritual they may practice is the bi-annual vari, the pilgrimage on foot to Pandharpur, through which they earn the name Varkari, the one who goes on the vari. A second important feature of the Varkari sampradaya is the abhanga, the devotional songs composed by its saint-poets and sung by the Varkaris in kirtans, bhajan groups or on road to Pandharpur. Abhangas constitute the earliest body of literature in Marathi literary history.

It is necessary to remember this cultural backdrop in tracing the political history of the region. The Yadava kingdom of the 13th century was to give way in subsequent centuries to Muslim invasions and the several kingdoms of the Deccan Sultanate. It is a well-known fact that powerful Hindu groups were an integral part of the administrative and military establishment of these Muslim kingdoms. In the 17th century, a young man from a Shudra caste, Shivaji Bhosale, established the Maratha kingdom with forts and lands wrested from the Sultanates by warfare and stealth. Though he and his father before him were associated with the Deccan Sultans, he went on to offer a stiff resistance to them and to Aurangzeb, which became the stuff of narratives woven round his life from the late 19th century onwards. However, Shivaji’s progeny did not prove as intrepid a warrior as he, and soon the real power of the Maratha kingdom rested in the hands of its Brahmin Ministers, the Peshwas. From around the mid-18th century till the second decade of the 19th century, Peshwas ruled western India from their seat of power in Pune. It was perhaps one of the few regions in India where Brahmins enjoyed political and military power in addition to their traditional social and ritual status. Contemporary accounts of the period testify to the excesses of this power, the rigid enforcement of caste and gender norms and the ensuing oppression visited upon the population.

Jotirao Phule was born into a lower caste Mali family in a Brahmin hegemonic society, about a decade after the British defeated the Peshwas in 1818. This may explain his lifelong resistance to caste and gender hierarchy, which was fuelled and given shape by his exposure to Western radical literature and missionary writings and his involvement in contemporary Indian reform movement in the Bombay Presidency. Convinced that only secular education could liberate the oppressed classes, he began a school for untouchable girls in 1848, an unprecedented social initiative, followed by several others for untouchable boys, girls of all castes and a night school for working class adults. His wife, Savitribai Phule, a well-known educationist in her own right, and several associates, including Brahmin friends, were an integral part of these radical interventions. He went on to run orphanages as well as a home for pregnant upper caste widows, who were victims of sexual abuse, often in their own homes. Phule’s praxis is reflected in his writings, where in a number of genres, both traditional and modern, including a play, powadas or ballads, short verse in the abhanga metre, polemical prose tracts, he attempted to create a body of subaltern narrative and historiography in order to establish an identity for the oppressed classes and mobilize them politically. Phule’s use of traditional oral forms for his polemic was strategic, given that his subaltern audience was largely unlettered and it made sense to infuse radical political views into indigenous cultural forms. It must also be remembered that though Phule condemned devotional worship which is the foundation of the Varkari sect, he yet made use of the abhanga as the instrument of his political communication. The abhanga has long been in use as a poetic vehicle of dissent and interrogation in Marathi culture and literature, and is a form beloved of the Marathi speaking people. And though Phule called his own compositions akhanda, they have an unmistakable correspondence to traditional Varkari songs.

In his seminal prose polemic, Gulamgiri (1873), Phule offered a re-reading of Indian history. Subverting the current 19th century hypothesis of the proto Indo-Aryan people and the discourse on the glory of ancient Indian Aryan civilization, Phule asserted that the invading Aryans were in fact Brahmin outsiders, who imported into the idyllic pre-Aryan India ruled by the fabled just King Bali, the social evils of caste and gender exploitation. In this text he offered a satiric retelling of the stories of Vishnu incarnations, deliberately reading this Hindu mythology as the history of Aryan/Brahmin oppression of the indigenous dwellers of India and the construction of an exploitative caste hierarchy.

In the year 1873, Jotiba Phule, who was soon to be given the accolade Mahatma, established the Satyashodhak Samaj (the Society of Truth Seekers), an organisation aimed to mobilize and represent all oppressed groups, including women and the marginalized castes. It must be noted that the name Phule chose for his association stressed the search for truth as a primary goal. Through this association, Phule wished to create a social and political solidarity of diverse working-caste groups: a subaltern collective which he termed shudratishudra. Phule conceived much like Marx was to do around the same time, of a two-tiered social hierarchy in all his writings and exhortations: the hegemony of the bhatbrahman exploiting the productive shudratishudra. The Satyashodhak Samaj soon had a real presence in the political and cultural affairs of the region not only during Phule’s times but well into the early decades of the 20th century and was the foundation of the non-Brahman peasant movement in Maharashtra. Phule and his associates toured the length and breadth of the region, setting up branches of the Samaj and holding meetings in mofussil and rural areas, transforming social critique into a full-fledged movement of the peasants and working castes. This movement had two major objectives: to resist Brahmin hegemony in social, educational and colonial institutions and, at the same time, to represent the case of the subaltern to British policy makers. From the 1880s onwards, the Samaj had tremendous support revealed in the real interventions it made in the mobilization of the peasants against Brahmin moneylenders and petty officials as well as in discarding the services of the Brahmin priests and instituting progressive Satyashodhak practices in all rituals including marriages.

However, much like Mahatma Gandhi, Phule was aware of the necessity of a moral-spiritual centre to a revolutionary counter culture and the need of a religious core to political activities. He attempted to establish a universal religion, the Sarvajanik Satya Dharma. His last work, Sarvajanik Satya Dharma Pustak (The Book of the True Faith), published posthumously, laid out an alternative to the caste ridden Hindu society. One may see in this imagined world the lingering influences of his reading of the English radicals, especially Thomas Paine. Phule founded this ideal world on the idea of God as the Nirmik: the loving and rational creator of a just and benign world. The formulations of this religion are oddly secular: it is a republic of justice and equality, where God is a loving and indulgent parent. Phule dismisses the priest’s role as the intermediary in the communion between humans and God. The moral basis of this world is truth and reason and his theology is a rational and moral system which filters in and allows the good, the right, and the truthful to prevail. In G.P. Deshpande’s words, “Sarvajanik Satya Dharma Pustak is almost like Phule’s final testament. It is the summary statement of his theology and his view of what a rationally and scientific religious system could be for India and the Hindus (2002).”

Bio:
Dr. Rohini Mokashi-Punekar is Professor at IIT Guwahati. Besides publishing several papers in books and journals, she is the author of On the Threshold: Songs of Chokhamela (Altamira Press, 2005 and The Book Review Literary Trust, 2002), Untouchable Saints: an Indian Phenomenon (Manohar, 2005) and Vikram Seth: An Introduction (Cambridge University Press, 2009). She is currently engaged in translating medieval Varkari poetry from Marathi, which will be published by Penguin in their Black Classics series.