Guest-Editorial – The Beat and the Hungry generation: When losing became hip 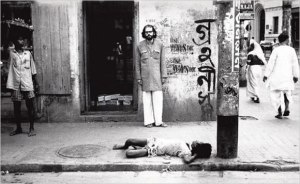 When Cafe Dissensus asked us to edit a special issue on the Beats and the Hungryalists, we were very unsure about the kind of response we might receive.  But, during the next few months, we received a stream of submissions and solicited works from writers, photographers, poets, artists, Beatniks, Hungry generation enthusiasts and academic researchers alike. It was indeed an enriching experience to go through the pieces, to learn about the new areas that have remained unexplored, to acquaint ourselves with some critical questions that require attention within the scope of the Beat and the Hungryalist literature, and to trace the mutual connections and differences between the two schools, their triumphs and follies.

For this special issue on the Beat and the Hungry Generation, in his superb essay, “Spring and Oblivion”, Indran Amirthanayagam revisits Allen Ginsberg’s Howl and Other Poems through his personal memory of the poet (who was close friends with his father), their interactions, the copy of the book gifted to his father by Allen and Ginsberg’s readings that Indran had attended.

Poet and Beat researcher, Marc Olmsted’s essay investigates Ginsberg’s source and commitment towards Tibetan Buddhism and tries to find how he balanced it with his political views/socialism.

While Marc Goldin (writer and Beat researcher) traces Burroughs and his pals, their days of haze and hallucinations all the way up to Tangier – its magic and influence on their writing, Uttaran Das Gupta’s “Performing the hobo in Jack Kerouac’s On the Road” questions if Kerouac was indeed a hobo and investigates if playing the hobo itself was an art of some sort, scrutinising it through theories of theatre. Titas De Sarkar does a fine critical survey of Hungryalist Manifestoes. Priyabrata Das’s survey of socio-economic, political and cultural condition of Bengal in the 1940s is a fine prelude to the Hungry Generation.

Art critic (and wife of famous Hungryalist painter, Anil Karanjai), Juliet Reynolds’ essay is a comparative study of Art in Hungry Generation and Beat generation, its importance in both these schools (that were predominantly seen as a movement of poets/writers), and how the artists and the writers of both these generations inspired each other. Reynolds’ piece makes an interesting observation on how the image of a young girl became the symbol of inspiration for the Hungry Generation (artists in particular).

In her fascinating essay on the women Beats, poet Pamela Twining (Partner of Beat poet, Andy Clausen) tells us how these women Beats have been over-shadowed by their male counterparts, yet, many of them have inspired a new generation of American girls to grow up differently. It also tells us about their rebelliousness, sexuality, and their contribution towards the feminist consciousness in the 1960s.

Nandini Dhar’s strong feminist critic of Hungry Generation writers and their writing also brings in some necessary and interesting questions to the fore, though we have certain reservations about some of her readings of the Hungry poets.

We also have a beautiful piece by Brinda Bose, who looks at the two decades of collaborations between Bob Dylan and Allen Ginsberg through poetry, music and films. Sagorika Singha’s review essay analyzes two Beatnik films, Rob Epstein and Jeffrey Friedman’s Howl and Walter Salles’ On the Road.

Maitreyee Bhattacharjee Chowdhury writes a first-hand account of her visit to the Roychoudhury residence in Kolkata, where she meets and converses with Samir Roychoudhury about Allen Ginsberg and the Hungryalist Movement.

Tanmoy Bhattacharjee interviews Subimal Basak, who talks about his life and times. We also reprint The Sunflower Collective’s Interview with Malay Roychoudhury, the founder of the Hungry Generation and Juliet Reynolds, art critic and wife of the famous Hungryalist painter, Anil Karanjai.

In this issue, we are delighted to include a wonderful photo-essay by well-known photographer, Sally Davies, who documents the East village, places in and around the apartment, where Allen Ginsberg lived until early 1980s. Matthew Bialer’s photo-essay makes time liquid and walks through the Fifth Avenue to remind us of the poem, ‘My Sad Self’ by Allen Gingsberg. Ishan Marvel and Akash Sangma take us through a Baul sojourn, one that inspired the Beats and The Hungryalists alike.

Anuj Gupta, Yatin Dawra and Dhairya Gupta have an audio-visual montage that juxtaposes social commentary with electronica, while paying homage to the work of Beats, especially Ginsberg’s poetry.

And finally some beat inspired poetry by Avner Pariat, Ishan Marvel, and Nellie Edwards to take a pause from the road and smoke a long one.

We would like to point out here that as much as we would have liked to cover other Beats and Hungry Generation writers, due to the nature of submissions and some other reasons, it did not materialise. However, having said that, we believe we have covered some new areas that might give the Beatniks and the Hungry Generation enthusiasts some food for thought. Our other intension was to create a dialogue between the aficionados and researchers of the two schools of literature and art that we dig.

While editing the issue, we realised that the reception of Hungry poetics is a more complex phenomenon.  Their politics of non-conformation, their furious questioning of morality through obscenity (much like the Beats), may not always be comprehended, if seen through the lens of black and white.

We hope you will enjoy reading!

Guest-Editors:
Abhimanyu Kumar is a journalist. His poems and fiction have appeared in several journals. He co-edits The Sunflower Collective.

Goirick Brahmachari works as a consultant in a research organisation in New Delhi. His first collection of poems, For the love of Pork, was published from Les Editions du Zaporogue, Denmark in January, 2016. He co-edits The Sunflower Collective.

Tags: 1960s, Beat Poets, Hungryalist Movement
From: Issue 1/ Beyond Mumbai, 2012
← Project Ginsberg & Me: Ruminations on Freedom
Contents – The Beat and the Hungry generation: When losing became hip (Issue 26) →
No comments yet