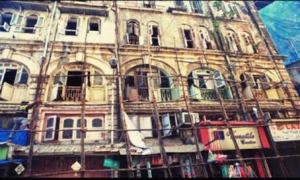 Seven-years-old. I was seven-years-old when they forced me to have a part of my femininity cut off. I don’t remember much from my childhood. My memories are very vague. I wonder if these vague memories are because of what happened to me when I was only a little girl. Yet, despite my poor memory, I clearly remember the day I was circumcised. That day is still vivid in my memory.

My grandmother and mom told me that I was going for a mithishitabi. In my community, mithishitabi is usually a happy occasion, a celebration for young girls and women when they have their special days, like birthdays and pregnancies. As a child I loved shitabis. For me and other children, it was an occasion for dressing up and eating lots of yummy delicacies. I remember insisting to my mother that I would wear new clothes and a topi. In all this excitement, I didn’t bother to ask her about the place or the purpose for this shitabi. It was just another occasion to have a good time. After dressing up in my favourite clothes, I left with my grandmother and mom to go to the shitabi.

To my dismay, we didn’t go to any shitabi.

Instead, we went to a place that was unfamiliar to me. It was an old looking building. The steps were covered with dust and were broken. I was confused and lost. It didn’t look like a happy place and I wondered why the shitabi would be held here or why we were here. We went inside somebody’s house and were greeted by a middle-aged woman. She was a stranger to me. I was sure I’d never seen her before. I asked my mother what was going on, but she chose to ignore me. By now, I felt uncomfortable and also a little scared.

It was a small house with only one room, a kitchen and a storage unit attached to the ceiling. This room was dim and gloomy and made me feel a bit spooked.

The Aunty chatted with us for a while and then turned away to do something. I couldn’t see. When she turned around to face us, she had a blade and 2 or 3 other peculiar items in her hands. I cannot exactly recall the other devices in her hand. She came forward and sat down in front of me. My mind went blank but my focus was on the blade in her hand. What she was going to do with the blade, I thought.

My grandmother then asked me to remove my pants. Out of innocence, I told them that I did not want to use their bathroom. My 7-year-old brain could not comprehend any other reason why my grandmother would ask me to remove my pants, and that too in front of an unknown woman. She knew how shy I was; even in front of my own mother I would hesitate to take my pants off. But this was my grandmother asking, so I obliged. They made me lie down and held my hands firmly to the ground. The next thing I remember is the sight of the silver blade and a sharp agonizing pain in my most intimate area. I screamed in terror. What had they done? The Aunty told me to keep quiet or she would call the bhoot (ghost) that stayed in her storage unit. I didn’t oblige them this time. I screamed and yelled and tried to free myself. It was all in vain. They had done what they wanted to do. I cried all the way home. It hurt every time I urinated. The sight of blood made me sick.

After that day I never really looked forward to shitabis. Somehow the idea of attending one ceased to excite me.

This supposedly major event in my life was celebrated in a grand way. Family and friends were invited to a feast and everyone congratulated me like I had achieved something remarkable. But now in retrospect, I question the celebration for such an event. Was it really something to be celebrated?

I was not aware of what happened to me that day. But today I know. It was while reading an article about female genital cutting that I realised that it happened to me too. I was hurt and angry and confronted my mother about this. She told me that she had a religious obligation and she did what she thought was the right thing to do at that time. I know that is not true because there is nothing in the Quran about female circumcision. This practice predates Islam and is one of the many cultural practices that amount to gender-based violence.

Fortunately for me, I did not face any medical repercussions despite the unhygienic and brutal way in which I was circumcised. I know I’m one of the lucky ones. It could have been so much worse. But it has made a deep and traumatic psychological impact on me. I feel disgusted, ashamed, and angry at what has been done to me. There is no reason that justifies this barbaric practice. There is no reason that justifies taking away a woman’s inherent physical rights and ability to experience pleasure. Young girls are scarred for life and this needs to be stopped.

I recently brought up this issue with my Bohra friends. I genuinely wanted to know their opinions on FGM without influencing them with mine. I was extremely disheartened to realize that most of them support FGM, despite not having any concrete reasons. I tried explaining to them that there were no benefits to the procedure, only damage done to girls too young to speak or fight for themselves. But they sounded convinced with this practice. I remember them saying that they were sure that there must be some benefits, or else why would their mothers do it? Just because we don’t know doesn’t mean it’s wrong. Anyway, our religion says we must do it, so how can it be wrong?

I left it there.

This story is not about rebelling against my religion. I strongly believe that FGM is wrong in all ways and abolishing the practice will only bring a positive change in our society.

Bio:
Fatema Kabira is a 19-year-old girl who is currently pursuing her Bachelors degree at KC College, Mumbai.