Sedition in a Democracy 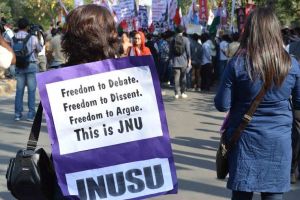 This article is being written because of a certain political urgency that the issue of sedition warrants today in the context of a democracy like India, especially in the context of limiting the autonomy of university spaces. The brutal crackdown on university campuses like Hyderabad Central University and Jawaharlal Nehru University, the silent sanctioning of brutalities in the name of cow protection, the recent clamour for naming contesting opinions as anti-nationalistic are incidents symptomatic of the degeneration of accessibility of democracy and the urgent need to reclaim it for oneself. This article is an attempt to look into certain aspects of what it means to have sedition laws in a democracy like that of India.

While many people have become aware of sedition laws in the country, courtesy the recent developments in JNU, what most people are not aware of is its colonial roots. India’s important nationalist leader, Gandhi, was tried for sedition for the articles he wrote in Young India against the British colonial regime. This brings us to one of the biggest conundrums that the history of any free nation can possible encounter – what is sedition in a free democratic country? Sedition law under Section 124 of the Indian Penal Code substantiates the incitement of violence to be a necessary condition for charges to be filed (as pointed out in an earlier judgement, Kedarnath Singh vs State of Bihar, 1962, where the verdict clearly indicated “in the history of sedition the  section  must  be  so construed as  to limit  its  application  to  acts involving  intention   or   tendency   to   create disorder, or  disturbance of  law  and  order;  or incitement to violence”), which often is not the case. As the eminent lawyer, Lawrence Liang suggested, it is not necessarily the punitive action at the end of the day that makes the law so draconian, but the process itself. While in the case of Aseem Trivedi (who was targeted by the state for having redrawn the national symbols in his Cartoons Against Corruption), it was about the freedom of artistic expression, in JNU it was about sloganeering. Whatever forms this was to take on, the problems of the law loom large!

The recent incidents in JNU has thrown open a lot of questions, some relevant while some misdirected. The clamour for being a nationalist has echoed through various sections of the society in myriad voices. Sentiments and emotions were aroused. “Anti-nationals” were hated. Media trial was on. The last few weeks were replete with incidents of sensation (it needs to be pointed out that this ‘sensationalisation’ techniques were something that the media in India carried forward dutifully, why else would the breaking news title of one of the foremost channels read – “PhD in Antinationalism at JNU”?). Amidst all this uproar, one was drawn into a futile struggle of placing oneself between the binary of nationalist and anti-nationalist. And the point when one starts censoring one’s own speech or actions, in this context, it is the moment of success of the right-wing assault.

At this stage it becomes essential to clarify what is meant by a right-wing assault. When nationalism gets defined within narrow boundaries, built on often contested stereotypes and structured around identities and discourses satisfying a privileged class/caste narrative – that is when it becomes necessary to differentiate between different notions of being nationalistic. What Kanhaiya Kumar, the JNU Students Union President, repeatedly did was to assert the nuances of what nationalism means to him as a member of the AISF, the student wing of the Communist Party of India (CPI). An often made mistake is to look at JNU as a left bastion, without emphasising that this red brigade has their own different shades. Kanhaiya Kumar’s position was well within the confines of the political ideology that he represented, however not symbolic of the entire JNU population.

This is why it becomes important to assert the right to freedom of speech and expression within university spaces. And this assertion becomes necessary primarily because then the question would have had to shift from whether JNU is national or anti-national to whether the spaces of debate and dissent are being stifled or not. While Kanhaiya Kumar happens to be the JNUSU President, his views would be radically different from Shehla Rashid (JNUSU Vice President) or Rama Naga (JNUSU General Secretary) or Umar Khalid or Anirban Bhattacharya (both students arrested for sedition charges along with Kanhaiya Kumar). JNU has fostered these spaces of debate and dissent where all these differences exist not in mutual appreciation but in their contentions. Hence, when there is an appeal and a struggle to restore JNU to its normalcy after all the recent happenings, it is not about a sanitised, self-censored space but as a space that is vocal of all the struggles of people across the country, whether it be the question of Kashmir, Manipur, AFSPA, capital punishment or that of self-determination!

What status do academics enjoy under a repressive regime? A lot of people have commented about this in detail. When a repressive government comes to power through a popular appeal, the legitimacy that warrants their actions is what is alarming. This is when gagging of spaces of diverse opinions, couched in the populist notions of nationalism becomes the most effective means of suppressing dissent. What does democracy stand for then? What happens when the same democratically elected government stands against the very ethos of democracy itself? How can one ever legitimise the mob lynching of people by self-appointed “gaurakshaks” (cow-protectors)? How can one legitimise the institutional violence against lower caste groups within the society? Academic freedom is far more important under such a regime. In such a repressive regime, such as this, anything and everything will be seditious. While we have still not thought enough on why we hold on to sedition charges within a democratic regime (a law constituted by the British colonisers), here we are at a point when such a law gets thumped on every contesting opinion. Strategically this would be the apt moment to fight against sedition, because in today’s scenario newer equations seem to be emerging every day. Being anti-government equals being seditious which incidentally happens to be anti-national as well!!

It is time to move beyond futile attempts at legitimising oneself within nationalistic or anti-nationalistic definitions (because a sense of patriotism cannot be narrowly defined by chanting Bharat Mata Ki Jai – incidentally in a language which more than half the population of India does not speak in and within a problematic idolisation of gender identity), and look at more concrete issues within democracy. There has been an urgency that the right-wing has been showing in terms of beating patriotism into people, without however thinking even once if patriotism is a feeling that comes from within and if there are people who are “perceived” to be unpatriotic, then do we beat patriotism into them or start by analysing why are they not patriotic? This will be possible only if we stand by the ethos of a democratic regime! All the Ds become important in today’s context – democracy, debate, dissent, discussion, and deliberation! Let us not narrow down our views based on binaries created by the media. As individuals, let us think – debate, discuss, dissent, deliberate in this democracy.

Bio:
Meera Gopakumar is currently pursuing PhD in Political Science from JNU. Her research interests include studying the intersectionality between science, society and politics.

Tags: JNU, Sedition, Student Movements in India
From: Issue 1/ Beyond Mumbai, 2012
← Capitalising on Capital Punishment
Guest Editorial: JNU and its Tradition(s) of Dissent →
No comments yet