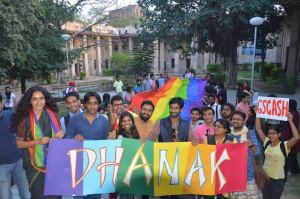 Jawaharlal Nehru University—a politically vibrant campus (and a strong hub of the Indian Left students’ movement among others), has recently been in the news for its fierce protection of our right to dissent and celebrate. The university’s academic reputation and traditions of dissent were attacked by the Indian Government, led by Prime Minister Narendra Modi of the Bharatiya Janata Party (BJP), over baseless accusations including allegations that the university had become an anti-national hub threatening national security and integrity. The ‘anti-nationals’ are none other than students, faculty, and staff who have Left leanings and oppose any kind of dictatorial or fascist forces that want to curb the autonomy of universities. Almost the entire JNU fraternity has come together to resist the Right-wing government’s bullying and its agenda to destroy intellectual thought, throttle young voices and spread hatred amongst countrymen with the help of a vicious bourgeois media and many nefarious outfits like RSS and VHP.

University campuses with strong student movements have always been spaces of resistance—a commune for those defying patriarchy, home to the ‘deviant Other.’ Thus it has become imperative for neo-liberal forces to break down Indian student movements. The regressive and homophobic faces of university administrations and the State have been unveiled with the forced implementation of Lyngdoh Committee Recommendations, brutal state-sponsored violence on protesting students of Himachal Pradesh, the suicide of a dalit scholar at the Hyderabad Central University, and the harassments of students for their sexual choices and orientations. The new ‘tactics’ of attack and the continuous attempt to control democratic spaces and curb rights by university authorities force us to ask if a university should follow regressive laws and directives of the courts and the government at the Centre, or support its students’ fight for social injustice? At JNU, we are proud of the faculty and fellow scholars who stand by us in politics and life, and who protect our right to dissent, celebrate our rights, and inspire our ‘nationalism.’

Several student unions across India have strongly supported the LGBTQ movement and stood by queer activists. I, being a queer activist and student of JNU, have received huge support from different sections on campus, but at the same time have faced homophobia and misogyny as well. A few questions thus arise regarding the understanding of LGBTQ issues on a campus like JNU. For instace, how do Left student organisations understand the LGBTQ movement and issues related to sexual identity, choice and identity politics? Secondly, how are non-student communities on campus made aware of concepts like sex, desire, agency, space, and individual rights.

In November 2003, after several consultations and discussions, a group of JNU students formed a queer collective—Anjuman. Like most queer collectives, Anjuman started with small discussions, meetings, and designing posters that contained basic definitions of various sexual identities, Section 377 of the Indian Penal Code, myths, stereotypes, and queer history in India. In 2004, Anjuman invited Roselle Pineda, a Filipina Communist lesbian, to talk about the lesbian movement in the Philippines. Akhil Bharatiya Vidyarthi Parishad (ABVP), the Right-wing student body of BJP, made several attempts to disrupt the talk. Later that year, a queer student’s room was ransacked and homophobic notices were stuck on his door. Members of Anjuman, mainly its male members, were harassed and humiliated in public spaces. Anjuman survived only for a few more months. Now a question emerges about the role of the JNU Students’ Union. Did existing Left student organisations on campus take any steps to register their protest of this harassment with the administration? What was the role of the administration? Sadly, though one or two posters came out against homophobia, the administration was silent. Student groups failed to put up a unified resistance against Right-wing terror. Anjuman did not die; it was forced to invisibilise itself, slowly.

‘Coming out’ is not a ‘ritual’ or an act necessary to be queer. But we have to also understand that to ‘be in the closet’ is not a choice, it is a forced condition due to extreme homophobia and fundamentalist mind-sets. Visibility of the ‘other’ also challenges the normative structures of society. Queer collectives are important because they bring visibility to queer issues as well as the identity of the other ‘out of the closet.’ It is thus extremely important for queer activists to understand that politicisation of activists is as important as the sensitisation of people. A queer collective is not only a safe space to find fellow comrades but also a space to politicise its occupants about the right to not be ‘out’!

Though queer collectives on campus provide a safe space for LGBT people, there are problems with representation, and a culture of silence often enforced by members within the community. Homo-normative stereotypes within the community lead to transphobia, discrimination against bisexuals, and patriarchal misogyny towards lesbians. We remember Anjuman as a supportive space for many to be ‘out’ in those difficult times including for the late Priya Thanga, a fierce and bold queer Sri Lankan activist and thinker, whose shocking death in 2015 is still fresh in our memories.

Coming to JNU in 2006, it took me some time to find other queer students on campus. I was privileged to be welcomed by a group of queer-feminist and lesbian friends, who not only became my support group but also guided me on queer issues in my early struggle of ‘coming out.’ We met up often and discussed forming a group. As most of us were related to theatre and performance arts, we conceived a queer cultural and support group. Ankush Gupta took the initiative and Dhanak, JNU’s second queer collective, came into existence in 2012. We initially met in a member’s hostel room—a ‘private’ space important to queer members in the closet, and we never forced anyone to ‘come out.’ As boys are not allowed in girls’ hostels in JNU, we met in a male member’s room. After a point, lesbian voices raised critical questions about the meeting location and the power dynamics perpetuating through a non-neutral meeting ground. It took some questioning of our own longstanding patriarchal socialization to understand the significance of such objections, and while consensus seemed to be reached to meet in other spaces besides those that belonged to male or individual members of the collective, it still has a long way to go before being actualised.

Rainbow beside the Red Flag

Another significant moment in the history of Indian Left student politics was when Students’ Federation of India (SFI) fielded me as the first openly gay candidate for the JNUSU elections in 2013. My candidature brought a strong wave of awareness of queer rights on campus. The administration officially took notice of my gay existence, political parties suddenly became hyper-aware of LGBTQ politics, and the media made a story out of my candidature. I was happy to see media highlighting the fact that a Left student organisation fielded an openly gay candidate, until they asked about my personal life, the ‘number’ of boyfriends I had had, my first kiss and sexual experience, and the most common question asked to all homosexuals: ‘when did you become gay?’ Being gay is neither temporal nor periodic, I was born gay! I ‘came out’ with SFI in one of those magic moments in 2013 to the entire Nation.

However, the Supreme Court of India recriminalized Section 377 on 11 December 2013. There was no question of going back to the closet so we decided to hold more programmes and stay visible. Dhanak significantly chose to have its first public event in January 2014 as the nation was fighting for the repeal of Section 377. Manola Gayatri, among the few openly lesbian women on campus at the time, spoke on lesbian invisibility as part of the first ‘coming out’ student panel in JNU. In March of the same year, I organised a queer film festival–Satrang. We designed a colourful poster where one of the images from a film showed two bare chested men embracing each other. It was too erotic, too ‘western’ and too abnormal for the JNU administration. I was called by the cultural coordinator and informed that the administration was not supporting the festival. I was advised to be more sensitive towards undergraduate students on campus who would think that homosexuality was natural rather than a ‘disease’ if they see queer films. No logic, no argument was accepted and I had to ask the students’ union to intervene as we had only one day left for the opening. The festival, a closed-door screening with no support from the JNU administration, happened under prescribed conditions. The problem of the administration was two-fold: the sudden visibility of queer students was unnerving to their hetero-normative sensibility and being a central university they were very scared to not abide by the SC verdict of recriminalizing Section 377.

The second edition of Satrang was curated by Sappho for Equality from Kolkata. We requested Sappho to curate the festival as we wanted to build a network of queer collectives and organisations across the city and country. The 2014 edition saw a huge turn out and support from queer collectives of different universities in Delhi. Admirably the Feminist Faculty Collective and other associations/ unions on JNU campus came in support of LGBTQ politics.

The JNU campus continues to have strong homophobic overtones. Gay men are called ‘gigolos’ by fellow students; a lecturer asked a gay student how his ‘animal rights’ activism is going on, some members of International Students’ Association regard homosexuality as a sinful act and us as criminals, and the administration is still not ready to accept our presence. Currently we await the release of our friends accused of being ‘anti-nationals’ from jail after being charged under sedition through a law as archaic and colonial as the one criminalising homosexual behaviour. JNU queer activists and individuals stand at the threshold of a long battle just beginning, joining students’ movements and fronts of resistances fighting for justice, freedom, and choice. It is spring in JNU and the red bougainvilleas are singing songs of solidarity. It is a different spring. We are in love with JNU—the place of rebels. Once our loved ones—the students who are arrested under sedition charges—come out of jail, the entire JNU shall celebrate with the 3rd edition of Satrang—the festival of love and dissent.

*The article is born out of a strong queer-feminist bonding with my friend Manola.

Bio:
Gourab Ghosh is an LGBT activist and a theatre artist based in Delhi. He has been active in student politics on and off JNU campus for past seven years. He is the first openly gay candidate to have contested a university student union election in India. He is politically affiliated to the Students’ Federation of India.

Tags: JNU, Sedition, Student Movements in India
From: Issue 1/ Beyond Mumbai, 2012
← The Frayed Pallu of Mother India’s Sari
My Dance in JNU, with JNU and for JNU: A History of Dance in JNU →
One Comment Post a comment