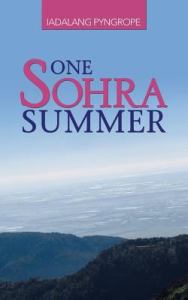 Reading poetry and fiction, written by authors in North East India, has not only been my passion for the last decade or so but virtually a fierce commitment. In the last two or three decades, North East India has witnessed a feverish spate of  writing, variously described as ‘political’, dealing with the question of  violence. Whether this is right or not is not the question here. What I was looking at was the talent of creative writing in this much misunderstood region of the country. A younger generation of poets and poet-novelists emerged after a senior generation of poets. I came across Iadalang Pyngrope’s novel because she herself asked me to read it and comment on it. In fact, way back in the 1990s, she had shared with me that she had completed the draft of her novel which she said was going to be ‘different’. This novel came out only two years back. And how ‘different’ it was! Having lived in Shillong all my life, nurtured by its winter, clammy summer, the hills, the rain and the mesmerising wind, I discovered that this novel, One Sohra Summer, was asking for empathy from readers. Prodded by its quest for history, I took to this novel like fish to water, a refreshing welcome from many award-winning novels, where I had to rack my brain for comprehending the kind of narrative technique the author was trumping. Moreover, I thought that Pyngrope’s novel might have exploited the socio-political crises that her state witnessed in the 80s and 90s, ethnic movements and militancy, which left many of us at crossroads. But this was not so. Instead came out a very well written and animated tale of Khasi life in the eighteenth and nineteenth centuries.

Iadalang Pyngrope’s One Sohra Summer is a delightful blend of history and fiction. Set against the backdrop of the late 18th and early 19th centuries, the novel gives a vivid account of Khasi society in the East Khasi hills, in Sohra, now popularly known as Cherrapunjee. Significantly, it is set against the background of the pre-Christian era.

The novel speaks about trade of the people, who want to make forays in Silhot (Sylhet) in Bangladesh, and the erstwhile East Pakistan. Sohra borders Bangladesh. The novel is an exploratory account of what life could have been in a tiny village, where economic compulsions made people to take the arduous task of travelling to Silhot, for barter and trade. An ordinary villager, Bor, takes upon himself to display his exploits of travelling to Silhot to improve his quality of life, and also as he claims, for the betterment of the villagers. The close knit society regards him with awe, as he sets forth to go there, with his team. Soon he makes more frequent trips to that area, which the villagers know about, but have not visited. In one of the trips he takes with him Kupar, whom his daughter, Mon, secretly admires. Kupar cannot withstand the ravages of the journey, and dies. Bor suffers from a guilt-complex after this and his daughter refuses to marry anyone else. The villagers treat him indifferently, and he becomes not only a broken man, but lives a life of inertia.

After much persuasion, Mon marries another person, who is in love with her. Soon differences arise between the two, when her husband also decides to travel to Silhot for business. She returns home crestfallen, subject to the taunts of her sisters and mother. One day in a nearby village, she sees a person preaching the gospel. The first traces of Christianity have arrived. Soon after, her father Bor dies in what appears to be a ‘suicide ‘. Bor dies guilt-ridden.

The novel is an interesting exploration of personal and inter-community relations, for trade and economic prosperity. There are frequent references to the language of Sylhet, reference to dkhars or outsiders, and the co-existence of hill people and plainsmen, by means of business and trade. The theme of economic sustainability is deftly woven around village and community life in a village. Going to Silhot to improve the material quality of life is the object of desire for many. Bor’s family possesses gorgeous finery, and this seems to be the target of envy. But after Kurbah’s death, Bor’s village is assailed by a devastating storm. The interweaving of religion, myth, the oral tradition and preternatural beliefs are the hallmarks of the novel. Although the narrative is straightforward and lucid, this transparency gives the novel a striking readability. But beneath is a society trying for betterment in living and economic prosperity. The trade relations between the Khasi society and Silhot are prominently revealed. The historical dimension of the novel is one of its unique features with its subtle historical overtones. Historical persuasion augments the novel with fine glimpses into the past.

And what about the present? Sohra is now a tourist’s paradise, while Silhot still exists quietly on the other side. Is history forgotten? Perhaps, yes; perhaps, no. This novel has a disquieting open-endedness about it. The Prologue depicts Mon eagerly waiting for her father to return. The Epilogue describes a tourist-guide showing tourists stalagmites and stalactites. The rest is history!

The book captures the rhythm of the history of the Khasi people living in the borders of what is now Bangladesh. The partition of the country sequestered trade and cultural and social connections with Sylhet. Borders are both real and imaginary. But today after the creation of geographical borders, there is no trade, except for the clandestine ways in which this takes place.

Iadalang Pyngrope’s novel is a passionately woven tale of life among the Khasis in the early nineteenth century, the first rumblings of the European influx, a primordial society of innocence, where a visit to Silhot (Sylhet) was not only expeditious, but held in awe for wealth and goods. In the midst of the kind of clever fiction being written today in India, where language is the maxim and technique rather than telling a good story is the premium, I consider this novel to be a watershed in its depiction of history with an exciting narrative. The Khasi society with its struggles and the histoicity of the novel strike one as the novel’s embellishing chord. The language is simple but evocative and the trajectory of the narrative pace makes it very interesting, indeed.

I loved the novel for its historical associations and connect. The historical assumption that if the British or the Europeans had not come, the Khasi society would have been socially different is, of course, a hypothesis. But the connect with what is now Bangladesh suggests a borderless history and bonds between racial communities, which today people are silent about in order to be politically correct. I loved the novel for its impassioned historical rootedness.

I single it out as the best book I read in 2015. It’s a pity that such books do not find mention in literary columns, because the realism of the nineteenth century English novel is in crisis due to technical virtuosity and pastiche. Hence telling a story well is passé. Set against the backrop of a nascent and folkloristic society, with the silent incursion of the Europeans in a pre-Christian era, this succinct novel of 122 pages is captivating for its innocence, transparent storytelling and narrative. These are aspects of fiction I love for pleasure and readability.

Bio:
Ananya S Guha lives in Shillong where he has been raised. He has over thirty four years of teaching and administrative experience. He has seven collections of poetry. His poems have been widely anthologized and published internationally. His articles on Education and Distance Education have appeared in National and International journals. He writes book reviews for newspapers and e-zines and edits poetry columns for The Thumb Print Magazine and The Peregrine Muse. Currently he is a very senior academic in the Indira Gandhi National Open University, India.