This article is an abridged version of ‘Bhattacharjee, A. (2012). ‘Muslim-Jewish Relations in Sidi Janjira’, in Toledano, E.R. (Ed) African Communities in Asia and the Mediterranean: Identities between Integration and Conflict, New Jersey, Africa World Press. A book in the Harriet Tubman Series on the African Diaspora. Reproduced here with permission of volume editor, publisher and series editor.

It has been noted that the Jewish and Muslim communities in India have had the closest ties anywhere in the world. Both use the same nomenclature for many religious terms – namaz for prayers, roza for fasts, masjid/mashed for place of worship and kabristan for cemetery, amongst others and they have even shared cemeteries in some places. While Tipu Sultan, the Muslim ruler of Mysore, commuted the death sentence and then pardoned a few Jewish soldiers taken captive by his army during one of the Anglo-Mysore Wars, at the behest of his mother, Jews and Muslims have also shared power in an Indian Princely State, both of which may be treated as examples in the present strife-torn world.

The tiny Sidi state of Janjira in the Konkan coast of India, saw Shalom Bapuji Israel (Wargharkar), a Jew become the Karbhari (prime minister) from 1891 to 1896, under Nawab Sidi Ahmed Khan, a Muslim ruler of Abyssinian origin. Records reveal that the state saw a renaissance and period of great progress during Israel’s karbhariship and was long remembered and revered after he reverted back to British service after the completion of his tenure. This is a unique equation of a Jew and a Muslim sharing power, attesting to the high level of integration that Jews in India achieved. 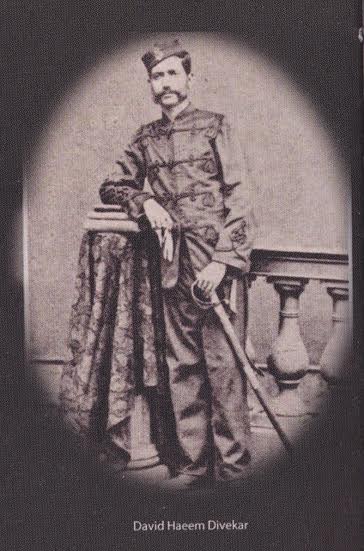 Samuel Divekar was in the service of the British East India Company and had been taken captive during the Anglo-Mysore War of 1792-99 launched against Tipu Sultan, the King of Mysore, who was a Muslim. He was on the death-row, due to be executed on orders of Tipu. However, according to the legend, Tipu Sultan’s mother intervened and had the death sentence revoked on learning that Samuel Divekar was a ‘Banu Israel,’ i.e. belonging to a community quoted reverentially in the Holy Koran and not easily come across in distant India. As thanksgiving for the narrow escape, Samuel Divekar had the Keneseth Eliyahoo or the ‘Gate of Mercy’ Synagogue built at Thane, Mumbai. It is the biggest and the most
Bene Israeli synagogue in the region.

Muslims had been coming to the Konkan coast by way of trade much before the Muslim invasion of the north in 1000 AD by Mahmud of Ghazni and subsequent Islamization of a large number of Indian people. Historian H. S. Kehimkar (1937)  believes that the first Jews came to India around 175 BC when, he assumes, they fled Galilee to escape the oppression of the Greek overlord Antiochus Epiphanes and have stayed on ever since. A more contemporary historian, Benjamin J. Israel, opines that they came to India in the fifth or sixth century AD from either South Arabia or Persia. It is believed that the ship in which they were traveling got blown off course and was wrecked at Navgaon, about 20 miles south of Mumbai. These people maintained some rudimentary observance of the Jewish practice in spite of long centuries of isolation, which included the strict observance of the Sabbath, circumcision of the male child on the eighth day, following of certain dietary laws, especially about fish, and observance of some of the festivals at approximately the correct time, till their ‘discovery’ and religious renaissance by David Rahabani, a Cochini Jew. More recently, a rather controversial study of the genetic material of the Indian Bene Israel people by Parfitt in 2002, has linked them as the direct descendants of the Cohanim, the small group of hereditary Israelite priests of the Second Temple of Jerusalem. One might assume that they had the knowledge of refining oil used for the ‘eternal flame’ in the synagogue and possibly drew upon that knowledge on reaching India to make a livelihood. Combined with their strict observation of the Sabbath, they began to be identified as ‘Shanwar Telis’ or ‘Saturday oil pressers’ in the western coast of India.

It is not known what language or dresses the Bene Israel people had on arrival, but they soon adopted Marathi, the local language and the local dressing styles and became one of the many castes that abounded in the region. Old photographs, however, reveal that the men wore side locks, which linked them in later studies to Yemenite Jews. As their population grew, they spread throughout the Konkan coast and adopted the local system of the village name as surname, appending kar at the end of the village name. Thus names like Penkar, Ashtamkar, Dandekar, Rajpurkarare commonly found, drawn from the names of the villages of Pen, Ashtam, Danda and Rajapuri respectively. According to Israel (1998), at one time there were as many as 142 such surnames linking them to villages identified in the erstwhile Kolaba, now Raigad district, in the Konkan coast of Maharashtra. The area of Jewish inhabitation is marked by the presence of simple, unadorned synagogues, prayer halls and Jewish cemeteries, many of which are now closed down due to disuse following the migration of the Jewish people to Israel after 1948.

Pride of India a Mosque and a Synagogue at Borlai Habshi, Janjira

Dynastic rule of the Muslim Sidis was established in the kingdoms of Janjira and Sachin till they merged with the Indian Union in 1948 and is well recorded by Fayeeza Jasdanwala in Kenneth Robbins and John Mcleod (eds), Habshi Amarat. Both these places are the sole examples where a small number of Sub-Saharan Africans have ruled over a composite non-African population. The composition of the population in both these places included, besides the resident Hindus and Muslims, even a number of Jews. The Sidi kingdom of Sachin, near Surat, was created when Balu Miyan, a rebel from the Sidi kingdom of Janjira, joined hands with the Maratha Peshwa (ruler) against his brother-in-law Sidi Jauhar for a bid to the throne in 1790.

The Nawab and the Karbhari of Janjira

The three and a half Talukas of the former Janjira State have synagogues, prayer halls, and Jewish cemeteries. The presence and density of the Jewish religious structures within the boundaries of the erstwhile Janjira State is the same as the rest of the Konkan region and strongly suggests that there was a sizable Jewish population under the Sidi rulers.

The practice of peasants enlisting into the army service of the prevailing ruler is typical the world over and remains in India to date. The Bene Israel people were no exceptions, They were a part of Shivaji’s army, as also the navy of the powerful Angrias and the Sidis, who ruled the Konkan coast.

According to Israel (1982), the patriarch of the Wargharkar family had a different surname till he was settled in Warghari village of Janjira state. Israel continues that the clan of Wargharkars is very small and all of them traced their roots to this single family. Shalom Bapuji Israel studied up to matriculation and joined Government service as a clerk in 1872 at a salary of 10 rupees per month. He rose rapidly through the revenue and legal departments and by 1880 became a Deputy Collector. By 1888 he was bestowed the honorary title of Khan Saheb. In 1891, he was appointed Karbhari of Janjira State with a rather high salary, where he remained for the next six years. 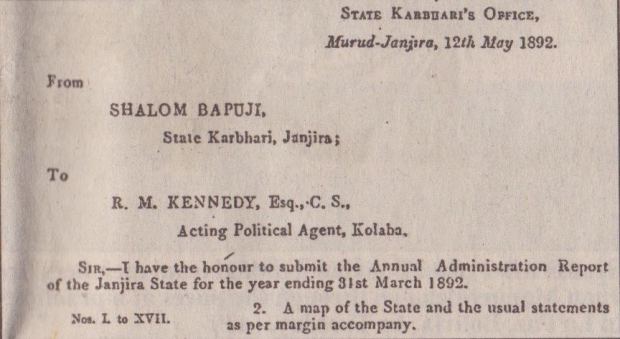 Shalom Bapuji Israel initiated many far-reaching reforms in the State, which won the approval of R.A. Lamb, the Political Agent of Kolaba greatly. Nawab Sidi Ahmed Khan, eager to please the Political Agent implemented most of the reforms suggested, and governance in the state improved, as did productivity of crops and collection of revenue. Communal tensions were firmly reigned in and all the communities – Hindus, Muslims, and Jews – coexisted peacefully. The Nawab of Janjira and Shalom Bapuji Israel enjoyed the most cordial relations.

Bapuji Israel’s third and youngest son, Jacob, joined Government service as a clerk in the Revenue Department at Sirur, Poona district and quickly rose through the ranks. In 1901 he was appointed Karbhari of Aundh State. It was a troubled period for the State. Being a confidante of the Political Agent, Jacob Bapuji Israel served two terms of five years in the position and saw three Chiefs in ten years. This earned him the dubious distinction of being a ‘king-maker and king-breaker’. In 1910 he was awarded the title of Khan Bahadur. Shalom B Israel’s son, Hyam Shalom, also studied up to graduation and distinguished himself in government service. He was appointed Karbhari of Akalkot State in 1917, during the reign of Raje Saheb F S Bhosle. He was decorated with an OBE in 1938.

The simple unadorned synagogues in the Konkan region strongly suggest that the synagogues merely supported the religious needs of a not so wealthy community.

Indian Muslims, including the Sidi nawabs, while drawing from the same Holy Koran as Muslims all over the world, treated the Jews in their kingdom with respect and tolerance inspite of their small numbers. The incidence of Shalom B Israel and Nawab Sidi Ahmed Khan is not an exception but merely the highest point of cordial Jewish-Sidi relationship.  Tipu Sultan’s pardon of the captured Bene Israeli soldiers is another glittering example of the esteem the Muslims had held the Jews in, in India.

Author:
Dr. Anuradha Bhattacharjee is an alumna of the London School of Economics (Economic History) and an ICSSR Fellow. Her Ph.D. dissertation ‘Polish Refugees in India 1942–48’, was awarded the  Charles Wallace India Trust fellowship (2004) and subsequently the Bendre Prize for Best Dissertation by the University of Pune, 2006. It was published under the title The Second Homeland: Polish Refugees in India (Sage, 2012). The work has been translated into Polish and commissioned as a documentary film. She has been a post-doctoral research fellow at the Indian Institute of Management, Ahmedabad (IIMA) and the Centre for Culture, Media and Governance, Jamia Millia Islamia, New Delhi, and a Visiting Professor at Tianjin University of Finance and Economics, China, and Assistant Professor at Mudra Institute of Communication, Ahmedabad (MICA).  She has expertise in Economics, History and Media.