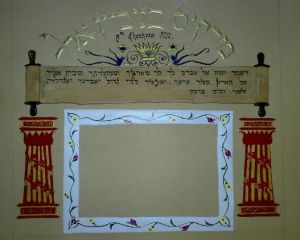 When I first visited the village of Kothareddypalem in the Guntur district of coastal Andhra in 2001, SadokYacobi, the leader of the Bene Ephraim – a small community of former Madiga Dalits – took me to the local mosque to talk to his friends. Both Sadok and his Muslim companions stressed that the two communities had a special connection and that, in the conditions of India, where both represented ‘minority’ communities, this connection was particularly important.

Nine years later, during Shahid Perwez’s fieldwork in the village, he noted that Sadok’s Muslim friend provided catering for the festivals in the synagogue. When we later interviewed this person and asked him what he thought about the Bene Ephraim tradition, he replied that he had a lot of respect for their leaders and did not object to them practicing Judaism, but that he was not convinced that they had always been Jewish. When we inquired about what in his opinion had prompted them to embrace Judaism he laughed and said, ‘Israel needs people to fight for her’.

This brief statement contains a number of implicit assumptions about Judaism, Jewishness and the relationship between the Jews and the State of Israel. It suggests a denial of agency for the Bene Ephraim, and an implicit denial of the possibility of a community embracing Judaism on its own accord, without interference from Israel and without a promise of material gain. Such assumptions, which are not limited to the Muslim discourse but demonstrated by a number of local commentators, build upon time-old anti-Semitic stereotypes about perceived Jewish wealth. What comes here anew is a reference to the conflict in the Middle East and an explicit suggestion that if the Bene Ephraim were to succeed in their attempt to immigrate, they would be fighting Israel’s neighbors.  Here the Jewishness of the Bene Ephraim, which in one context – the reality of Judaism and Islam being ‘minority’ religions in India – is seen as a positive identity marker, in the context of the conflict in the Middle East is construed as a threat.

Similarly, the Bene Ephraim perceive Indian Muslims as friends in the general context of Indian religious life and as a potential threat in the context of synagogue security. In 2004, the community made headlines when the police of Hyderabad (the capital of the state of Andhra Pradesh) uncovered a plot by alleged agents of a militarist organization based in Pakistan, Lashkar-e-Tayyiba (later implicated in the Mumbai attacks of 2008), to attack Americans in Hyderabad and the Jewish families in Guntur. According to the Times of India, it was the first time that anybody in Andhra Pradesh realized that there were Jews in this district (Times of India 2004). After this incident and subsequently after the Mumbai attacks, the community applied to the police to increase security measures for them in the village of Kothareddypalem, where they built a synagogue.

When I visited the community a few months after the Mumbai attacks, I was shown faint traces of the Star of David and other Jewish symbols on the huts of the Bene Ephraim that had to be washed off for some period of time. This was explained as a strategy to avoid a possible terrorist attack on Jewish houses. I also witnessed the community leaders, Sadok and Shmuel Yacobi, communicating with local newspaper reporters and stressing their need for more protection.

When talking about their fears of terrorists, they kept stressing that their relations with the Muslims in the village were exceptionally good, as their tradition was similar to Judaism. They said that they respected the Muslim religion, but at the same time were fearful about the possibility of Islamist terrorist organizations attacking the synagogue. In a different episode, the leaders of the community associated the perceived threat of terrorism with Islam much more explicitly. When Shahid Perwez, who conducted fieldwork among the Bene Ephraim, first met the Yacobis face-to-face, the latter initially expressed concern about his Indian Muslim background.  Shahid had to offer a long explanation regarding the nature of our research, as well as his attitude towards terrorism, after which the Yacobis granted him a permission to continue with our work and welcomed him into the community. Once Shahid settled in the village, the Jewish signs and symbols reappeared on the Bene Ephraim homes. He was fully accepted in the community and doubts about his intentions were never raised again.

What caused the community to apply for enhanced protection and make their concerns known to the mass media? The Bene Ephraim were of course bound to feel that the Mumbai attacks, which involved what was probably the first organized violent attack carried out on Indian soil against Jewish people on account of them being Jewish or Israeli, were too close to home. However, their perception of the community’s security issues also appears to be intertwined with their experiences and accounts of discrimination. As Shahid Perwez and I argued elsewhere, the Judaisation of the Bene Ephraim could be seen as a protest against caste inequality, in the process of which the community developed narratives comparing their condition of discrimination to that of the Jewish people (2013).  It is not surprising then that for the Yacobis portraying their community as victims of international terrorism meant re-asserting their Jewishness and establishing a connection with the Jewish communities worldwide.  It was also supposed to attract the attention of the Israeli government and of international Jewish organizations. That is not to say that their fears of potential attacks on the synagogue are unfounded, but to highlight the very special nature of the community’s discourse on ‘Islamic terrorism’ which in an unusual interplay of collective historical memories reflects both the reality of anti-Jewish attacks worldwide, the character of the Indian social system, and the politics of Jewish identity arbitration in the State of Israel.

In the episodes described above, Indian Jews and Muslims appear to be going beyond simplistic constructions of ‘bad-Jews/Muslims’ vs ‘good-Jews/Muslims’.[i] The Muslim friend of the Bene Ephraim leaders sees the community as a potential threat to the Muslims of the Middle East, and yet, he respects their religious beliefs and helps the Bene Ephraim during synagogue functions. These examples demonstrate that the relationship between Jews and Muslims in the village has witnessed tropes of sameness sharing space with images of uncompromising difference, and the realities of local social organization intersecting with issues of international politics.

In some contexts, both parties borrow from historical and political discourses which became associated with Jews and Muslims. In other contexts, they still relate to their Jewish and Muslim neighbours as individuals or groups not associated with any stereotypes. Moreover, even when local Jews and Muslims engage in using stereotypes which could be read as explicitly anti-Jewish or anti-Muslim, they carefully negotiate the boundary between a Jewish or Muslim person as a person and as a symbol of the perceived threat associated with their religious affiliation. The ‘Jews’ and ‘Muslims’ that they fear are categories produced by the realities of Indian and international politics and on many levels both communities make an effort to ensure that their attitude towards these categories does not affect the actual relationships between the people. However, it is not hard to see how under different circumstances, their hostility towards ‘Jews’ and ‘Muslims’ as symbols can develop into hostility towards Jews and Muslims as people. As we know only too well, animosity towards the State of Israel has resulted in numerous instances of anti-Jewish violence, and the Bene Ephraim may not be immune from it. Similarly, though the numbers of Indian Jews and Muslims are such that it would be hard to imagine an anti-Muslim riot organized by the Jews, their rhetoric of the ‘war on terror’ contributes to the general vilification of Islam, which may lead to anti-Muslim communal violence of which independent India has a well-documented and tragic history.

Shryock, A. (2010) ‘Introduction: Islam as an object of fear and affection’, in A. Shryock ed., Islamophobia/Islamophilia: beyond the politics of enemy and friend, Bloomington: Indiana University Press.

[i] For a discussion of this dichotomy in respect of Muslims see Shryock 2010.

Dr. Yulia Egorova is a Reader in the Department of Anthropology at Durham University and the Director of its Centre for the Study of Jewish Culture, Society and Politics. She is the author of a number of publications, including Jews and India: Perceptions and Image, Routledge Curzon, London, 2006 and The Jews of Andhra Pradesh: Contesting Caste and Religion in South India, Oxford University Press, Oxford, 2013. She co-edited Jews, Muslims and Mass Media: Mediating the ‘Other’, Routledge, London, 2004.

Tags: Jews, Muslims, South Asia
From: Issue 1/ Beyond Mumbai, 2012
← Perceptions of Jews among Lucknawi Shias
Muslim-Jewish Relations in India: A Perspective →
No comments yet