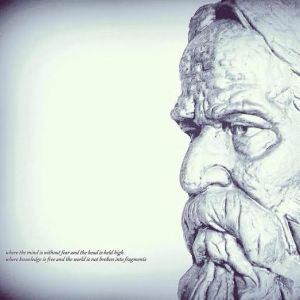 In the world scrounging for some humane leftovers, Tagore stands somewhat like a bohemian. After all, it was him who stood defiant to Gandhi on many occasions, among them notably in 1934, when Gandhi used the earthquake in Bihar for his drive against untouchability by calling it chastisement from God.

Incidentally, it was Tagore who named him ‘Mahatma’.

Tagore stood vehemently against Gandhi (in 1934) and was disappointed by his unscientific line of reasoning. He maintained “not the idea of disapproving untouchability but the concept of God’s whim would be resonating in the masses more.” This method of the Mahatma worried him. Looking at India and the world today with all godmen and mullahs and the flocking throngs of humans at their doorsteps, I cannot help but admire the intelligence of this man and his thought-process almost a century ago.

Moreover, Tagore’s views on Gandhi’s charkha being not a spiritual tool but a tool that “does not require anyone to think; one simply turns the wheel of the antiquated invention endlessly, using the minimum of judgment and stamina” and abhorrence of sexual abstinence says a lot about the man and his views in the early twentieth century, standing the test of time.

It can be safely said that in a world filled with followers of Tagore, there would be less religion and more spiritualism. The modern liberal would do well to read one of the lesser known works of Tagore called, Vishwa Parichay (1937), which incidentally was dedicated to Satyendranath Bose, where Tagore talks about relativity, atom and infinite space. If you further read his gem of a poem ‘Ami’, where he says the colors are how our eyes see them, you catch glimpses of ‘cogito ergo sum’.

“No emerald, no coral, no light, no rose,

Neither ‘you’ nor ‘me’ should you suppose.”

Even more interesting for the modern liberal would be Tagore’s ideas on nationalism. In his words (on the British Raj), the subcontinent had profited from “discussions centered upon Shakespeare’s drama and Byron’s poetry and above all…the large-hearted liberalism of nineteenth-century English politics.” And yet, Tagore maintained how this did not manifest itself in good governance, when it came to ruling the colonial subject. He maintained, “(it) was truly best in their own civilization, the upholding of dignity of human relationships, has no place in the British administration of this country (Undivided India).” After all, he was the man who wrote, “Where the world has not been broken into fragments by narrow domestic walls.” The anti-national(ist) wrote anthems for two nation-states. What we learn from this is to never ascribe tags to people because the person who takes pride in his roots need not be jingoistic about it.

Tagore wrote, “Circumstances almost compel us to learn English, and this lucky accident has given us the opportunity of access into the richest of all poetical literatures of the world.” I can see how in a post-colonial world filled with the egos of nation states, Tagore would do well with the few, who believe that there is something good to learn from everyone.

Tagore was a proud, at moments even fierce, nationalist, who not only made India prouder in the world but took pride in our cultural heritage. As Oxford explains, “In Gangem Defluit Isis, to all the Latin thrown at the audience Tagore responded “by a volley of Sanskrit,” as Marjorie Sykes, one of Tagore’s companion playfully mentioned. Here was a man who spoke in Sanskrit while being felicitated with an honorary doctorate by the Oxford University just to get back at the Englishmen.

It can be said that Tagore’s pride came from not a sense of inferiority, which plagues the modern nationalist, but from an overwhelming confidence in the idea that Eastern ethos can stand up to Western modernity or as some would like to call it, the Western culture.

He exhorted against the idea that cultures are unchangeable monoliths. Tagore was ready to borrow the best elements from other cultures as is evident from his statement, “Whatever we understand and enjoy in human products instantly becomes ours, wherever they might have their origin. I am proud of my humanity when I can acknowledge the poets and artists of other countries as my own. Let me feel with unalloyed gladness that all the great glories of man are mine. Therefore it hurts me deeply when the cry of rejection rings loud against the West in my country with the clamour that Western education can only injure us.” This above statement illustrates something that a modern Indian liberal will do well to understand as in the battle of Alexander and Ashoka and Aurangzeb, we are all too eager to choose permanent sides.

In the world of Tagore, nation states exist like in a state of osmosis with a constant give-and-take learning and unlearning. Ideas prevail and reason wins. Here is Amartya Sen’s translation of Tagore:

Leave this chanting and singing and
telling of beads!
Whom do you worship in this lonely
dark corner of a temple with doors
all shut?
Open your eyes and see your God
is not before you!
He is there where the tiller is tilling
the hard ground and where the
path maker is breaking stones.
He is with them in sun and in shower,
and his garment is covered with dust.

Won’t we all do well to understand and appreciate this idea? In Tagore’s ideals, we would stand and claim ourselves as Indian by heritage with pride and yet not drink from the chalice of vulgar patriotism that seems to be the taste of the town.

If Tagore were to be described to the modern Indian liberal, it can be done just by one quote of his: “Patriotism cannot be our final spiritual shelter; my refuge is humanity. I will not buy glass for the price of diamonds, and I will never allow patriotism to triumph over humanity as long as I live.” Nothing more is left to be said.

It has to be understood that, when the idea of a nation based on a common identity rather than a civic nationalism is dreamt of, it is rosy and beautiful. Slogans like “One country, one land, and one people” fill us with a tribal pride that can’t be compared.

Just like the communist utopias, religious nationalism or any kind of mono-nationalism eventually has to whip out the common unifying factor to get the masses in order, the factor here being as varied as religion, color or even a philosophical idea of governance.

Leaders and thinkers use that established unity to call upon the masses to unite behind the common flag. This might result in instant results for the leaders, but eventually only makes the hardliners, who spout the most isolating xenophobic ideas, stronger.

A great example is Pakistan, where, despite diversity, the rhetoric of Islam has been a constant to ensure that the country stays united. The same rhetoric made Jinnah want a common language for the entire nation, eventually leading to the division of East and West. The same rhetoric is currently leading the pro-Sunni, Wahabi elements making others feeling left out.

Where such ideas falter the most, those societies start looking at nations as monolith. This is possibly bound to happen more with theocracies and communist societies. Then they try to curb the outliers, instead ensuring that both the outliers and the mainstream groups become even more intolerant towards each other. This usually ends in genocide and/or a Partition.

A nation-state can only sustain itself when it is united enough to evoke a civic sense of nationalism in its people and is flexible enough to ensure that its diversity is appreciated. Something that Tagore perhaps understood much better than any of his sub-continental contemporaries.

Tagore and Iqbal: India and Pakistan

Tagore can be undisputedly called a sub-continental heritage just like Iqbal, and yet these two stalwarts are now seen as rivals of two different civilizations. Iqbal is more like everything Pakistan, Tagore less so.

First of all, a disclaimer. If it is just about the verses and the instant pleasure that the verses provide, I have to say Iqbal is more delicious for my poetic appetite. But here we talk of how two different ideas were conceived by two poets, who lived in the same time and, it can be argued, were influenced by the same poet heroes, namely Rumi, Hafiz and Shirazi. Whereas Tagore was always more universal and egalitarian in his poetry and essays, Iqbal seems more Islamic in how he saw the world, especially if you read his works like Shikwa and Jawab-e-Shikwa. Iqbal’s world was a strange mix of socialist Islam or perhaps Iqbal himself was confused in what he wanted out of the world, as he also wrote “Uttho meri duniya ke ghareebo ko jaga do” (roughly meaning “rise the poor of the world”) in a near-communist strain.

Iqbal wrote “Sare jaha se accha” and yet in his Jawab, he makes God say, how, although he as a Muslim is all too proud of Islam, yet subconsciously is Brahmanical (a folly in God’s eyes, in Iqbal’s words.) If we look at the two countries that these two poets have guided with their thoughts, Pakistan’s path of becoming more religious with time and trying to find solutions for the whole Islamic ummah (Pakistan even christened their bomb as the Islamic bomb) somewhere resonates more with Iqbal’s Pakistan much more than Jinnah’s. Barring the recent surge of radical Hinduism (which can be argued to be more xenophobic than religious) of last two decades, India has certainly been broader in accommodating diversity. Even with the religious right currently in power, nobody can directly call India a Hindu country without being ridiculed.

On Iqbal’s death Tagore wrote, “The death of Sir Muhammad Iqbal creates a void in literature that like a mortal wound will take a very long time to heal. India whose place in the world is too narrow can ill afford to miss a poet whose poetry had such universal value.” Even there, Tagore talks of universal value and nationalism in the same breath, viewing Iqbal as someone who could have given more to India and also to the world. This sums up Tagore’s vision perfectly. As far as Iqbal is concerned, he never acknowledged the existence of Tagore and, if Iqbal scholar Ikram Chugtai’s words are to be believed, he even felt somewhat jealous of all that Tagore had.

That Tagore was an institution in himself can hardly be denied. What can we learn from him in today’s context? The fact that even in the hard-boiled propaganda machine the world has become, we must not slough what we are in order to be more acceptable and yet keep looking at others as if every moment is a moment to learn.

Tagore argues for a world where the mind is without fear and the head is held high for each of us and may be it is in the striving of that pursuit that we should use our lives. For, as Tagore would undoubtedly say, a better world is possible; it is just waiting for us to find it. In his words, “Reach high, for stars lie hidden in you. Dream deep, for every dream precedes the goal.”

Raj Shekhar Sen is based out of San Francisco, California, having lived the majority of his life scattered around cities in Central India before renegading to the US of A. He considers writing to be primarily a hobby but has been fortunate enough to be published in a few journals, including Nivasini and Aquirelle. His day job is internet surfing and sometimes business consulting.

Tags: Rabindranath Tagore, Santiniketan, Visva Bharati
From: Issue 1/ Beyond Mumbai, 2012
← How to Draw Rabindranath
An Indian in England →
No comments yet