The Sojourn of the Baghdadi Jews of India 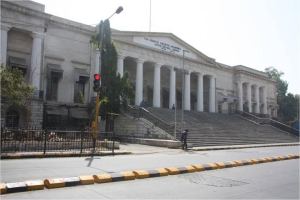 Toward the end of the eighteenth century, the mosaic of Jewish communities in India was altered by the arrival of Arabic- speaking Jews from Baghdad and Basra and other parts of the Ottoman Empire. Supplemented by Jews from Persia and Afghanistan, these newcomers became collectively known as Iraqi or Baghdadi Jews. Encouraged by the British to go to India to expand commerce eastward, they formed a large trade diaspora extending from Europe to Asia. In India, the Baghdadis established themselves first in Surat and then in Calcutta and Bombay. Prominent families such as the Sassoons, Ezras, Eliases, Gubbays, Kadouries, and Abrahams became wealthy merchants or acted as middlemen for the large cotton, jute, and tobacco processing plants. As pioneers in the textile industry, they provided employment in the mills for thousands of people, especially Jews.  In fact, the establishment of these mills and other facilities provided by the Sassoons proved an enormous attraction for Jews from Baghdad and other parts of the Ottoman Empire to immigrate to Bombay.

The Sassoons, in particular, contributed significantly to the civic development of Bombay, endowing that city with many benevolent institutions such as museums, libraries, training institutes, and medical facilities open to all classes and creeds, as well as the first sea docks. Below this merchant elite, however, a large number of less fortunate Baghdadi Jews depended for their survival on the doles of the Sassoon Trusts. The identity of the community in India was to be shaped by their interactions with other Jews, nationalism, and Zionism.

When the Baghdadis first arrived in Bombay in the 1830s, they associated with the Bene Israel, using their synagogues and cemeteries, and encouraged their co-religionists’ return to Orthodox Judaism. They were early contributors to the Bene Israel school.  Toward the end of the nineteenth century, however, the Bagdadis began to disassociate themselves from their brethren. They established their own schools, synagogues, and charity trusts and attempted to exclude Bene Israel from fully participating in them. As their prosperity and status increased, the fair –skinned Baghdads aspired to be considered as Europeans and, although retaining their Sephardic Jewish identity, to be assimilated legally, politically, and socially into the British community. Emphasizing what they described as a lack of Orthodoxy among the Bene Israel, their possible intermarriage with non-Jews, and their assimilation of Indian customs, the Baghdadis tried to persuade the Europeans to distinguish between them and their “native” co-religionists. Issues of purity, caste, and color which would have affected relations between the two groups in the ordinary Indian environment were intensified in the British colonial context, which fostered racial separation between Indians and the British. This cleavage appeared by 1870 and continued to manifest itself throughout the early twentieth century, as their efforts to establish their status as Europeans, unconnected with any indigenous community, especially vis-à-vis electoral representation, intensified right after the First World War. They wanted to be treated like Jews elsewhere in the British Empire, not like Indians. The British however, consistently refused to distinguish between Baghdadi and other Indian Jews. The tension between the two communities, continuing to manifest itself throughout the early twentieth century, diminished as the population of both communities declined in the second half of the twentieth century due to emigration.

In the nineteenth century, the Baghdadis launched Judaeo-Arabic papers, to be followed by English language periodicals from the l930s to l950s. The Jacob Sassoon Free School, created in Bombay at the turn of the century to offer instruction in English and Hebrew to Baghdadi children, and almost guaranteeing employment to graduates – and even drop-outs – in the Sassoon textile firms, at one time would accept only a handful of highly selected Bene Israel. It now has hardly any Jews in the school; the student population is almost entirely Muslim, reflecting the neighborhood in which it is located. Well-to-do Baghdadis, however, often sent their children to Christian-run schools where the education was thought to be better, even though they could not observe the Sabbath and Jewish holidays. This was true in Calcutta as well, where the Baghdadis had also established Jewish schools.

Aside from voting, the Baghdadi Jews in India, on the whole, were not active in politics. They supported Britain during the l857 revolt, took pride in participating in projects honoring the accession and visits to India of British monarchs, and contributed to the erections of statues in their honor. A few were knighted. In Calcutta, Baghdadi Jews served as sheriffs, municipal councilors, and honorary magistrates. In Bombay, David Sassoon declined most public appointments offered by the government of Bombay and accepted only that of justice of the peace, in which capacity he arbitrated disputes between Jews. Other Baghdadis were members of the Bombay and imperial Legislative Councils and one, Sassoon J. David, was the head (the equivalent of mayor) of the Bombay Municipal Corporation in 1921-22.  Another Baghdadi, Meyer Nissim, became the mayor in l929.

As Indian nationalism emerged, the pro-British Baghdadis (unlike the Bene Israel) had no ambivalence about their identity and their stand on nationalist and communal issues. They emphasized their foreign origin. As the nationalist movement grew, so did the fears of the Baghdadis, except for a few individuals. The mercantile elite had shed their Arabic customs, dress and language and become more Anglicized faster than the lower and middle classes. Silliman has suggested that the Baghdadis were neither British nor Indian, but considered their Jewishness as their core identity. They tended to socialize among themselves.

Despite the general indifference of the Baghdadi community toward Zionism, a handful of middle-class Baghdadis formed the Bombay Zionist Association and managed to keep it alive from the l920s on, carrying the flag of the movement. They established newspapers which became staunch supporters (and at times, the official organs) of Zionism. A short-lived Zionist association in Calcutta, with Sir David Ezra, the leader of the local Jewish community as president, did not survive into the l930s. In general, with the exception of people like David Ezra and Sir Victor Sassoon, wealthy Baghdadis in India, like their Sephardic counterparts elsewhere, tended to be apolitical, or only enmeshed in affairs where they lived. Thus they were not very interested in or supportive of the Zionist movement, either politically or financially. To a community not having direct experience of anti-Semitism, it seemed to be primarily an Ashkenazi Jewish concern. This changed in the l930s as Central European Jewish refugees began to arrive in India, many of them settling in Bombay and Calcutta. During the war years, upper-class Baghdadi Jews contributed generously to the British war effort and refugee absorption, less so to Zionism. Middle-class Baghdadis, meanwhile, continued with the day-to-day work of the Zionist organizations and the newspapers, enlisting Bene Israel in Bombay when they could and cooperating with the continental Jewish refugees.

The almost simultaneous emergence of Indian and Israeli independence posed a challenge to Baghdadi identity and, although they celebrated Indian independence, it provided the catalyst for emigration. The Baghdadis, having considered themselves – although not always having been accepted – as members of the European community, doubted they would be comfortable in the new India. Economic regulations issued by the Indian government restricted imports and controlled the export of foreign exchange, seriously hampering the business of many wealthy Baghdadis. With family, connections, and funds abroad, the upper classes were free to migrate to Western countries such as Great Britain, Canada, the United States, and to Australia.  Even less affluent Baghdadis who had relatives abroad or who could find a source of livelihood in the West also departed, with a relatively small percentage going to Israel compared to Bene Israel and Cochin Jews, who migrated predominantly to the new Jewish state. The Baghdadis had arrived with the British and ultimately departed with them. Of what had once been a community of perhaps 5000 Baghdadis, hardly one hundred remain in India today, mostly in Mumbai with barely thirty in Calcutta. The two synagogues in Mumbai, Knesset Eliyahu in Fort and Magen David in Byculla, supported by the Sassoon Trusts, are reasonably crowded on the holidays, but rely on Bene Israel or occasional foreign Jews to make up the required quorum of ten males for daily prayers. In Calcutta, services rotate between two synagogues, Beth El and Magen David.

Today, with communities in western countries, Australia, Israel, and Shanghai, the Baghdadi Jews of India struggle to preserve some of their heritage and culture. Relationships across the globe remain close fostered by frequent travel, the internet, and social media. Today we would consider the Baghdadi Jews a transnational community.