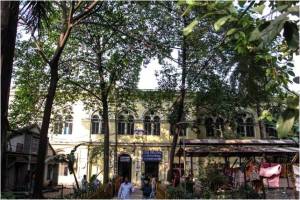 While it is true that since 1947, Indian Jews have departed the subcontinent in significant numbers for Israel, the United States, Canada, Australia, and Great Britain, the reasons for this population decline, however, have been contentious. The works of literature – including fiction, drama, poetry and literature for young adults – that have emerged from the Indian Jewish community tell many and complicated stories about the community – and its shrinkage.  Most contemporary Indian Jewish fiction has emerged from Western India’s historic Bene Israel community. While the Bene Israel has experienced the most dramatic population drop of any of India’s Jewish communities (from roughly 20 000 individuals in 1948 to less than 5000 today), it remains India’s most vibrant and best organized, both in the subcontinent and outside.

The first work of fiction written in English by a member of India’s Jewish community was Meera Mahadevan’s book Shulamith (1975). Born Miriam Jacob, Mahadevan originally wrote the novel in Hindi; it was entitled Apna Ghar. In its original title, Shulamith forecasts the narrative’s central question: where is the home of the Bene Israel Jews? As the novel opens (the year is 1955), Michael, the husband of the eponymous character, has just departed for Israel. His wife has refused to accompany him. Shulamith’s insistence on remaining in India rests on three principles: her personal obligations to the extended family (she is repeatedly compared to the peepal tree that shelters their home), her belief that the Bene Israel have been treated with tolerance and are, therefore, part of the Indian fabric, and the fact that her family has already been displaced from Karachi during partition and should not therefore be uprooted again.

But Shulamith seems to be fighting a losing battle. Her son Uriel also moves to Israel at the end of the novel. Shulamith is, by then, resigned and neither blesses him nor objects, but hastily arranges his wedding with Simha, his Jewish girlfriend. The couple settles in Israel and locates Michael, whom Uriel prompts to return to India. Michael comes back changed, freer in his affection to Shulamith than in the past, and more certain of his own Indianness. Unfortunately, Shulamith dies on the day of his return; Michael is so engrossed in narrating the pros and cons of Israeli life that he doesn’t even notice her passing. Though the novel concludes with an affirmation of Indianness, it seems that little has been gained by Shulamith’s loyalty.

Sophie Judah’s collection of interrelated short stories, Dropped from Heaven (2007), is perhaps even more pessimistic about the possibility of maintaining Jewish communities in India. Set in the fictional town of Jwalanagar, and spanning the period from 1890 to 2004, Dropped from Heaven was written in Israel, where the author has resided since 1972. The final story of the collection, “The Funeral,” recounts the visit of Joseph Naor to the hometown he left at the age of ten to make aliyah. He learns that a single Jewish inhabitant, Eliza Samuel, remains in the town and is dying. Joseph is instructed to visit her as “[s]he will be glad to see a Jewish face at her deathbed” (227). As a fellow Jew from the same town, Eliza, extracts a promise from Joseph to properly dispose of her body upon her death. This promise turns out to be very difficult to fulfill. The regional Jewish population is so depleted that Joseph is unable to gather a minyan, the quorum of ten Jewish adults required to say the prayer for the dead. The funeral is “a sad, cut-to-pieces affair” (239). There is no one to sit shiva (the traditional week of mourning). Joseph decides to depart the town, for to him “it is all dead” (240).

The prolific Bene Israel writer Esther David (author of The Book of Esther and By the Sabarmati, among others) tells a story with many similarities in Book of Rachel (2006). The eponymous Rachel’s children and grandchildren all live in Israel – she is the last remaining Jew in the town of Danda, and the caretaker of the local synagogue. Rachel herself refuses to emigrate, but she does not oppose her children’s decisions to live in Israel. Rachel views the village inhabitants as her family and they, in turn “appreciated the fact that … she spoke Marathi with the right intonations, just like them, and also knew all the Maharashtrian customs, so much so that often they introduced her to their relatives as a Konkanasth Brahmin” (5). Rachel’s experiences as a Jew in India are therefore characterized by tolerance – but that tolerance is tied to the misrecognition, and even erasure, of her Jewish identity by those closest to her.

When Mordecai, a member of the synagogue board, attempts to sell the building for commercial use, Rachel is spurred into action. When the synagogue committee arrives at Rachel’s home for a meeting with her, her daughter (who has flown in from Israel), Judah (a Bombay-based lawyer), and the would-be purchasers, there is an open confrontation. Mordecai defends his motivations, asserting: “‘All my life I have selflessly worked for the good of the community.’ Rachel smiled. ‘What community? Where is it? I assume that is the very reason you have sold our house of prayer, isn’t it?’” (166). Rachel must affirm the community’s nonexistence in order to claim the right to preserve the very structure that symbolizes it.  In her own way, like Mordecai, Rachel agrees to the community’s dissolution. The sale is ultimately stymied; instead, the synagogue will be converted into a museum documenting and displaying artifacts of Jewish life on the Konkan coast. This is a victory of sorts, but one confirms the disappearance of Jewish life as such, which can now only be memorialized.

Esther David’s most recent novel, Shalom India Housing Society (2007), depicts an Ahmedabad where the Jewish community has come together in a single housing development. In the opening short story, the narrator explains that

[u]ntil now, the new tenants of Shalom India Housing Society had celebrated Passover at the synagogue with the entire community. But at the time of this, their first Passover after the riots, there was still tension in the walled city. … A man had been stabbed in broad daylight at the crossroads … every stabbing in the city made the Jews feel afraid and insecure. It was in this tense atmosphere that the Jewish families of Ahmedabad decided to celebrate Passover on their own, within their own homes (9).

The book puts the lie to the myth that India’s Jews are unaffected by communalism, as demonstrated from the fragmentation and the loss of communal ritual that is its premise.  Characters leave for Pakistan or Israel; their descendants live in Canada and Great Britain. It is impossible to find Jewish tenants for all the apartments in the housing society; at times it is difficult to find any tenants at all. Several characters marry outside the community and struggle to find a place for themselves either in India or outside, though converts and those who marry non-Jews are still embraced by their families and immediate community. Israel and India in particular offer conflicting pulls.

Hadassah, the subject of the last story and ostensible narrator of the text, is explicitly positioned as the stand-in for Esther David.  She has lived in both Israel and Europe, and her “Jewishness is abstract, something which was there and not there,” learned by “spinning tales about the Bene Israel Jews of India” (211). The text concludes by noting that the other Bene Israel Jews, though confused and uncomfortable around Hadassah “were heartened by the mere fact that she had booked her own funeral space, six feet by six, at the new Jewish cemetery … by paying an advance of rupees five hundred only” (212). It is therefore her inevitable death that solidifies Hadassah’s identification with the Bene Israel community. The text offers an ironic hope for Jewish survival via its final appeal to the reader to consider the merits of the new cemetery.

It may seem paradoxical that as the Bene Israel population in India itself has declined, the literary output – and its complexity – has only increased. The last few years have also seen a flurry of literary activity in other Indian Jewish communities.  Jael Silliman’s The Man with Many Hats (2013) is the first novel to emerge from the Baghdadi Jewish community, centered in Calcutta.  It touches on many familiar themes – disintegration of the Jewish community, intermarriage, outmigration to India and the United States – but refuses to be defined by loss.  The final chapter, aptly titled “Home to stay at last,” depicts the main protagonist Rachel, and her mother, Sarah, reuniting in Calcutta in the home they once shared with Rachel’s magnetic but abusive father, Morris. It is Morris who is “the man with many hats” and his legacy, like that of the Baghdadi Jews is multiple and sometimes contradictory. The novel’s final words, “To Life!” serve as a powerful reaffirmation of the place of Jewish stories in India and in Indian literature – past and present.

Dr. Anna Guttman is Associate Professor of Postcolonial Literature at Lakehead University, Canada. She is the co-editor of The Global Literary Field and author of The Nation of India in Contemporary Indian Literature and Writing Indians and Jews: Metaphorics of Jewishness in South Asian Literature.