Photo-Essay: The Hidden Jews of Maharashtra

The Jews of India are India’s best-kept secret. For years, Jews in the rest of the world were ignorant of their existence. When I started studying the Bene Israel of Maharashtra years ago, the usual reaction in the West was: I didn’t know that India had any Jews! Indians, too, Muslim and Hindu alike, had little knowledge of their practices and beliefs, except for the Jews’ loyal neighbours among whom they lived.

The “Magen David” or Star of David is a Jewish symbol but also a Hindu one. However, in this Hanukka light celebrating the Jewish festival of lights, no mistake can be made: “Zion” in Hebrew is written inside the Star.

Jews at their peak in India in 1947 before Independence numbered 28,000, according to census material. Today, no more than about 3,000 Jews remain in India, the vast majority having emigrated to the State of Israel.

Things have changed in India. Globalization has had positive as well as negative effects. Tourism is on the upsurge. And tourists have discovered India’s Jews, along with many other “exotic” minorities in the mass that makes up India.

Except that something strange has happened. While the tourists and the Westerners have discovered India’s Jews in hidden corners of great urban centres such as Kolkata or Mumbai, many of the Jews have disappeared, just when they were being discovered! The ancient Jewish community of Cochin Jews in Kerala, whom some say came to south India at the time of King Solomon, is all but folded up. Seven individuals remain in Jew Town, Kochi, and another score at most are dotted around Kerala. Mumbai’s Jewish community is not in great demographic shape either, although here Jewish life continues unabated, interspersed with visits from gaping globe-trotters, who have to view Jews in India’s commercial capital first-hand.

This photo essay will focus on Maharashtra’s hidden Jews, off the main streets, enacting and re-enacting Jewish ritual as they have done since the first synagogue was inaugurated in Bombay in 1796.

Who are the Maharashtra Jews? They belong to two distinct groups: the Baghdadis or Jews who arrived in the nineteenth century from Iraq and other centres of Jewish learning, and the Bene Israel.

The Baghdadis, though only a few thousand in number at their peak before Independence, were less hidden than the Bene Israel. One of their founding fathers in Bombay, David Sassoon (1792-1864) and his family arrived in Bombay in 1832 after fleeing persecutions of the ruler of Baghdad, Daud Pasha. This wealthy merchantman, who founded a dynasty known as the “Rothschilds of the East”, was also named the Prince of the Exilarch.

Sassoon managed his international enterprises from Bombay, including trade in cotton, jute, and most significantly, opium. His commercial intuition and prowess, as well as the scope of his business enterprises, are well documented. One can find Baghdadis at every turn in Mumbai today, if one knows to look. David Sassoon peeps out at every passerby from the portals of the impressive David Sasson Library and Reading Room, built by Sir Albert Sassoon in 1847 and named after his father. 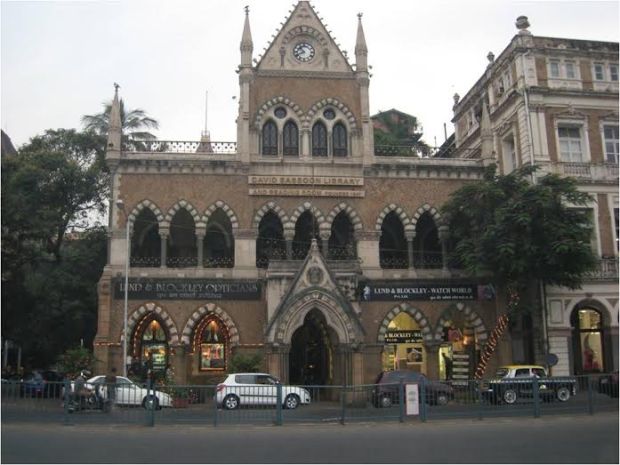 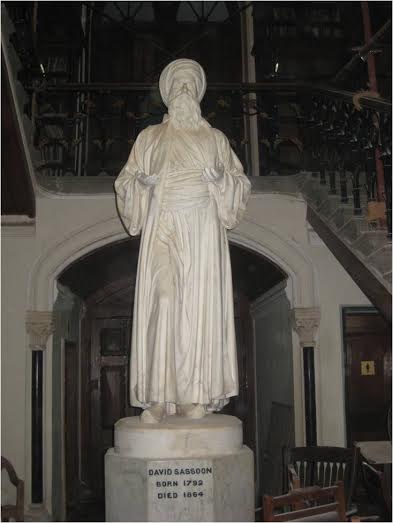 The main Baghdadi Jewish place of worship is the Knesset Eliyahoo synagogue, which is located   round the corner. Although this is a large and well-situated edifice, it is amazing how many Bombaywallahs do not know of its existence. Today, the synagogue is well guarded as a result of terrorist threats.

Inside, Mr. Solomon Sopher guards the ancient treasures of the synagogue, as if his own. The “Blue Synagogue” hardly has a quorum and yet on celebratory days, in the presence of the growing numbers of tourists, the synagogue appears to function.

The “other” Maharashtran Jews are the Bene Israel (“Children of Israel”), who  lived in the Konkan villages. According to tradition, they were shipwrecked off the Konkan coast, maybe in the year 175 BCE. Seven men and seven women survived and were offered hospitality by local Hindus and Muslims. With the advent of the British, the Bene Israel began to move out to the big city.

A monument, reminiscent of the Star of David, marking the point of arrival of the Bene Israel in Navgaon has been set up in the villages. It is not a “big” tourist site, yet Israeli diasporic Indians, who helped finance it, visit regularly.

With the gradual demise of the Indian Jewish communities in Israel, interesting things are happening. There is a concomitant renaissance. In 2008, the Thana synagogue, tucked away in a side street, underwent renovations.

The “Shaar Hashamaim” synagogue, which in Hebrew means the “Gateway to Heaven,” has been extended. 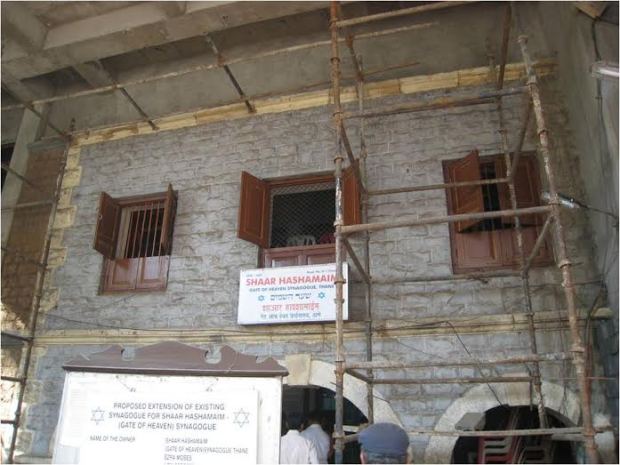 Today, the Thana synagogue, which is the gateway to the Konkan, a type of heaven, has become the single largest Jewish community in India. Congregants worship one God before the Holy Ark.

In these rare glimpses into Jewish life in Maharashtra, Indian Jews celebrate their belief in monotheism away from the limelight in a predominantly multi-cultural polytheistic world. As the tourists abound, the hidden Jews are slowly coming to light.

Dr. Shalva Weil is Senior Researcher at the Research Institute for Innovation in Education at the Hebrew University of Jerusalem. She has published over 60 scientific articles on the history, religion and culture of the Jews of India. She edited India’s Jewish Heritage: Ritual, Art and Life Cycle (Mumbai, Marg Publications, first published in 2002; 3rd ed. 2009), co-edited with Nathan Katz, Ranabir Charavarti, Braj M. Sinha, Indo-Judaic Studies in the Twenty-First Century: A Perspective from the Margin (New York: Palgrave Macmillan Press, 2007), and co-edited with David Shulman, Karmic Passages: Israeli Scholarship on India (New Delhi: Oxford University Press, 2008).