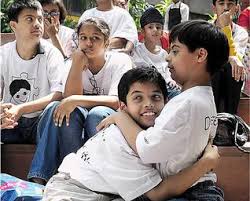 This article attempts to articulate the issues and concerns of the ‘marginalized amongst the marginalized’, namely, persons with developmental disabilities and their families vis-à-vis the debates around the RPD Bill. Specifically, it addresses the condition called ‘Autism Spectrum Disorder’ which has been variously (and mistakenly) portrayed as a ‘western’ malaise, the product of poor parenting  and a rare condition that affects only a miniscule section of the  population. The reality is that it is a neurological condition found across cultures and classes that is currently being diagnosed with greater accuracy and precision the world over, including India. The difficult and challenging behaviours that frequently accompany it, including self-injurious behaviours, uncontrolled displays of distress, and extreme sensory difficulties make it a highly stigmatizing condition for the affected individual as well as the family. Children with autism are denied admission to schools, regular and special; their prospects for employment and independence are abysmal and the omni-present fear plaguing their families is their fate once the primary caregivers are gone.

The emergence of family driven NGOs over the past two decades primarily to provide desperately needed services for affected individuals and their families has resulted in the raising of awareness about the condition, at least in urban pockets. The vast majority of children and adults with symptoms of autism living in small towns and villages are likely to remain undiagnosed and without access to basic education, training and rehabilitation and subject to various forms of abuse and neglect. While parent organizations have succeeded in putting autism on the ‘disability map’ in India, it is yet to be included within the ambit of any rights-based disability legislation. At the time the landmark PWD Act (1995) was framed, autism was a scarcely acknowledged category amongst policy makers and not included in the purview of the Act, whose most crucial provisions pertain to rights to education, employment, rehabilitation, and reservations for persons with identified disabilities. Persons certified by a medical authority as having at least 40% of the disabilities recognized in the Act are eligible for benefits and the ‘Disability Certificate’ is a much valued document, opening the doors to access and opportunities.

It is very difficult to obtain a disability certificate for autism, despite it being an extremely challenging condition which frequently takes a huge physical, emotional and financial toll on families. This further marginalizes persons with autism and deprives them and their care-givers from accessing tax exemptions, railway concessions, educational accommodations and the like, which might have given some relief.  Some make do with certification for mental retardation. However, autism is one of the four conditions along with mental retardation, cerebral palsy, and multiple disabilities that come under the purview of the National Trust Act of 1999, which is basically concerned with issues of guardianship and protection to persons with high support needs. Attempts to amend the PWD Act over the years failed to materialize; however, with the ratification of the UNCRPD by India in 2007, it was decided to harmonize the existing disability legislation in the country with the UNCRPD by drafting a new, comprehensive disability law.

It is appropriate to point out here that the CRPD is premised on a western-liberal rights based model that privileges the rights of the individual. The socio-cultural milieu in India, however, is based upon a more ‘socio-centric’ model, where individual autonomy is often subsumed within familial and community obligations and inter-dependence. This is particularly the case with persons with disability for whom family care and support assume greater salience in the absence of state mandated systems of social security. The special needs of persons with autism and other developmental disabilities are particularly complex, as the ability to take ‘rational’ decisions and exercise agency that are assumed under a rights based liberal framework become problematic. The role of care-givers and family as critical stake-holders must therefore be acknowledged and addressed. As an ‘autism parent’, who has engaged with the nitty-gritty and everyday toils and triumphs of caring for and about a person with autism, I offer a perspective on the Bill that may differ from the perspective of disabled self-advocates. These views by no means intend to undermine the rights of persons with disability or contend that persons with some kinds of disabilities are ‘incapable’ of making their own decisions.

The Ministry of Social Justice and Empowerment constituted a committee comprising stake-holders across the disability sector to draft a new Bill in compliance with the UNCRPD. The Centre for Disability Studies, NALSAR University of Law, Hyderabad, compiled a Draft Bill in June 2011. However,it drew a great deal of criticism from many quarters and was subsequently replaced by the draft ‘Rights of Persons with Disabilities’ Bill’ in 2012 which was by and large acceptable to most stake-holders in the disability sector.

It was believed that the Draft bill approved by the Cabinet in late 2013 would be substantially similar.  However, when a copy of the draft appeared in the public domain, it became apparent that it was a considerably watered down version, containing a number of provisions that were unacceptable to the disability sector as a whole. The sector, which had lobbied in unison in December 2013 for the speedy passage of the Bill in the last session of Parliament of the Government of the day, was split down the middle. One section argued that the RPD Bill 2014 was in total violation of the letter and spirit of the UNCRPD; another section felt that it could be salvaged by including a list of ‘non-negotiable’ amendments which were agreed to by the government.

The stakeholders in the ‘developmental disabilities sector’, which included the autism sector, by and large supported the second viewpoint as the Bill was far more inclusive in its scope than the PWD Act and included a number of hitherto neglected disabilities including autism. They agreed that it was by no means a perfect Bill, but lobbied hard in its favour, because so much time had been spent in bringing it to this critical stage. A national election was round the corner, and disability, always a marginalized issue in the public realm, would once again disappear from the public radar and those unrecognized disabilities which were on the verge of finding inclusion would once again be left out in the cold.

As matters panned out, the Bill was not passed in its present form in Parliament and was referred to a Standing Committee. Multiple controversies and acrimonious debates between senior activists and leaders of disabled people’s organizations, vociferous protests and dharnas for and against the passage of the Bill exposed the sharp cleavages within the sector. An unfortunate fall-out of these is the perception that the ‘care-giver/NGO lobby’ is not really in favour of ‘rights’ for the sector and would be content with a substandard bill in the short term rather than wait it out for that ‘perfect’ Bill to materialize at some unspecified time in the future!

The clauses in the Bill related to legal capacity and guardianship in particular drew a lot of flak from activists who felt they fell short of the CRPD ideal of full legal capacity for all persons irrespective of the nature of their disability. However, many in the autism and intellectual disabilities sector argued that adequate measures must be in place to ensure support and guardianship. There are people who will always need a high degree of care and support and for whom ‘full legal capacity’ means little or nothing. For persons with particularly challenging disabilities and high support needs, the denial of guardianship or any delay in appointing a guardian may expose the person to abuse and enhance his/her vulnerability. While independence and autonomy are laudable aspirations, dependence should not be stigmatized either. Suitable systems need to be worked out that ensure that those who need care get it. The provisions of the National Trust Act (1999) must be appropriately incorporated to ensure that the ‘invisible’ disabilities like autism do not get written out of the RPD Bill

There are also debates on the issue of reproductive rights. There is a sub-clause in the Penalties and Offences section of the Bill, which states that anyone performing a medical procedure to terminate the pregnancy of a disabled woman against her consent will be punished except in severe cases of disability. Activists argue that this can be misused as it does not specify what ‘severe disability’ is and, therefore, all disabled women potentially stand to lose their reproductive rights. The issue of reproductive ‘rights’ is a, particularly, contentious and delicate one with no ‘correct’ answers or prescriptions. The Chandigarh ‘Nari Niketan’ case (2009) and the landmark legal judgment that upheld the ‘right’ of an intellectually challenged woman to bear a child after a custodial rape is often cited by disability activists. All the same, the complicated issues of ‘consent’, being able to ‘understand’ what pregnancy and motherhood entail cannot automatically be assumed in the case of all persons with disabilities like autism. The law must protect such vulnerable women from the risk of abuse and violation of their bodily integrity and have mechanisms in place that empower guardians to make well considered decisions about their wards.

The entire Bill, argue some activists, smacks of a ‘welfarist’ approach in which the Government is doling out charity rather than ensuring empowerment and rights. This argument does not wash when one thinks of the vast numbers of the disabled population that are currently out of the ambit of state policy who are struggling on the margins, waiting desperately for recognition and social support .

As the caregivers of persons with complex disabilities like autism, we are too busy with our daily routines and managing one day at a time.  However, we have another major duty as activists and advocates for our children. The needs, aspirations and subjectivities of some people with disabilities may be completely different and not easily accessible to those who do not live and work with them. Care-givers can bring this much-needed nuance and appreciation of the heterogeneity of the disability experience and work towards the day when our children are able to lobby for themselves.  The language of ‘rights’ is meaningless unless it is backed by an ethics of care and caring practices.

Shubhangi Vaidya teaches at the School of Interdisciplinary and Transdisciplinary Studies, IGNOU. Parent of a teenager with disability, she combines research and teaching with advocacy for the rights of persons with disability and their families.