‘Roshogullah in a plastic plate’: Bengali migrant workers in Gurgaon

I have friends in Gurgaon from all regions of the country. I love visiting them, especially to get a taste of cuisines they have to offer! However, the Chatterjees are special. You enter their home and, for a moment, you feel as if you have just landed in Kolkata! “A Bengali always remains a Bengali,” says Mrs. Chatterjee, who is always seen wearing the typical saree and the prominent sindoor. I have visited them while they were in Bengal. It seems nothing has changed for them, except that the kids speak “Delhi-style” Hindi!

I co-founded Agrasar in 2010 and have been working with various communities in north India. At Agrasar, we are working on enhancing the employability of underprivileged youth and connecting them with social security services. My experiences with the Chatterjees made me curious to know what this millennium city has done to the “not-so-privileged” Bengalis and their lifestyle.

The millennium city of Gurgaon has been at the forefront of the ‘India Shining’ story. In last fifteen years, the city has seen development and construction happening at a breakneck pace. The stupendous growth has attracted people from every part of the country in search of growth and prosperity. Besides the engineers and MBAs, for whom the city epitomizes rapid professional and economic growth, Gurgaon has also become a preferred destination for people living in rural and small-town India.

Chakkarpur is one such colony that has witnessed a major demographic shift, as it has been flooded with migrants, especially from the Nadia and Murshidabad region of West Bengal, in last few years. Now, Chakkarpur is popularly known as the area from where the domestic workers, ayahs, drivers, and cleaners come from and serve the nearby affluent families. The situation inside Chakkarpur is sharply in contrast with the surrounding residential area. Basic hygiene facilities are poor with drains flooding the area. Families stay in single rooms in overcrowded localities. These are the families who have once lived in open spaces and fields in the floodplains of the Ganges. Most of them have migrated as they were left with no other option to survive with increasing families and decreasing lands.

Once you enter the colony, the first thing you would notice is the pervasiveness of signboards in Bengali. But, no need to worry. You would be able to talk to most 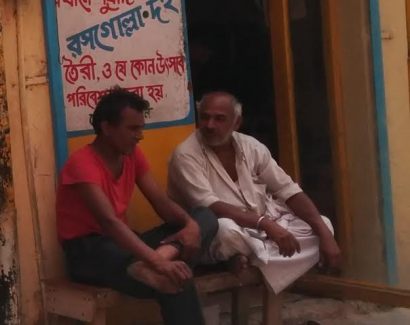 of the people in Hindi, except those who have recently migrated. A decade back when they started migrating to the villages, dominated by the Yadavs of Haryana, the language used to be the first barrier. People from Bengal could hardy speak or understand Hindi. Whatever little vocabulary they had was from the Bollywood songs they used to listen to in their villages. The language was a barrier even to get jobs. This is the first major adaption people are forced to make. A person speaking in fluent Hindi with a typical Bengali accent is a common sight nowadays. But, don’t be surprised if you come across a local vegetable vendor who would understand Bengali and even ask, “kaamon aachen?” The signs are still in Bengali because the women, who mostly worked as domestic workers, never felt the need of learning to read and write in the local language.

Here, Bengalis don’t eat rice as a staple diet now! The rice, which they get to buy here, is a Kachcha white rice which they have never seen in their villages. They used to eat the pakka yellowish rice, which they could hardly find here. In Gurgaon, they prefer chapattis to rice not just because the yellow rice is not easily available but also because chapattis can easily be carried to 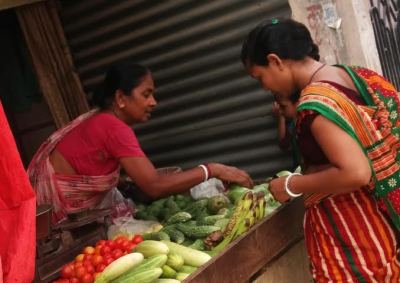 their work-place without the fear of it being spoiled. A person living in Chakkarpur for the last five to six years would mostly eat chapatti and would cherish rice along with fish on special occasions. Near to the village is a big fish market, which never existed a few years ago. The local businessmen were smart to see the opportunity and set up the market. The fishes are easily available now. In Gurgaon, a non-vegetarian would usually eat chicken. But now, many locals could be seen buying fishes from the market.

“I do not like roshogullahs here. In our village, we get the original roshogullahs unlike the artificial ones available here. The roshogullahs in villages were made of milk, but here they use paneer instead. A roshogullah is complete only when served in a mud pot. And that too from the mud obtained from the Ganges. Here, it is served in a plastic paper. I feel that I am eating a sweet sponge made of plastic,” said Tapan, 26, echoing the voices of many.

Ripe Jackfruit, which is actually eaten as a fruit in Bengal, is not easily available. The fruit, which would pluck from trees outside their homes, has now become a pricey delicacy. They normally have to pay for the stale vegetables instead of the fresh one they used to get free from their fields.

Many festivals like the Ganga Pooja, Mansha Pooja, and Laxmi Pooja are missed because they have now adapted to the Roman calendar from the Bengali one. They get to know about a Pooja, which has just been missed, when they call up homes. However, the Durga Pooja is never missed. The people celebrate the festival with equal enthusiasm. Young women celebrate with more verve, as they are not being watched by their elders, unlike in the villages. They pool in money and start preparing for the Pooja a month before, as is usually the practice in their villages. Traditionally, the Durga idol is made from the sacred mud from the Ganges. However, they don’t have any choice now, and the mud from the Ganges has been replaced by the mud from Yamuna. Religious sentiment in this regard is comforted by the token mixing of mud from the Ganges with that of the Yamuna.

The village locals, too, have started attending the Poojas. Earlier, it was more from a festive perspective than any religious sentiments attached to it. But now, they come to the pandals, and even offer prayers to the goddess. They seem to have recognized her as their own. Many have stopped doing daily prayers at homes. After a long hard day, they hardly get any time for prayer. Moreover, the water is scarce and they can’t do prayer without taking a bath. The recent migrant families adapt very easily to the changes, as they see nobody doing the rituals in their vicinity.

Many of the women have stopped wearing sarees now. They are asked by their employers to not wear “indecent clothes”. “Madam told me on the very first day that I should not expose my waist so much. This might attract the men at home and, then, there will be problems. I never felt this way before. I used to think that women in the cities are more liberated. That made me think otherwise,” averred Moushumi, 25, echoing the voices of many young women in Chakkarpur.

The women, even the married ones, have started wearing suits. A few young married girls can be seen in jeans and they talk about this change with a feeling of liberty and pride. But, they miss the “real” Shakha Pola – a symbol of marriage for the Bengali women. Shakhas are white bangles made of conch-shells and pola are the red ones made of corals. In Gurgaon, these bangles are made of plastic. The same plastic which is used in making the plates to serve the Roshogullahs.

Ah! a lot seems to have changed for my Bengali friends living in these colonies. They do not have the luxury of remaining connected to their roots as the Chatterjees have been able to. They cannot make a visit to Kolkata or their villages every quarter, just to update their wardrobe and to purchase spices! They cannot purchase the original Bengali items, which are available in Gurgaon at a huge premium. They also do not have the freedom to wear what they desire. They have to eat Roshogullahs in the plastic plate because they can not bring along the revered Hooghly with them.

Prerit Rana is the co-founder and CEO of Agrasar, a non-profit organization working in the field of human capital development and social security of disadvantaged communities in India. His job frequently takes him to the rural areas, tribal villages and slums in the country and he is always fascinated to meet people from diverse backgrounds and culture. He loves to write and share his experiences from the field through his blog: quietlyreflecting.wordpress.com. Lately, he is also learning documentary filmmaking.

Tags: Capitalism, India, Labor, Migration
From: Issue 9/Inland Labor Migration in India
← Contents – Here and There: The Diaspora Universe (Issue 8)
Women’s Mobility and Migration in Jamia Nagar: An agential approach →
No comments yet