Jawaharlal Nehru University (JNU) in New Delhi is one of the best universities in India. Its huge, green campus is situated in the southern part of the capital and is supposed to breed the most promising, very often leftist, minds of the country. In 2012, it was given the highest grade awarded to any educational institution in the country by the National Assessment and Accreditation Council (NAAC) of India.

The fame of this university is spread not just in India but in the entire South Asia, from where it attracts a large number of students, not to mention students from other parts of the world. But the campus’ population is not exclusively composed of the professors and their families, students, and administrative personnel. A large number of unnoticed people live inside the university campus and within its premises as well: the migrant construction workers.

JNU is in continuous expansion and, obviously, the construction of new infrastructure is imperative to fulfill the growing requirements in terms of number of classrooms, hostels for the students, apartments for the professors and their families, and guesthouses for visitors and external researchers. Several different construction companies are in the contract of the University and, as all construction companies in India, they avail themselves of a large number of low-wage migrant workers from impoverished and rural parts of the country (Bihar, Jahrkhand, Chhattisgarh mostly, but also West Bengal and Orissa) seeking to make a living for themselves and their families even under the most deprived conditions.

Walking inside the campus, one can spot their children playing, filling bottles of water or taking care of their younger siblings, while their parents are at work at the construction sites. At the moment, there are two informal settlements of construction workers in the campus – proper jhuggis (slums) with no toilets, tapping water and electricity from the university because they are not granted legal accommodation and public services by the government, the university or the construction companies. The number of families in these settlements varies constantly, depending on the particular demand for workers, and so the number of the construction workers’ children inside JNU campus keeps fluctuating, too.

When I first arrived to JNU, in 2009, I found this reality almost shocking – a small world of deprivation within a larger world of research, knowledge, and, ironically, political activism. How can the supposedly most educated people of India happily pursue their studies while next to their doors these children hardly understood the meaning of school or education? And I was not the only one asking myself this question.

A couple of my seniors at the history department (Centre for Historical Studies) were part of a group of concerned students who met every afternoon to informally impart the children of the construction workers elementary education. The International Students’ Association (ISA) let them use their meeting room during the week-ends where the children, more or less 50, assembled every Saturday and Sunday afternoon to receive their bits of education. I joined them and we started together our little, chaotic, difficult, but fulfilling, and – let me proudly emphasise – promising project. We started Unnoticed, a platform of JNU students and alumni that aims at helping the construction workers’ families in JNU campus to make use of the right to education of their children and ameliorate their conditions of life.

The name Unnoticed came up almost incidentally. But now, when I ponder over it, it defines the spirit of the work that we are doing. With time, need for better coordination of our activities was felt and we formed a mailing group with the name Unnoticed to organise our activities, putting off the decision for a formal name for our association for the time being. There were more important things to do – the name could wait. We enrolled the children in the nearby state-run schools, we gathered money to rent a school-bus, we organised our time-table more carefully, so that the children could go to school in the morning and come to us in the afternoon, for both curricular and extra-curricular activities. 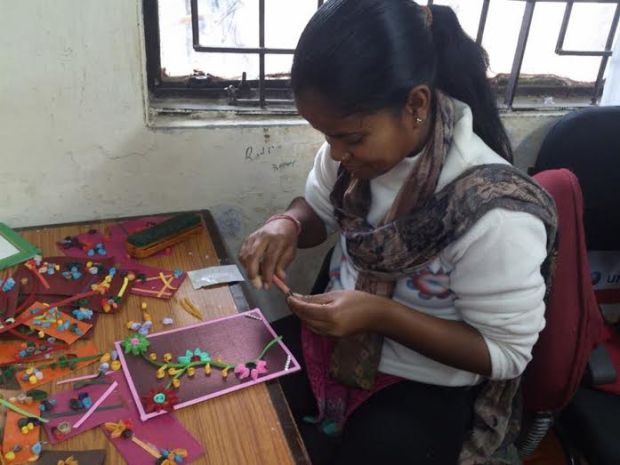 Our work gained momentum and JNU administration noticed it and helped us. The vice-chancellor allocated two rooms to our organisation, which became our permanent classrooms. We received 8 computers from the European Union Delegation to India and Bhutan. We organised numerous photo workshops and exhibitions, with students, external photographers, and also our children. We sold a great amount of photos to sustain our projects. We organised health and vaccination camps within the settlements and linked up with a dentist in the nearby area of Munirka, where our children got free dental treatments. We got constant support from abroad, especially from Germany, where the mother of a foreign student pursuing an exchange programme in JNU does not miss a single chance to help us financially and to promote our cause abroad together with her students at the Gymnasium Adolfinum in Moers. We teach the children dance, singing, and acting. The performances of our children in JNU Campus are innumerable. As time passed, we decided not to change our provisional name – Unnoticed – because it really imbibed the essence of our work. We wanted the children and their families to stop being unnoticed and become visible.

Although we have been able to make some positive difference, the challenges ahead are multiple and growing, and the efforts required to meet them are huge. The number of reliable volunteers to guarantee a good quality and continuity of classes is still insufficient as many students join the group for two or three weeks, leaving it once they have to study for an exam or write a paper. Many love to play with the children, but very few can commit to organising an effective class and constantly dedicating three or four hours per week to teach. Furthermore, the ex-students like me, having an office job which keeps them busy five days a week, cannot contribute with their time and resources as before. We are still a long way from achieving our goal. 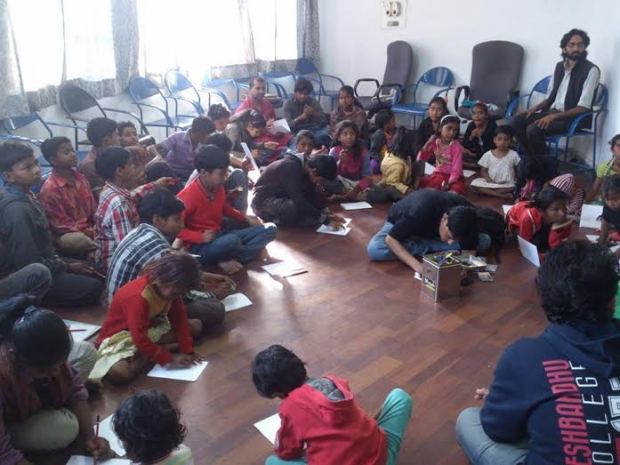 Our last important project, an informal collaboration with the Delhi Department of Labour, illustrates very well our challenges. In this project, we helped workers within JNU Campus and in other parts of South Delhi obtain their labour cards from the department, which would give them access to scholarships for their children, free healthcare and insurance, retirement provisions and a number of further social support measures. Some of our volunteers worked hard, going from settlement to settlement, helping the workers to get their passport photos clicked and to fulfil the numerous requirements that a government scheme often imposes on its citizens. Time, phone calls, and money were spent by the volunteers to act as a bridge between the workers and the public social welfare system. The result was noteworthy – more than 50 construction workers got included into the scheme – but at the same time the potential of the students who took part in this project has not been fully acknowledged.

Obtaining the labour cards is not enough for the workers. Different applications have to be written and submitted to the Labour Department to get various social security entitlements connected to them. The majority of the migrant construction workers can barely write and read and they are not able to fill out the application forms themselves. They do not know where to submit them and they face difficulties moving in the metropolis on their own, coming from small villages. Furthermore, the risk to get stuck in the bureaucratic machine jumping from one place to the other and wasting days of work, hence precious money, is a high probability. In addition, gender prejudice among the workers’ community is strong, and women would rarely leave the settlements alone to reach a government office by themselves.

Many workers, thanks to a word of mouth, got to know about our commitment and contacted us because being immensely marginalised, this was a rare opportunity for them to get included into the government scheme. Authorisation of the employer is required to obtain the cards and, when asking for them, the workers are often subjected to bribe or blackmail, with little bargaining power.

Gaurav, a 25 year-old research student at JNU and volunteer at Unnoticed, who has been at the forefront of this project, received over 100 calls from different workers asking for help. “How do I get the labour card? Where are the forms? What am I entitled to? I did not get my money…What if I move back to Orissa? Will I lose my entitlements? Can you come with me to the office?” are only some of the numerous questions he was bombarded with.

We, as Unnoticed team, would really like to take this forward. We think students have great potential and capacity to be a solid bridge between the government and the people. We are committed and energetic. But this is not enough. Calling the workers, spreading the information about the scheme, going from one settlement to the other, taking photos, etc. are activities which require money. They also require time. Time that many students would rather use to read, write, learn, build a career, or even hang-out with their friends, which is a very important activity at their age!

So, why not recognise the driven individuals’ value and their potential? Why not develop a systematic approach to the problem of implementation of schemes for construction workers and partner with the socially aware community in Delhi and elsewhere to solve it?

Paid internships under different ministries and departments for young people who are committed to social causes could be a valuable solution. Students could study government schemes and promote them amongst the target communities. They could help the most disadvantaged people in their own society to get access to these schemes. They could become the link between the palaces of power and those left behind in the race for development. With small financial incentives, to pay for their expenses and their time, and a recognition which attests their work within the Government, students could gain grass-root experience and, at the same time, they could affect enormously the destiny of the disadvantaged in India.

This is our humble idea, still in an embryonic shape. We hope with time students’ innovations like ours could get out of the spectrum of charity and solidarity activities and, instead, become included in a more focused, organised and systematic social welfare vision, policy, and plan.

Maria Rosaria Centrone is a child rights consultant specialising in child protection. She has been working for different Delhi-based Non-Governmental Organisations (NGOs) for several years. Since November 2013, Maria’s focus has been on Child Labour issues in South Asia collaborating with the International Labour Organisation (ILO) of the United Nations. She has a Bachelor’s degree in Hindi Language and Literature from “L’Orientale”, University of Naples, Italy, and a Master’s Degree in Modern and Contemporary History from the Jawaharlal Nehru University (JNU), New Delhi, India. She is a founder member of Unnoticed: Children of JNU Construction Workers. Email: unnoticedjnu@gmail.com. Facebook: www.facebook.com/unnoticedjnu.