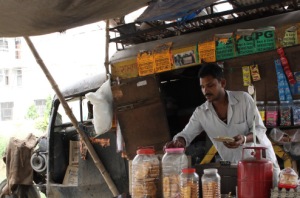 On the streets of Gurgaon, I met Gaurav. He had migrated from Jharkhand eleven years back and has been vending tea since then. Having sensed the opportunity, he has recently diversified his product range to confectionary items, cookies, and cold drinks apart from the regular “masala chai” for which he is well-known.

However, it has not been that easy surviving in the business. He was being frequently troubled by the municipality officials in the past, and, thus, got himself a “movable shop” – An old Tempo! Since then, whenever he senses any danger, he simply drives away his shop, only to return back later!

I thought of having tea at Gaurav’s stall again, but, unfortunately, Gaurav’s tempo-shop was found in shambles. I could only click a picture of the broken shop, with the hope that he will come back or have left for something better. The enquiry is on… will update. 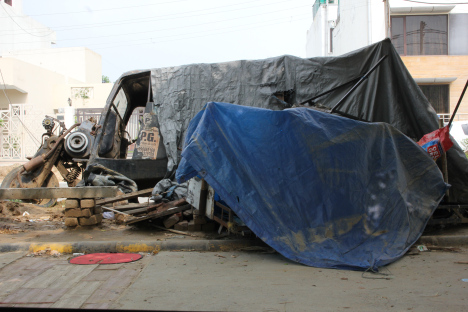 Prerit Rana is the co-founder and CEO of Agrasar, a non-profit organization working in the field of human capital development and social security of disadvantaged communities in India. His job frequently takes him to the rural areas, tribal villages, and slums in the country. He is always fascinated to meet people from diverse backgrounds and culture. He loves to write and share his experiences from the field through his blog: quietlyreflecting.wordpress.com. Lately, he is also learning documentary film-making.

Tags: Capitalism, India, Labor, Migration
From: Issue 9/Inland Labor Migration in India
← Blog Post: I am a sex worker and I am a migrant…
A tête-à-tête with Manoj, an enterprising tea vendor! →
No comments yet