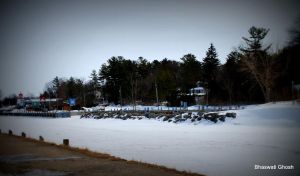 The first thing you notice about snow is that when it snows, it is generally warmer than when it doesn’t. Conversely, when it is sunny, there is a certain brightness that is blinding. The sky turns a deep Neptune blue, deeper than the skies you would be used to in India. The air is fresh and has a chill that cuts right through to the bone, even when you’re well protected from the cold. If you’re driving, you notice strange streaks of white all over the asphalt road surface, patches that are not ice or snow, but a curious salty residue.

Even though December is the month when the northern hemisphere is slanted the furthest away from the sun, it isn’t the coldest. February is the coldest month of the year. Around February, even the warmer-when-it-snows theorem gets itself a corollary. The snow turns into hard pellets and you can hear their patter on the window panes and it doesn’t feel any warmer. Our one-year old, Aryaz, loved stomping on the tiny near-spherical balls of ice, just to hear the crunch under his little boots.

The story that follows is of one February night, our first February in Canada.

The weather update on the TV, slung high up on the rear wall of the restaurant, said it was -27 C outside, without the wind chill factored in, and -42 C with. Outside the large plate-glass front windows, the wind had picked up, making the sidewalk litter tumble along. This part of downtown Montreal, known as the strip, is perhaps the filthiest. The only difference between this section of the St. Laurent Boulevard and Mumbai is no one pees against a wall here.

After a while, the litter settled back and there was a brief lull before the sidewalk outside suddenly turned white, with those tiny balls of ice. Another blizzard was just beginning. Beyond the glass, it was now just a white swirl. The pole with the placard right outside the front entrance, that read 51-Autobus (Des Pins-Atwater), was now almost indistinguishable. I couldn’t see a soul out there.

“Wish I could split,” I said out loud. Didn’t matter, I was the only one there. Hector, my 19-year old nightshift partner, hadn’t turned up, and I was by myself, manning the joint alone.

My eyes fell on those yummy falafels under the counter.  I took two out, heated them in the microwave, slapped a dollop of humus on the side and sat down in a corner with a plastic fork.  I was kidding myself, of course.  I wouldn’t split, I needed this job. And the graveyard shift, 10 to 6, was the only one possible, what with the French course running till 9.15 p.m.

It was now 4.30 a.m.  The drunks from the bars down the road had staggered in, gorged and left. The drug-addled fences trying to hawk GPSs and cameras were gone. This was the downest part of downtown. You could get anything you wanted here at a price.

An old woman came in with a scrawny homeless guy in tow. She held out a tenner and said, “Please, can you prepare a full plate for this man here? He was sitting outside the metro. I have to rush, thanks.” She flashed a smile and made an immediate exit.

Soon as the lady left, the guy stepped forward and said, “I don’t want no chow, man; just give me the dough she gave you, okay?” No skin off my back, I passed the tenner to him and he shuffled out. I rose and locked the front entrance doors after him and brewed myself a coffee.

We always locked up after 4.30 a.m. for security reasons. The restaurant would still be open for business, but you would have to pass my scrutiny, to be able to enter. This was an all-night joint in a scary part of town, closing only from 6 a.m. to 7 a.m. for a thorough clean-up, which meant doing the dishes, cleaning, sweeping, mopping and cleaning out the toilets (you should have seen the state that the drunks left the toilets in). With Hector absent, all this would be accomplished by yours truly in the morning before I closed up and left.

I was sitting well back in the shadows of a recess next to the cash register and as I sipped from my mug, a wave of melancholy swept over me. Last week, the money we had brought along with us had run out, and there was still no decent job in sight. We had been forced to downsize to a tiny one-room cubbyhole. When you folded down the bed, your nose bumped against the kitchen counter. On Fridays, our neighbors, a Pakistani family, cooked biryani. Fridays smelled good. Better than the tinned stuff we opened day after day.

And here I was. The fact that there were more PhDs among my restaurant waiter immigrant colleagues than inside McGill prevented me from plunging into complete withdrawal and defeat.

I must have dozed off, I don’t know for how long. But as I sat in the shadows, my tired eyes began to notice this hooded form of a person. He was leaning against the locked glass doors, while around him the blizzard had turned into raw mayhem.

The figure outside the glass was rocking back and forth. I couldn’t trust my eyes but he appeared to be in just a T-shirt. Hands outstretched, he was trying to tap on the glass and steady himself at the same time, against the howling wind. As I hurried toward the front doors, a voice inside me began telling me I was being a schmuck. This could be a hold-up and I shouldn’t be opening the door to this creep. I should be calling 911 instead. There must have been around a grand in the till. On the Strip, restaurant servers got shot for much less.

As I approached the door, a sudden gust sent the man sprawling on the sidewalk. His cap went flying, his hood came off, and it was then that I realized it was a she. A mass of dark brown hair cascaded down to her shoulders as she lurched back up to the glass. She seemed to have just socks on.

Scrambling desperately, I unlocked the doors. They swung open with such force that I was knocked clean off my feet. I got up, ran across and helped her in from the blizzard. And then, pushing my whole weight against the doors, I slammed them shut.

She was cold, real cold and as I held her, she shivered uncontrollably. I sat her down and brought in the spare hooded parka from the employees’ closet and draped it round her. She smelt awful but I somehow managed to hold her tight allowing her body to get warm. Gradually the shivering passed.

I moved her to a corner table and reached for the phone, “I’ll call 911, hang on” and the next thing I knew, she had her hand clamped over my wrist. “No, please,” she whispered. There were multiple puncture marks running down the sides of both her arms.

“OK, relax, take it easy, are you hungry?” She nodded and after a while, I had a nice heaped plate of shish tauk, humus, fries and salad laid out in front of her. And a steaming glass of coffee. As she wolfed the food down, I couldn’t help noticing how pretty she was. She couldn’t have been more than 14, maybe 15. The eyes guileless, the bluest I’d seen. The hair, all messed up. Auburn-brown. The hood of my parka encased an angel.

When she was done eating, she looked much better. “I don’t have any….cash,” she said, “but if you want…we can…I can…you know…I’m good, really good.”

I tried not to show the consternation I felt, at what I’d just heard. I simply shook my head. “It’s on the house, relax. Try to get some sleep” is all that I could manage. She laid her head on the table surface and was out like a light in no time. I balled up a couple of clean aprons, lifted her sleeping head gently and slipped the makeshift pillow under.

It was just past six and I was cleaning the serving counters and getting ready to close up and go home, when the girl stirred. She padded up to me in her socks and kissed me on my grey bearded cheek. Even though she smelled yucky as hell, it was hard for me not to smile.

“Sure, it’s that way, to your right,” I nodded toward the back. I hoped she would be done and ready to move out soon. Ben, the owner, would be in any minute, to start the daily ritual of getting the restaurant ready for the first customers. I didn’t want to have a lot of explaining to do.

She didn’t take long, and I couldn’t help stealing a glance when she emerged from the washroom. The grubby face with dried snot was creamy and radiant now, the curls luxurious, swathed around her face and the eyes guileless and beautiful. If I had the means I would adopt you, I thought.

She didn’t mind waiting as I closed up, and soon we were both on the sidewalk. She looked comical, a pixie, in the large shaggy parka and those huge old snow boots an ex-employee had left behind a long time back and never returned to collect. In one hand, she was holding a brown paper bag filled with shish tauk and fries that I had prepared for her to take along. In the other, she clutched a 5 dollar bill I’d given her.

We stood there, at the bus stop, not saying a word. The wind had subsided, but it was still bitterly cold. After a while, the 51 came up Des Pins and grunted to a stop and the doors sighed open. She was about to get in, when she hesitated, as if she wanted to say something. Then she turned and with a brief wave, disappeared into the bus.

I stepped off the curb to cross over to the metro entrance, when the bus turned the corner. And I wondered if she would turn hers.

I was sure I would turn mine. Someday soon.

Tags: Diaspora, home, memory
From: Issue 8/Here and There: The diaspora universe
← Jet Lagged Kolkata Night
Scattered, walking: The point of no return →
One Comment Post a comment