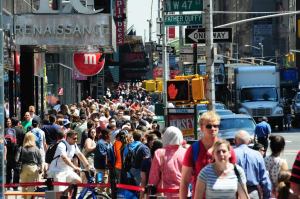 The idea of a break away from home had been growing inside me.  The imagery of travelling like a gypsy, being with strangers was very appealing, beckoning.  I wanted to be a nomad, with no home, no responsibilities—just freedom. So I landed in the world’s melting pot, New York, and was blown away by the energy the city exudes—China town, Little Italy, Soho, the village, Harlem, Brooklyn, Long Island! The variety of character New York offers makes it an explorer’s delight.  As I make myself ‘at home’ with Indian friends here, their references and inputs become integral to my experience of this place.

Indian diaspora in America constitutes of people who have made a conscious choice to leave India for better opportunities. These are not people who are traumatized to be away from their homeland; in fact, for them there is very little nostalgia about things “back home.” On the contrary, their holidays in India reinforce the belief that they are living a “better” life in the U.S.  This is often quantified by their explanations about quality of life, which includes education, law and order, health, professional growth and most importantly a ”system,” a “system that works.”

During a tea session, I heard many people narrate instances of lawlessness in India. Sehar, an Indian woman in her early 40s shared an instance from her last trip to India. “My sister and I were chatting late into the night when we realized there was a thief in the house. We raised an alarm; everyone, including the neighbours, woke up, and finally the thief was caught.  I tried calling the police; they did not understand English, so I spoke in my broken Hindi. The police asked us to wait, but did not arrive for three hours! Imagine holding a thief for three hours!” And then the conversation moved to many other instances of looting, rioting, killings and rapes that take place in India.  Everyone at the gathering seemed to know someone whose relatives or friends were mobbed or killed in riots.

”Lynching never happens in America, not even after 9/11.”

“It happens in India because you can get away with it.”

”There is no accountability in India. In America you will be caught and jailed or at least put to trial.”

”There is a system here that applies equally to all.”

”In India, there is no safety, no security, women can’t go out late in the evening…”

By now Ruby, another friend, had noticed my discomfiture and came to my rescue by drawing the complainers’ attention to how these observations stemmed from selective news reading.  But I questioned myself and agreed that in India, one man’s freedom does get in the way of another man’s freedom.  Doesn’t that happen in America too?  However, the response that came to my lips was , “India is a new democracy compared to America, we are only 65 years old, whereas the American democracy is more than 200 years old.  We also have the baggage of Partition – Pakistan and Bangladesh – thus the inherent tensions.”  I was encouraged by the silence to poke further, I teased, “How was the American democracy as a 65-year-old?  Of course, those were different times. But still?”

“No, no this is not a valid comparison,” remarked Imran, originally from Aligarh.

I argued further, “The Indian constitution granted Indian women the right to vote much before American women could vote.”  Soon I realized that women’s voting rights or wages were not a big deal to Indians here.  What might have sounded an astounding fact to a liberal American was hardly of importance to our diaspora community.

Another day, another house. We were watching a film on a projector screen with the best of speaker systems, outdoors, at night. I was pleasantly surprised with the arrangement. “This isn’t possible in India—your own stereo sound, full screen theatre, anywhere, anytime, any movie.” “Yes,” I agreed with Rakesh, our host.  As I refilled my cup of tea, Rakesh took me to his garage, showing me his new car, a BMW series 5, “latest model”. “Even this would not be possible in India.” I laughed and Rakesh was honest enough to laugh with me. “Yes, indeed,” he agreed.  “You see, hard work pays better here,  and just look at the quality of  life here—the schools are excellent and free, no power cuts, no traffic jams, look at the roads, even in the worst of snowstorms, the roads don’t close,  food is much cheaper, there is dignity of labor, I can be a truck driver and  no one will look down on me, no safety issues – my family is safe when I am away plus my kids will go to the best universities in the world!” And suddenly life seemed so well-sorted to me!

I was left thinking of the innumerable times when we had blocked highways, protesting against the government, demanding some right or other. On all those occasions we occupied the roads, and brought the traffic to a standstill. Even my 13-year-old was part of rallies. Would Rakesh and his children ever think of protesting and rebelling against, or reclaiming, anything? Perhaps they don’t need to. As Sehar would lovingly put it, “It’s a hassle-free country, sister! Welcome to America!”

Amazingly enough, not one of the Indians I’ve met here, wants to relocate to India.  In fact, Narayan surprised me by asking, “Given a chance, would any Indian refuse to migrate to the U.S., especially middle-class Indians?”  “Ah yes, many would jump at the opportunity,” I said. “Many? Or all?” he grinned.

My interactions were mostly with people in their early 40s.  Only one of them had migrated here as a teenager, others were all first generation migrants with school-going kids. How big a factor kids’ education is in America can be gauged by the localities Indians are living in. All Indians I met chose to build their houses in areas with high school ratings, thereby ending up in white neighbourhoods. The only exception to this was Sanjay, my college class mate, originally from Bihar, who has been living in New York for the past 14 years. He is the only one sending his kids to a school in a black neighbourhood in Brooklyn.

Kids born in America to Indian parents are as far-removed from India as any other American kid. The only difference in their upbringing is the additional baggage of ‘moral values’ that their parents try to instill in them through religion. Indian Muslims’ kids go to Islamic schools on weekends; Hindu kids attend temple prayers. Religion is adhered to more strictly than in India. “Is it an identity issue?” I asked. “You can call them family values,” argued Gauri, explaining why they keep the kids within religious boundaries. “The Americans don’t have a family system. It’s all about the individual here. American kids are very independent; once they leave home, they meet with their families only occasionally. I want to teach my kids to support each other. They may not be there for us, but at least between the two of them, they should have a strong sense of bonding.”

I was tempted to ask how they would react if the child grew up to be a gay or a lesbian. In America, these are legally correct identities. The reactions of the Indian diaspora to such issues are more or less answered by the “us and them” divide — “It’s their culture, they have open lifestyles, it’s okay for the mother to be living in with her current boyfriend while taking care of her children from a previous marriage. Their children are tuned-in to these situations, but Indian kids have not seen that happening.”  Future is an unknown frontier, but Indian parents seem to be doing their best to keep their Americanized children on a straight path, mostly with the help of religion. It’s not just a matter of coincidence then that the Indian diaspora here (those in their 40s) are still living out their arranged marriages.

Interestingly, none of my friends were close to the black Americans. I tried hard to fix a visit or a casual meeting with a black family but nothing ever materialized. Instead, my Indian friends counseled that it wasn’t safe to hang out with blacks. “A lot of them are drug addicts,” my pals reflected the stereotype, while adding in the same breath; “the beauty of America lies in its acceptance of all races and cultures!”

Perhaps this duality is what characterizes Americanized Indians – when Indians criticize India, they don’t forget to point out how Americans are fiercely patriotic, they talk about the lack of choices in India but ignore the fact that culture of choices has also given birth to extreme consumerism in America; they point to lack of infrastructure in India but do not notice the missing public transport system in the world’s most “developed” nation.  They talk about social security benefits but do not miss the “social fabric” that cradles a society.

Or is this just a way of setting up a new home away from home?

Sabiha Farhat is a documentary film maker from India. After completing her Master’s degree in Mass Communication from MCRC, New Delhi, she worked for mainstream television channels.  She chose to direct feature shows over news reporting. During this phase, she covered subjects as varied as health, women, culture, art, cuisine and lifestyle. Gradually her content shifted to political issues, which led to her growth as a documentary film maker. Here again, she produced films on varied subjects, including street children, homeless people, tribes, disasters, identities, communities and more. Lately she has shifted to writing fiction.