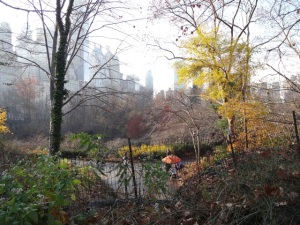 Even for a serial insomniac it was a particularly sleepless night. Did I know tall buildings were falling on the other side of the world? Was it tribal connectedness? Or simply the end of 20-year-old marriage? Whatever, I had cried and kept awake all night. But quietly, because a freshly abandoned teenage daughter slept fitfully beside me and if she saw me cry she would think I was miserable. And that wasn’t true. All I had done was ask her father to leave. I had told her everything was going to be alright in a clear strong voice when she wept in my arms. Well past midnight I had crawled into bed with her, snuggling up to her as if she was a child again.

Early the next morning, my soon-to-be-ex-sister-in-law phoned from London.

‘Isn’t this just awful? I don’t know what’s going on anymore,’ she said. ‘How can people do this to each other? Oh, this is unspeakable, and I wish I was closer to you, closer to home, so I could hug you. I really feel the distance. I need to be around my family. I must come home. Oh, this is terrible and now more than ever, we need to be there for each other. We can at least do that – can’t we?’

I thought, ah, her brother’s told her what I’ve done and she’s trying not to take sides but blood is thicker and all that. How can she say she’ll be there for me when I’m walking out on her brother, and by default, her?

She continued, ‘it’s unspeakable and I can’t believe this is happening. We are connected and this affects us all. What’s going to happen to us now?’

I wanted to tell her that we would still be friends after the shock had worn off but couldn’t find a voice. She kept talking and I let her concern envelop me, grateful for the crumbs, aware this was a reprieve, afraid for my future self, for my child who was not yet a woman. I sobbed and she said, ‘I’m sorry, carrying on like this. Don’t watch anymore. It’s too horrible. Switch it off. I can’t look anymore.’

‘Switch what off?’ I asked, swallowing a hiccup.

‘The TV. What do you think I meant? You mean you don’t know? So what – what’s going on? Why are you crying?’

I uncurled from the floor, shut the bedroom door where my daughter still slept, dark hair and one bare leg visible under a purple blanket and switched the TV on softly. They were doing repeats of a disaster movie on every channel over and over again in freeze frames. Buildings were on fire and people were running in the street, followed by explosions and black smoke. Still on the phone I asked my husband’s sister what I was looking at. And she, seven hours behind in London, told me the twin towers had fallen.

I turned the sound up; heard the screams. I was responsible for this. Evil bitch. Failed wife. Unfit mother.

The woman on the phone was still my sister in law. And she was still talking.

‘Oh sweetie, I’m so sorry. You’re not – you’re not thinking of leaving him, surely? I know things haven’t been great but I thought you guys were making it work, finally. Anyway, you can’t leave now. The world has just gone crazy. You’ve got to stay.’

Au contraire said the voice in my head. A great time to leave; who would notice a small craziness among big crazinesses? I told her it was too late, too late for me, too late for my child. She asked me to stay. Stay till she came home. Stay till she spoke to us both. And then we both cried, this time for the people jumping out of burning buildings and the great city exploding like a Hollywood blockbuster with real people who can’t wipe off the ketchup and have dinner with their kids in the evening.

That night I waited by the door with a suitcase filled with his clothes and told him he had to go. Eventually (I should have seen this coming.  I should have listened when my father told me not to marry a girl with fancy ideas and her nose in a book always. You and your militant lesbian friends and your university degrees and the rubbish you’ve been telling my child about me. Oh you’ll be sorry for this mark my words but then it’ll be too late to come crawling back because you’ll die a miserable dried up old wretch) he did.

At work I hugged the girls and cried. It was a relief to cry for the rest of the week, and the guilt I felt at having engineered the collapse of the twin towers to coincide with my life so I could weep at last was enormous and glassy. Especially when my daughter said, ‘couldn’t you have waited till I finished Year 12? You had to have your crisis now? Did I ask to be born?’

But she didn’t shut her bedroom door anymore. She came home from school earlier than usual and swung herself on to the bench top when I cooked dinner. Jeff Buckley sang Hallelujah on her stereo and the spaces felt free in my mind and there was so much time. So much time.

She filled the house with strange people. People with tattoos and spiky hair and pointy pierced things on their faces. She got drunk the day after Year 12 English and spewed and said, ‘oh my head,’ the next morning. Her friends called me by my first name and sat around the house even when she wasn’t there and I remembered my young mother and old sister tussling and hassling over this very thing – this ‘taking over’ of friends when the ages are no longer relevant. They went to the backyard and smoked cigarettes and offered me some. They swore at each other and grinned at me when I raised an eyebrow. Self-consciously, I tried not to have fun with them or show them how lovely and normal they were despite their reckless incandescent rage against the machine but she didn’t mind. She didn’t mind. How did this happen?

She sang and whistled all week, her clothes spilling through open doors, teasing me and laughing when I tried to clean and bring order to things. I liked this irreverence and impermanence. We ate bread and chips and listened to the Smashing Pumpkins sing about the resolute urgency of now. She lay on her tummy in the lounge and watched Oprah in the afternoons but not Dr Phil because he was a try hard and only seriously disturbed people would turn to a baldie for advice. She laughed hysterically at my most banal comments, especially when I tried out of long habit to shush her while looking around, and she said slyly, ‘I’m allowed.’ She asked me to proofread her essays and I smiled at the words she made up, because of course we needed a new language to explain this. We’d never been here before, just the two of us.

She rehearsed for the end of year school play and indulged me when I tried to help with her lines, saying, ‘I’ll make it up as I go Mum, no one cares and no one’s read the play.’ That evening, swishing with satin, black lace and fishnets, she stopped at the door and asked, ‘how do I look, neat freak?’ I turned away before she saw the shine threatening to spill. ‘Don’t be late and do wear something sexy Mother Teresa’ she called out, an arm gathering trails of green taffeta, a hand patting down an impossible beehive, somehow managing to fill the door with her tiny frame, theatrically expanded for tonight.

At school mums and dads stood outside the performing arts room with glasses of wine and stubbies, nodding to the ones they knew, including me in their smiles. They listed my daughter’s talents in this creation – beauty, strength and humour – and my heart sang. They asked me to come to their homes afterwards. ‘The kids,’ said someone, ‘will want to party all night,’ and someone else said, ‘As long as there’s some adult supervision, I think they’ve earned it.’ A tall woman with faint lines between her eyebrows said, ‘it’s Leavers next week. That’s what I worry about. Leavers. However will we get through that?’ A woman whose voice sounded like mine said ‘they’re allowed to be silly for a week surely,’ and they turned to me and said, ‘that’s a sensible way of looking at it I suppose, but we still stress though, don’t we, women do that?’

Included at last in this vocabulary of women, women who indulge and rollick with their children, women who flaunt their kindness and are careless with time, I wait for Calamity to walk through the door.

Rashida Murphy is an Indian-born Perth-based writer and poet, currently finishing a PhD in Writing from Edith Cowan University in Perth, Western Australia. Her work has appeared in anthologies and journals including The Westerly, Marginata, The West Australian, Poetry D’Amour, Other Voices and Sunshine of Ordinary Days. She has been invited to perform at Voicebox and Perth Poetry festival and won prizes and commendations for her short fiction. She is writing her second novel, due for completion in December 2014.

Tags: Diaspora, home, memory
From: Issue 8/Here and There: The diaspora universe
← More winters to pass
Death by Snow →
2 Comments Post a comment