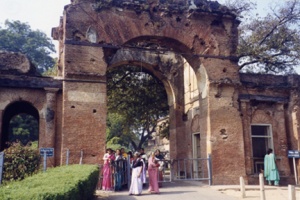 It was the census of 2011.  As part of my fieldwork as an anthropologist, I was accompanying a census enumerator – a brahmin whose day job was teaching in a local government school – on his official rounds in an almost entirely Dalit neighborhood of Lucknow north of the Gomti.  We stopped at the door of a man who sweeps a private hospital for his livelihood, and the enumerator asked him the usual series of questions until he got to column eight of the census form, which deals with religion.  “Ap Hindu hain, na?” (You’re Hindu, aren’t you?), he asked, deviating, as he routinely did, from the instructions of the enumerator’s manual, according to which the question should be “Ap ka dharm kya hai” or “What is your religion?”

A long silence ensued.  The hospital sweeper idly observed children playing in the alley while the enumerator began to fidget.  Finally the Dalit man said, “Yes, Hindu.”  Visibly perturbed by the man’s hesitation, the enumerator persisted, “You’re not, for instance, Lal Begi, are you?  Because, you know, there are Lal Begis who are Muslim.”  The man at the door then delivered a meandering discourse on the essential interchangeability of the terms Lal Begi, Balmiki, and the four or five other names by which his caste is known, without affirming or repudiating the alleged Muslim-ness of the caste.  The enumerator wrote “Hindu” in column eight of the census form and hurried on.

This was one of quite a few strangely tense conversations I witnessed between the enumerator – the local face of the state – and the residents of this Dalit neighborhood. In the ellipses and reverses in dialogue, in what was whispered and what was said loudly, in the shifting of glances and the tautness of vocal cords, stirred the ghosts of a century of state-backed Hindu reformist efforts to settle, once and for all, the religious identity of the so-called “sweeper castes.”  In the nineteenth century, these communities were known across north India (and in what is now Pakistan) as Lal Begi, followers of Lal Beg, a saint who, according to oral tradition, was created by Allah as a special prophet of the sanitation labor castes.  His rites and liturgy were kept largely secret, while his followers earned a reputation as “religious chameleons” for their capacity to adopt the outward appearance of whatever community dominated the locality – whether Hindu, Sikh, Muslim or Christian.

With the rise of enumerative politics in the first decades of the twentieth century, it began to matter a great deal how the sanitation labor castes – vast in number, and widely dispersed across the subcontinent – identified themselves religiously.  Were the Lal Begis the third largest sect of Muslims (after Sunnis and Shias), as the UP report of the 1901 census declared?  Or, as the census commissioner for Punjab reported the same year, were they a Sikh sect?  Or, as the Hindu Mahasabha and the Arya Samaj began increasingly to insist, were they actually Hindus?  Nothing short of the religious contours of the emergent nation hung in the balance: in some parts of Punjab, for example, the sanitation labor castes alone constituted ten percent of the overall population, and stood poised to make or break any religious community’s claim to a majority.

The results of the scramble for numbers in the 1920s and 1930s have so thoroughly attained the status of sociological commonsense that we often forget how recently this sense became common.  I came to Lucknow in 2011 with the understanding, based on previous visits and years of library research, that the days of “sweeper caste” syncretism were a distant memory at best: the Arya Samaj, often with generous support from the Congress, had long ago succeeded in persuading the Lal Begis to identify themselves as Hindu, to adopt the title Valmiki or Balmiki, and to sever their attachment to Lal Beg and the Islamic practices associated with him. The Presidential Order of 1950, which excluded any “person who professes a religion other than the Hindu religion” from recognition by the state as Scheduled Caste (and thus deserving redress for the structural social injustice of untouchability) had chiseled this then-novel state of affairs into the bedrock of law. Henceforth, the secular state had declared, all Dalits would be Hindu.

I was intrigued, then, to find the old Lal Begi conundrum still agitating Lucknow census enumerators sixty years after all that was supposed to have been settled.  I was even more intrigued when the friends I began to make in the Balmiki community led me to their Lal Beg shrines.  These were small but active shrines: shrines at which Muslims from neighboring bastis discreetly officiated, reading the fatihah and rendering sacrificial animals halal. The old caste prophet was not dead, after all. Rather, as one of my educators in the community put it, Lal Beg is revered today “underground.”  His shrines, which once carpeted the landscape of Hindustan from Sialkot to Benares, now remain only in pockets of north India, where they are often sequestered in the “backside” of bastis, far from the main road, next to the railroad tracks, or hidden indoors.  Lucknow and the villages of neighboring Bara Banki and Sitapur constitute one of the last remaining centers of the Lal Begi tradition.

The historiography of South Asia has two names for the Dalit engagement with Islam over the centuries: conversion and syncretism.  Virtually every subaltern caste has been plotted into one of these two narratives.  Historians have for the most part treated the Lal Begi case as one of syncretism; Amrit Lal Nagar’s novel Nachyo Bahut Gopal – mostly set in Lucknow – popularized the idea.  But what I was encountering in the Balmiki bastis of twenty-first century Lucknow spoke of a far deeper immersion in Islamic tradition than the sort of eclectic borrowing that the trope of syncretism usually suggests. It was not just that I routinely bumped into Balmiki friends participating in Lucknow’s Muharram processions, or that Balmiki women born before about 1960 had grown up keeping the fast for Ramzan, or that some older men still wore skullcaps as their fathers had, or that raising a bamboo pole for Ghazi Miyan continues to be de rigueur at most weddings within the caste.  Nor was it merely the fact that the Balmiki community of Lucknow has produced no less than a dozen professional qawwali bands, some of which perform at Shah Meena Shah and others of city’s famous dargahs. Rather, what struck me was the presence of Islam at home, in spaces of intimacy, vulnerability, and death. It was the photographs of Ajmer Sharif, the ka’aba in Mecca and the tomb of the prophet in Medina on the interior walls of people’s homes.  It was the way earlier generations of parents had named their children: the living grandmothers and grandfathers of today’s Priyankas and Deepaks are named Nazira, Fatima, Nabbu, and Ahmad.  It was the maulvi who was asked to recite Qur’anic prayers at the burial of the dead.

I am not trying to say that “these people are Muslim.”  This statement is no less misleading than our census enumerator’s conclusion – which, of course, has now graduated to statistical “fact” – that “these people are Hindu.”  Declarations of this sort imprison our thinking within the arid confines of governmental discourse, a world of tidy binaries that bears so little resemblance to the texture of life it purports to comprehend, represent, and govern.  Rather, what I am suggesting is that we need to leave behind such questions, and the assumptions underlying them, and adopt a different approach entirely, to gain an appreciation of the religious subjectivity of the man the enumerator was trying to fit into a census column.  The actual history of the Dalit engagement with Islam, past and present, remains to be understood.

Joel Lee is a PhD candidate in the Department of Anthropology, Columbia University, New York, USA.